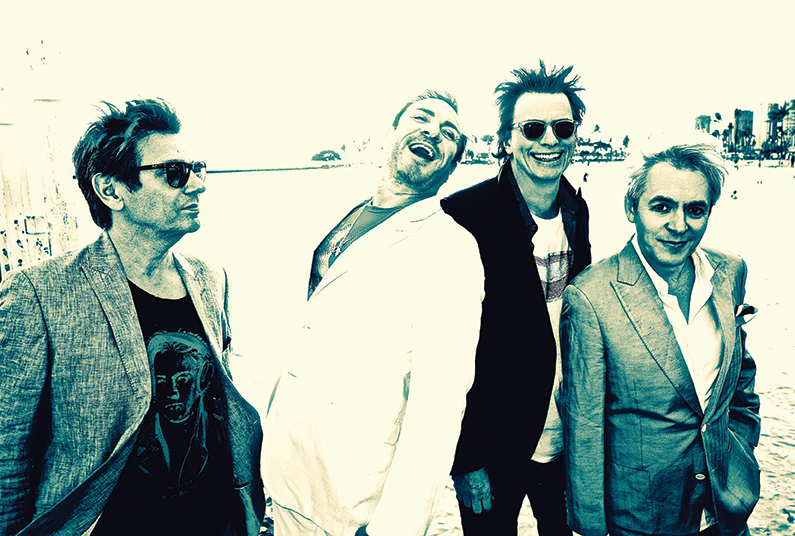 The birth Taro Compston-Le Bon. Events don’t come bigger than that, let me tell you.

Duran Duran is back in the Studio and working on new music.

I didn’t see much, but I liked the film “All the Money in the World." I thought it was brilliant

The BBC commissioned “Trust,” a 10-part television series with Hillary Swank & Donald Sutherland about the Getty family. It wasn’t particularly accurate in what happened, but it was brilliant.

“A Very British Scandal,” the true story about the homosexual affair the leader of the Liberal party, Jeremy Thorpe, had with a young man. It stars Hugh Grant & Ben Whishaw. It must be seen. It is so funny.

“Killing Eve” (with Sandra Oh, who is amazing in it) about a private hit-woman.

My favourite printed book was “The Stopping Places” by Damian Le Bas. Made me realize some of my prejudices and really made me think.

Audiobooks: “Places in the Darkness” by Chis Brookmyre, a very good science fiction story. I liked a book called “The Loney” by Andrew Michael Hurley very much. It is a fantastic book. Also, the “Chaos Walking Trilogy” by Patrick Ness. It’s a very clever premise, he is a very interesting writer.

I can tell you my favourite show this year was seeing the Rolling Stones in May at Queen Elizabeth Olympic Park.

Loved the fragrance launch, it was brilliant, and I think people like it. However, the BBC4 documentary was my highlight. When you’re in it, you don’t spend a lot of time looking back, you just see what is right in front of your face. It’s good to look back sometimes.

The next season of “Game of Thrones.”

Looking forward to shows at KAABOO Cayman, and in Miami, Las Vegas and New Orleans.

The band going back in to the studio – we’ve made a really good start, it’s exciting and we have a good team working with us too.

Event of the Year –

The World Cup was big in our house this year. It was a major event for us, and we had the relatives from Peru in town, who got in to the World Cup finals for the first-time ages.

I loved “Bohemian Rhapsody,” it was quite a strong experience for me.

As usual, it’s the biography world. I am a big WHO fan, and I really enjoyed “Thanks a lot Mr. Kibblewhite” by Roger Daltrey.

I don’t watch any series. I watch very little TV, more of a documentary watcher. I love watching Villa on TV, and we’re playing really well this year.

The only new thing that really grabbed me was “Girlfriend” by Christine and The Queens. It has a Michael Jackson feel to it. I’m such a big Michael fan, it moved me a little bit.

Going back in to the Studio, it really felt like it was time to do something. So, my Duran moment: sitting down, playing with the guys again, and making new music.

I also really enjoyed making the BBC 4 documentary: going back up to Birmingham and finding the places we started, which was interesting and emotional. When you’re younger, this stuff passes you by, but when you get older, you're lucky if you can look back at the important moments of your life.

Teaching Julian how to tie a necktie!

Working on the record again and bringing it to completion… going to Cayman Islands… our little mini tour of the America..getting back out and playing live again And who knows what else? It’s an open book!

I really had to give this one some thought…but actually the news item that got me jumping up and down with glee the most this year was France banning cell phones in schools. I think phones make school very challenging for teachers and it was gutsy of France to do it.

There are three (so far):

“Bohemian Rhapsody”; I felt like I had a personal stake in that film.

“Nico, 1988” was a really interesting presentation about Nico, who I didn’t rknow a lot about.

“Cold War” is a polish film, not exactly a musical, but has a lot of music in it. It is kind of about polish folk music. It is a beautiful film, and I recommend it.

The audio book I got the most from this year is called “The Power of Vulnerability” by Brené Brown. For anyone who is about to go in to something, and they’re not sure they have what it takes, this is a good listen. She is amazing, and has a great approach to self-realization.

The other book I will give an honourable mention to is “Enlightenment Now” by Steven Pinker. The book uses a lot of history to show us how far we have come.

I am obsessed with “Bosch,” particularly when I am away from Los Angeles. He is such a great detective character. I love the books, the audio books and the series.

I love “The Marvelous Mrs. Maisel” and I love Rachel Brosnahan. She is my favorite on TV right now.

I got in to "Killing Eve" also.

Those are my three favorites this year.

Quite a few songs on “Culture II” by Migos really got us going. I think “Narcos” was the song of the year in the Taylor household.

I want to give a mention to Chic’s “It’s About Time” album, some of it is really great.

I am a big fan of Julia Holter. She has an album out called “Aviary”.

I just got the Anderson.Paak album, “Oxnard,” and he’s one of my favourite artists, I just think he’s terrific.

For me, it was definitely the BBC documentary and the take-over in the UK. I know that it’s hard on fans around the world because you had to be in the UK to see it, but it was great fun for the band, talking about the music we grew up on, the music we saw on TV. The documentary was a lot of fun to do and everyone who saw it really seemed to love it.

I am going to name the presentation I gave at the Brilliant Minds symposium. I really had to step out of my comfort zone to do it. I am not a motivational speaker, but I got asked to do it, and I thought “alright, I am going to take the challenge.” I worked really hard on it, and a nod to Patty who worked with me on locking it down. I had a really good time doing it.

Well, we have a couple of gigs in February, which should be fun. We’ve changed the set up a little so there are a couple of different songs in the set, assuming rehearsals go ok!

We have started work on new material, I can tell you this: I am very excited about going back to this project. I think in March we will go back writing in the Studio.

I think we’re looking toward 2020, it’s a big year for Duran Duran and there would be nothing better to celebrate that legacy than with an album of new music.

I am steering clear of world events this year.

For me, so far, that would have to be that we went back in to the Studio to work on new material. I have to say, it has been so exciting, I think we have the start of something quite special.

It was a great year for exhibitions. I found them to be very nourishing. I went to a small museum that I’ve never been to before, the Dulwich Picture Gallery, and it really is an absolute gem of a small museum. I went to see the Jusepe de Ribera show. I was bowled over. Beautifully staged and curated, pretty much perfect.

I also saw the Picasso show at the Tate Modern. I almost didn’t go, since I’ve seen so many of his shows, but this exhibition was based on just ONE year (1932). It was a great concept.

I really liked a Polish movie called “Cold War.” Really beautifully done, post Second World War, really interesting time in Europe. A lot of music in it too. I highly recommend it.

I also saw “First Man,” which I really, really loved. When I went to Cape Canaveral (see below), they told me it was the most accurate movie they’d seen on Space.

I also liked “Hereditary.” It was really good and I enjoyed it even if it was derivative of other movies in that genre (horror).

I want to see half a dozen things, but a lot isn’t open here yet.

I always buy picture books, and this year, I bought a few books that are particularly good by my favorite new Japanese photographer, Daisuke Yokota. He makes exquisite handmade books. I think he is the most creative force to come out in quite a number of years. Very radical, inventive and modern.

I always wished I had more time for TV I think people are making incredible programming.

I watched a few documentaries; I enjoyed the Alexander McQueen and Vivienne Westwood programs. Everyone keeps saying I need to watch “Black Mirror,” that it’s made for me!

Our big TV event of the year, which was a chunk of the Duran time table this year, our BBC 4 Take Over Night. People really seemed to like it.

My favourite moment was going back in to the Studio with the band.

Also, the BBC Takeover was a good thing, and it was so kind of the BBC to give us a whole evening.

The other unusual thing we did was our fragrance launch, which was in October. My part of that was coordinating with the design team on the look and the packaging. That was fun.

Going to NASA at Cape Canaveral. WOW is all I can say. Everything about it was the “A” word! This is one of America’s great cultural gems. It is a mind boggling, exciting, exhilarating experience. Completely awe-inspiring.

I am very much looking forward to next year because a lot of things are going to come to fruition, I hope. John and I have finished the first draft of our musical, and I hope we will start to make some plans next year. I’ve been working with the Bloom Twins and I am very happy with that and super-excited to get Ctheir music) out there. My book got buried under many other things, but I am hoping my art book comes out next year. And my Japanese photography documentary will be getting in to shape next year. Most exciting of all will be going back in the studio with Duran. And 2019 is the build-up to the big ole anniversary in 2020!