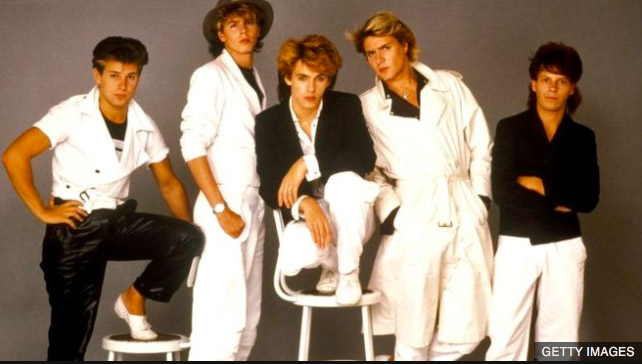 In the immortal words of Simon Le Bon: "Some people call it a one night stand but we can call it paradise."

Pop band Duran Duran are taking over BBC Four for one night in June, with a pair of newly-filmed documentaries.

The highlight is set to be Duran Duran: A Night In - which sees the band taking a Gogglebox-style trip through the TV, movies and adverts that inspired them.

Duran Duran: There's Something You Should Know will take an in-depth look at the band's turbulent history.

The documentary will feature previously unseen archive footage and rare demo tapes, as well as the group's memories of the 40 years that have passed since they first formed in 1978 in Birmingham.

Cindy Crawford, Boy George, Mark Ronson, and Nile Rodgers will all feature in the documentary, alongside Simon Le Bon, Nick Rhodes, John Taylor and Roger Taylor.
A Night In, meanwhile, will feature footage of Blade Runner, Barbarella, Tomorrow's World, Prince, Roxy Music and even kids' show Roobarb and Custard as the band take a trip down memory lane.

"Without the BBC, there would be no Duran Duran," said bassist John Taylor, in a statement announcing BBC Four's Boys on Film night.

"Forty years ago this October, the BBC first aired Barbarella. It was while watching that late-night screening of the Jane Fonda sci-fi epic that members of a burgeoning Birmingham post-punk band decided the name of one of the film's characters - Durand Durand - would make for a cool and unusual band name.

"The BBC provided us with a constant stream of the best contemporary music throughout the '70s, just when we were coming of age and finding ourselves as individuals and future artists. Everybody who was anybody went through the doors of Top of the Pops and The Old Grey Whistle Test, and we were there soaking it all in, so it is with great pleasure we present our curated night of music on BBC Four.

"These documentaries and clips have allowed us to explore the origins of the band through personal experiences and cultural touchstones. Even the savviest fans will find surprises."
Boys on Film - A Night with Duran Duran will be broadcast on BBC Four on Friday, 29 June, from 21:00 BST.