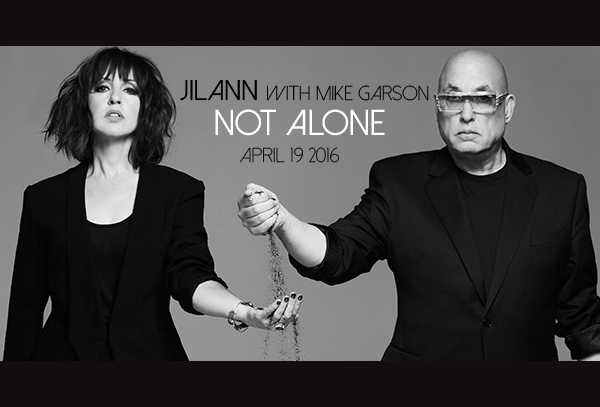 When you have the chance to reinterpret classics, do you take it? Ask American singer-songwriter Jilann, who has recorded NOT ALONE. Featuring David Bowie’s iconic pianist, Mike Garson, this album is both a labor of love as much as it is a riveting tribute to artists [Bowie, Roxy Music, TRex and Eno] of the Glam era.

While living between Los Angeles & Paris, Mike and Jilann worked on a series of recordings, putting together versions of some of her favorite songs, starting with Bowie’s ‘Lady Grinning Soul,’ on which Garson had played an extraordinarily haunting piano part. But it was their cover of Lou Reed’s ‘Perfect Day’ that ended up becoming a very pivotal recording, when she played it for Duran Duran bassist, John Taylor, who suggested expanding their vision to compile an album of glam covers, coining the phrase ‘the New Standards.' As an aficionado of the era, John immediately heard the potential for the project, and together they worked on a list of songs that included not only classics like ‘Time’ (Bowie/Garson) and ‘Rock n Roll Suicide,’ but also ‘Bitter Sweet’ (Roxy Music) and ‘The Slider’ (TRex).

John ended up co-producing the tracks ‘Rock ‘n’ Roll Suicide’ and ‘Lady Grinning Soul,’ working on the record whenever he had a moment’s downtime from Duran Duran’s own studio sessions. Entering the studio with his unique ear and enthusiasm, John brought a different approach to these classics, helping Jilann find new twists in her voice while keeping an expansive, more avant garde approach to the songs overall. And by the time they had finished, they had succeeded in turning these timeless tracks upside down. In fact, John lends his vocals to Jilann’s own evocative performance on the song ‘Quicksand.’ This intimate duet, underpinned by Mike’s eerie yet strong piano, is a poignant tribute.

Co-producing the remaining songs on the album with Jilann is her longtime collaborator Mike Farrell (Morrissey and Macy Gray), who acted as the anchor to her expansive vision. Alongside NOT ALONE, they have also been working on a collection of original songs titled ‘Owl Songs’ which is expected later this year.

To learn more about this album & Jilann please visit: