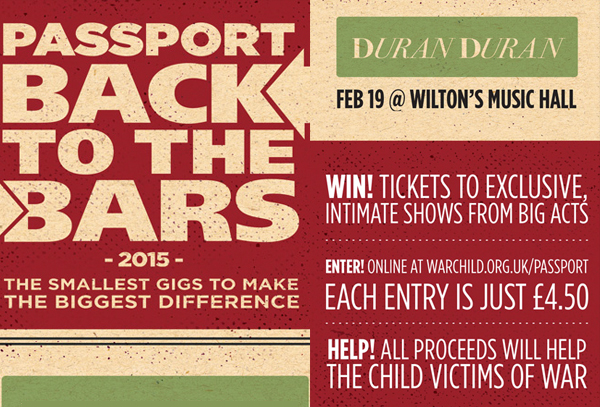 War Child and O2 present
PASSPORT BACK TO THE BARS
The smallest gigs… to make the biggest difference
February 16-24, 2015

War Child and O2 are proud to announce the incredible full line-up, dates and venues for Passport Back To The Bars, a week of one-off events offering incredible access to some of the biggest names in music in the most intimate venues – supporting War Child after an unprecedented year of violence for children in war zones.

Artists performing special shows include: Duran Duran, Elbow, Bastille, The Vaccines, You Me At Six and Ride (Mark Gardener and Andy Bell acoustic show). Each will be playing intimate venues including: Duran Duran gracing the splendour of Wilton’s Music Hall, London’s oldest remaining Grand Music Hall; Mark and Andy from Ride performing their first UK show together for over 20 years in the iconic surroundings of The 100 Club; Elbow returning to perform a stripped down set at the 200 capacity Roadhouse in Manchester, where they played their first gig as Elbow; Bastille putting on an incredibly intimate show for 100 lucky people in a living room in North London; The Vaccines performing their smallest London pub gig since their debut show in the capital; You Me At Six following their headline O2 show a week later with a show to fifty times fewer fans!

Produced by War Child, O2, the Music Managers Forum and part of BRITs Week 2015, these will be the smallest gigs making the biggest difference.

Tickets to all shows are available by lottery. Lottery tickets are available now from www.warchild.org.uk/passport or by texting the bands' keyword to 88450. Each entry costs £4.50 and gives a chance of winning a pair of tickets to the chosen show. And each entry makes an important donation to War Child, with all profits going to help the child victims of war.

The full line up details:

Lottery tickets to all shows are available from www.warchild.org.uk/passport lottery closes on SUNDAY, FEBRUARY 8 at midnight.

The Duran Duran Fan Community will be giving away one pair of tickets to a member in good standing. If you are able to ATTEND please email [email protected] with “War Child” in the subject line and we will pick a winner at random on February 3rd. The winner will have 24 hours to accept the tickets before we move on to the next randomly selected Fan Community member.

All venues are tiny – between 100 and 300 capacity – giving fans amazing close-up access.

This marks ten years since War Child’s original Passport Back To The Bars shows for victims of the Iraq war, when acts included The Cure, David Gray, Elbow, Pet Shop Boys, Supergrass and Amy Winehouse.

All the money raised will support War Child’s vital work saving children from the brutal effects of war including Syria, Iraq and Gaza. These stripped back, intimate shows for a few hundred fans will have a life-changing impact for thousands of vulnerable children.

Ben Knowles, War Child's Director of Music, says: "Many people in music spoke to War Child about wanting to do something in response to the crisis for children in Iraq, Syria, Gaza and other places. This response from so many great acts, doing something unique to encourage fans to support War Child is incredible. These will be the smallest gigs that can make the biggest difference. We thank all the acts, O2, MMF and The BRITs for all their support."