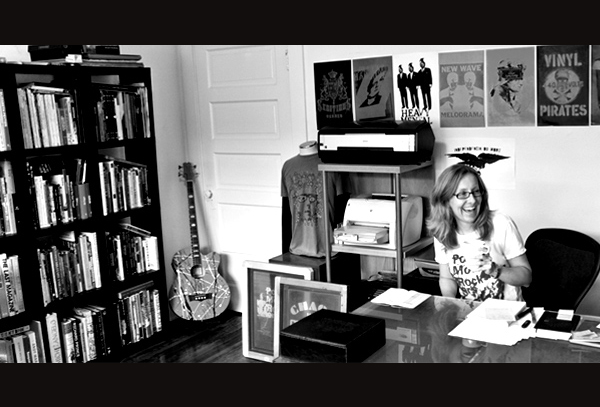 An excerpt from the Fan Community Q&A with designer/artist Patty Palazzo, who really, needs no introduction!!

OK, so we know a lot about you already, you have been part of the Duran team for how long now?

I first started working with John (solo) in late 1995 and first started to work as part of the Duran team in 2003 when the reunion came about.

How did you move from working as John's assistant to becoming a designer?

Design was always my main thing as that is what I studied at art school, but when I first started working with John he had just embarked on a solo career. It happened that there were many roles to fill at the time, and I actually morphed from designer into assistant/designer. After many years of balancing the two, I eventually moved back into the role of just designer.

Tell us about the genesis of Punk Masters?

It grew from the work I did at Juicy Couture for eight years designing women's graphics and developing the men's line. John and I did a lot of logo and t-shirt graphics work for the men's line for about 4 of those years, and it was during this time that I realized how much I loved working in that medium. I started to experiment at home with screen printing, and I loved it. The Juicy men's line sadly came to an end in late 2008, so I began to toy with the idea of starting my own line to continue in this vein that I found so inspiring. I liked the idea of not only designing my own tees but printing them as well…. a commercial venture, but one where I could get down and dirty and still create art.

Tell us about your "In the Pleasure Groove" line of tees from 2012 that benefited Roadrecovery.org.

It started when I designed a promo tee that Crewe Issue printed for John's first signings in the UK (the "Welcome To The Pleasure Groove" tee.) That was just a one-off, but John and I had such fun working on the design for the book we thought about collaborating on a collection to release through Punk Masters. We compiled our favorite chapter titles and images, then I went off and put together a bunch of ideas. From there the two of us narrowed it down and fine tuned them all. We had a lot of fun doing it, and it was a terrific way to celebrate John's book. And even better is that a portion of the proceeds goes to Road Recovery, a great organization John is very supportive of.

What's next for Punk Masters?

I have a new line coming out in March, so the timing of this Q&A is pretty good! And eventually I'd like to offer art prints of some of the more popular designs.

Previous Article
The Smallest Gigs… to Make the Biggest Difference. Duran Duran Perform in Support of War Child
Next Article
A Note from Nick
News
Back to all news