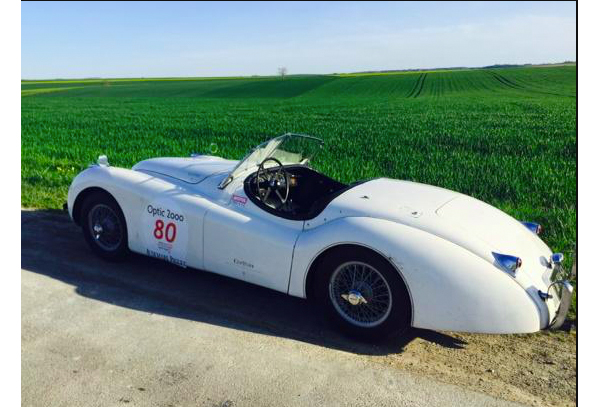 The upcoming Tour Auto Rally 2015 begins next week, on April 20th, running through April 25th. Organized by Peter Auto, the 24th edition of the Tour de France Automobile retrospective will see 225 automobiles compete against one another over race circuits and multiple stages on closed roads.

Simon will be the co-driver on "P," a Jaguar XK120, which is the oldest car in the Rally. Simon will be driving with Francois Pourcher and their car is sponsored by Maison Corthay shoes and Cifonelli.

The 2000 mile rally will begin in Paris and end in the gorgeous city of Biarritz, with stops at four different tracks along the way.

As is tradition, the 2015 Tour Auto Optic 2ooo will begin on Monday, April 20 by a not-to-be missed day when the competing cars will be displayed in Paris. The next day (Tuesday, April 21), competitors will start from the capital for five days of discovery along the French secondary roads, marked by timed sessions on circuits and road stages closed sections. The finish flag will be waived on Saturday, April 25 on the evening of the last leg.

Simon is not allowed to have any phones in the car with him, as it is considered a navigational device, but hopefully we will see some footage along the way!