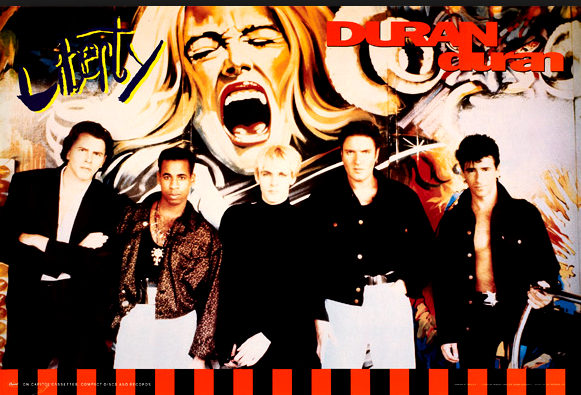 “Violence of Summer” was the first single, and it is a very un-Duran Duran like song. It was in your face. I remember reading in a music paper that Phil Collins said it didn’t sound like a Duran Duran song, so I buttonholed him about it once. He said it just didn’t sound like us. There was something a bit rude about the song that I quite liked.

I think “Serious” is one of the best songs we’ve ever written, and, in fact, it was Robert Palmer’s favorite Duran Duran song. Ferry Corsten used “Serious” as a sample on his song “Fire,” and that was a dance hit for him.

“My Antactica” is one of my favorite Duran Duran songs, ever. If we ever did “Duran Duran as Pink Floyd esoteric,” that would be in the set. I would love to suggest we learn that one up as an alternative to “Save A Prayer.” It’s a beautiful and emotional song. It’s important to me not to say what the song is about because the song is the statement. Other people’s interpretation is what matters, and it can spoil it for them if I was to say, “No, it’s about this.”

I love the song “Venice Drowning” too. I was quite proud of that one. It was my sort of sexy-zombie-vampire song.

There are some things I wasn’t crazy about on the album, like “First Impression,” which wasn’t from my heart. I didn’t love “All Across the Water” either. I think the issue with LIBERTY is that we were in a transition and there were some tracks that didn’t have our whole heart in it.

The album came at a difficult time, when a lot of the world was saying, “We don’t want any more Duran Duran, we’ve had enough of you.” Of course, we refused to go away. I wouldn’t go back and change anything though, I’d rather spend two weeks writing a new song then making changes to LIBERTY. It was a point in time for Duran Duran. I really do look back on LIBERTY with a lot of fondness."

Previous Article
Hear Duran Duran’s New Electro-Pop Ballad, ‘What Are the Chances’
Next Article
Duran Duran’s ‘Paper Gods’ Track “What Are The Chances”: Idolator Premiere
News
Back to all news