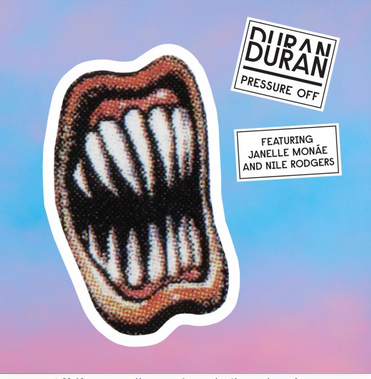 In the last few years, the first great pop single of the year has emerged relatively early in the year. Last year, we started to notice a delay in the emergence of new pop music brilliance. “Extraordinary” by Clean Bandit featuring Sharna Bass (2014’s first great pop single) only saw the light of day in April. To say that 2015 has been a tragically underwhelming year for pop music would be quite the understatement. Earlier this year, when we got a short low-quality preview of the new Duran Duran single title “Pressure Off” (featuring Janelle Monae), we had a feeling that these pop/rock veterans just might be the saviors of pop music in 2015. After having listened to a full-length high-quality clip of “Pressure Off“, we are convinced beyond doubt that Duran Duran is here to save the day.

“Pressure Off” is the lead single to “Paper Gods” – the first studio album by Duran Duran since 2010’s “All You Need Is Now” – an album that both critics and fans have applauded and referred to as being the sonic sequel to “Rio” – one of the career-defining albums of the band – and the album that propelled the band into the upper echelons of pop/rock royalty. One listen of “Pressure Off” suggests that it might be the sonic sequel to “Notorious” – a single that brought the band’s “inner funk” to the forefront and to the ears of fans across the globe. This should not be a huge surprise given that production maestro Nile Rodgers is at the helm of production on “Pressure Off” – just as he was on “Notorious“.

The song kicks off with a funk-fueled intro reminiscent of “Notorious“, applause of the type one would hear at a stadium, and a synthesized variant of lead singer Simon Le Bon’s vocals. On the song’s verses, Simon Le Bon’s vocals effortlessly mesh with an incredibly well-constructed groove leading to a sing-out-loud and supremely addictive chorus:

Do not be surprised if you find yourself singing the “Oh-Oh-Oh-Oh-Oh-Oh Oh-Oh-Oh-Oh-Oh-Oh ..it’s up to you now, it’s time time to take the pressure off” bits over and over again in your head. Duran Duran has always had the knack to churn out fantastic choruses and it looks like their ability to do so only gets better with time.

The song’s highlight is without a doubt its delectable Middle 8. It predominantly features Janelle Monae on vocals, bold strokes of strings, and an applause similar to the one featured in the song’s intro giving the listener a real feel for what this song will sound like in concert. It goes without saying that this song (especially the Middle 8) will sound beyond epic in a live setting.

One of the recurring elements of the Duran Duran brand and legacy is the band’s “surprise factor”. The band’s first surprise was in the early 90s when they had an unlikely resurgence with radio hits such as “Ordinary World” and “Come Undone“. The second surprise was in 2004 when the original five members reunited to record new material and tour – and it appeared that the chemistry between the members and their commercial appeal had remained intact after two decades. The third surprise was with their last album “All You Need Is Now“. With that album, Duran Duran had re-embraced what made them unique and with the help of hit-producer Mark Ronson, were able to simultaneously straddle their new wave sound and modernity. Their latest surprise is “Pressure Off” – a song that 2015 so desperately needs and could very well be the band’s segue back to dance clubs. In an interview from over a decade ago, the band’s keyboard player Nick Rhodes claimed that Duran Duran’s sonic vision in the early days revolved around creating rock music from the dancefloor. They did that successfully the first time around and it looks like they have everything it takes to bring this invigorating blend of “funk meets rock meets dance” back to the dancefloor.

We are elated by Duran Duran’s tenacity and artistic ethic.”‘Pressure Off” is an amazing appetizer to what we hope is a fantastic album. “Paper Gods” cannot arrive soon enough. Finally, we congratulate Duran Duran for presenting to the world 2015’s first great pop/rock single.