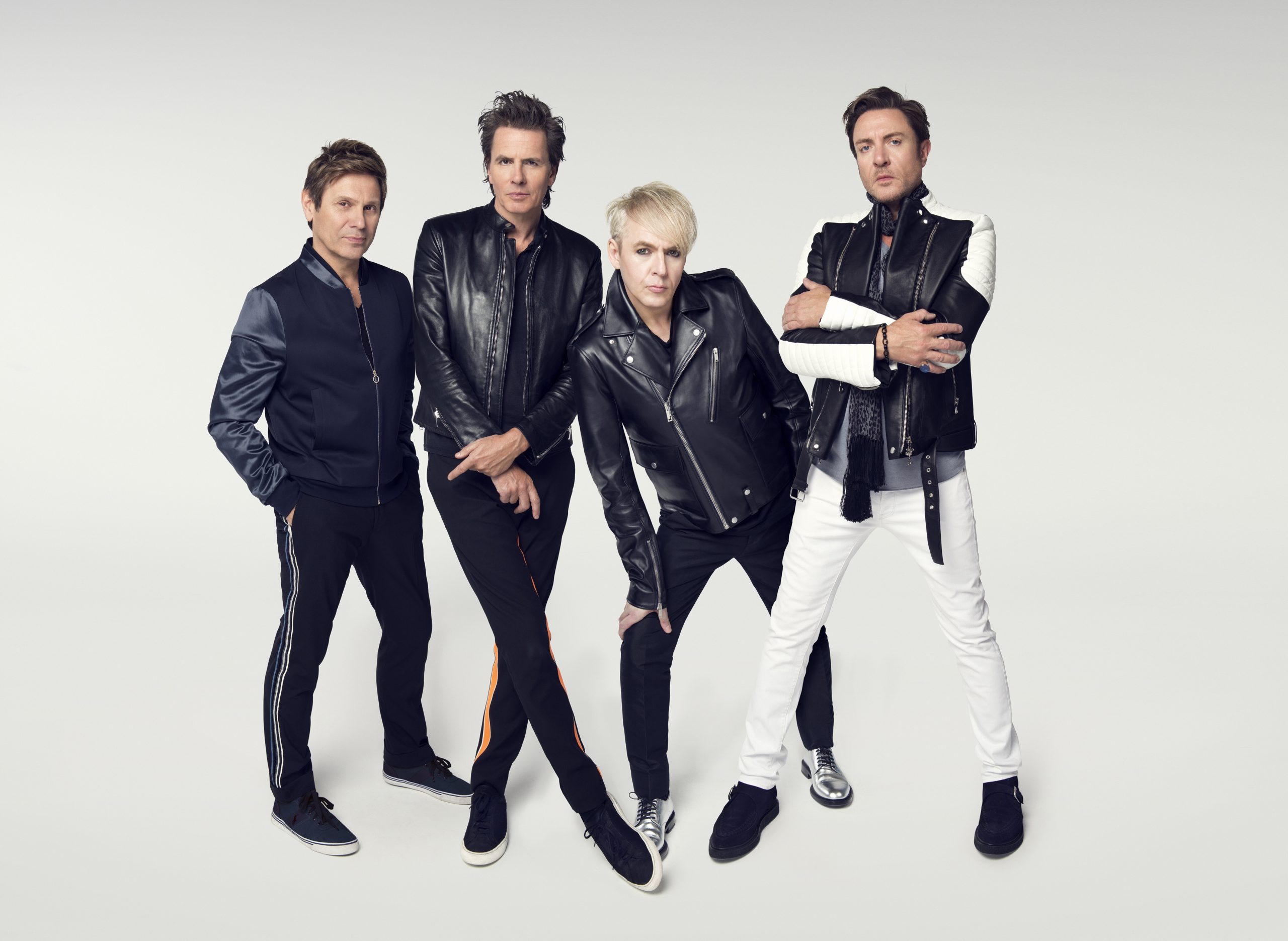 Duran Duran singer and frontman Simon LeBon says that when the definitive 1980s British New Wave band began to record its latest album, "Paper Gods," it had one goal: "All we could think of was that we wanted it to be more funky," he says.

"We wanted to do something different from the previous album … a bit more danceable," Le Bon says. "We love to have some kind of presence on the dance floor. Well, maybe it's just that we love to see our fans dancing in the crowd when we play live, you know? It's kind of important for us.

"So we went out [and] that was our main kind of objective when we started."

Over nearly two years, through myriad producers and a search for a label to put out the disc, the band has done just that.

"Paper Gods," set for release Sept. 11, captures the defining sound that in the 1980s resulted in Duran Duran selling 10 million albums in the United States alone and having a dozen Top 20 songs, including the chart-toppers "Hungry Like the Wolf," "The Reflex" and "A View to a Kill."

The disc also breaks new ground for the band, as evidenced by its first single, the electronic dance music-tinged "Pressure Off" with funky American singer Janelle Monae and producer/Chic guitarist Nile Rodgers.

Duran Duran likely will give the audience a taste of the new disc when it headlines Musikfest's Steel Stage Thursday night in a preview show for the 10-day Bethlehem music festival. It also will be a preview of sorts for the band — the last of three U.S. shows before formally kicking off its tour in Ibiza, Spain, in September.

Le Bon, in a phone call from London, says Duran Duran knows not to stray too far from the sound that made it a hit.

"You've got to think about all your fans," Le Bon says. "And the first ones you've got to look after are the ones who've been with you for years and years and years." By those, he means the fans who have followed Duran Duran since its video-ready image made the band a huge MTV star and set the standard for a generation of New Romantics bands.

Those fans, Le Bon says, are the same ones who "gave thumbs down" to Duran Duran's 2007 album "Red Carpet Massacre."

By contrast, the band's last album, 2011's "All You Need Is Now," "definitely connected with our fans," he says. "They felt it was our and [producer] Mark Ronson's attempt for Duran Duran to reclaim the '80s. And that worked really well with our fans — they loved that one."

Le Bon says Duran Duran realized it couldn't do the same thing with the new disc, but "had to develop the idea and do something — well, guess that the fans would be proud of. You always want your fans to be proud of you as a band, because really you belong to them."

At this stage of its career, after 35 years and 13 studio albums (half of them gold or platinum) — and no record label to which it had to answer — Duran Duran had the luxury of time in making the new disc, Le Bon says.

"We went into the studio in 2013 and the one thing that we knew was that we were not going to put it out until it was finished and it was something that we were really, really happy with. And it didn't matter to us how long that was going to take."

Le Bon says the band started its time in the studio with Ronson producing, "and it seemed to be going great. For two weeks we wrote loads and loads of bits of music." But Le Bon said Ronson had to leave to work on his own album.

"And we absolutely thought that was a fantastic idea, so we sent some tracks to him which he worked on in L.A. completely on his own — well, with his engineers and stuff. And we got it back and we loved what he did on those tracks. He made a big difference."

Le Bon says that when Ronson returned, he heard Frusciante's work and said, "Why don't we get like some more guitarists to play with you?" And the first name that came up was Nile Rodgers.

In the meantime, Le Bon says, Duran Duran connected with British recording artist and producer Mr Hudson, and "he really did something incredible: He … was the kind of glue that brought the album together. Stopped it being just a bunch of songs and turned it into an album with a real direction and purpose."

Ronson brought in Rodgers, whom Le Bon says added "something very special … this amazing energy. There's a joy — a joyfulness about the way he plays and performs, and that brings everybody really together, because it's a hell of a lot of fun.

"You know, the first day he came to work with us, he got stuck in a traffic jam for five hours because they closed some bridges in London. It took him five hours to get to the studio from his hotel, but he still came up with the riff that is 'Pressure Off,' that we base the whole song on. It was amazing."

"We knew we were looking for a deal with a major company … because we felt that we needed investment," he says. "And we would rather go for a company which would invest in our career rather than the kind of deal where you get more per record you sell, but they don't … have the kind of weight to push the band and push the career of the band.

"We'd had our experiences with Sony Records and we finished with them and we didn't want to go back there. So it was really, in terms of majors, it was between Universal and Warner Brothers, because they're the only other two."

The band learned that Warner Music UK bought Duran Duran's back catalog, "so they seemed like the natural partner for us." When Warner Brother Records in the United States heard the music, they "just basically said, 'I have to have this record,'" Le Bon says.

"So it was probably the easiest deal we'd ever done in terms of that. And I think we've got confidence in our music, and we were quite happy to wait until we had a record that would say everything so that we didn't have to try and sell ourselves. We just let the music speak for itself.

"There seemed to be a natural rhythm to the way that everything was happening. And it hasn't been forced and … it just feels like it's happening at the right pace. It's coming out, it seems to us, at exactly the right time. Yeah, we would have loved to put it out a year before, but … now it feels good to us.

Asked about the tinge of EDM in "Pressure Off," Le Bon responds, "I think there's an element of Duran Duran in EDM. I think that's a very natural kind of direction for us to take." He says Duran Duran keyboardist Nick Rhodes "is incredible. … his presence on a Duran Duran album is always extraordinary. You can always hear him … he has great ideas."

For example, on the new song "You Kill Me with Silence," Le Bon says, "at the end of it, it goes into a solo. Now, a lot of people think that's a guitar solo — it's not. It's a keyboard solo. And it's one of the best things he's ever played."

It's not only electronic dance music in which Le Bon hears Duran Duran's influence.

"There are bands like, say The Killers, Block Party, who really remind me of Duran Duran," he says. "Franz Ferdinand. You know, a lot of the bands in the last 10 years have gone for — they've taken their inspiration from — '80s bands. And we were such a big part of that, we couldn't really not be in their sound."

Le Bon, who is 56, says he believes that, just as it has with "Paper Gods," Duran Duran can continue to make new-sounding and relevant music. The band's other members are ages 53-55.

"We probably work at a different rate now than we did when we first started, but I don't think about it on a day-to-day basis," he says. "While we've got the energy and the inclination to make new records and to go out on tour and to play them, I think we should do that."

He says he thinks the fact that Duran Duran has survived this long with its core members (which also include drummer Roger Taylor; only guitarist Andy Taylor, who left in 2007, is missing from the band's classic lineup) has helped extend its life.

"It's important to have that kind of thing going on," he says. "Look at The Rolling Stones. I don't think they would still be doing it if they weren't all together. You know, maybe Mick would, as a solo artist. But they all keep each other excited. They keep each other feeling that they've got something to prove — to each other and to everybody else.

"I think it's amazing how being with a group of people, it gives you energy and it gives you goals that you feel you can achieve. Because that's the kind of s--- that keeps you young, you know, in your heart.

"Honestly, I believe it's one of the things that extends your life. And we all want to live as long as we possibly can, don't we?"