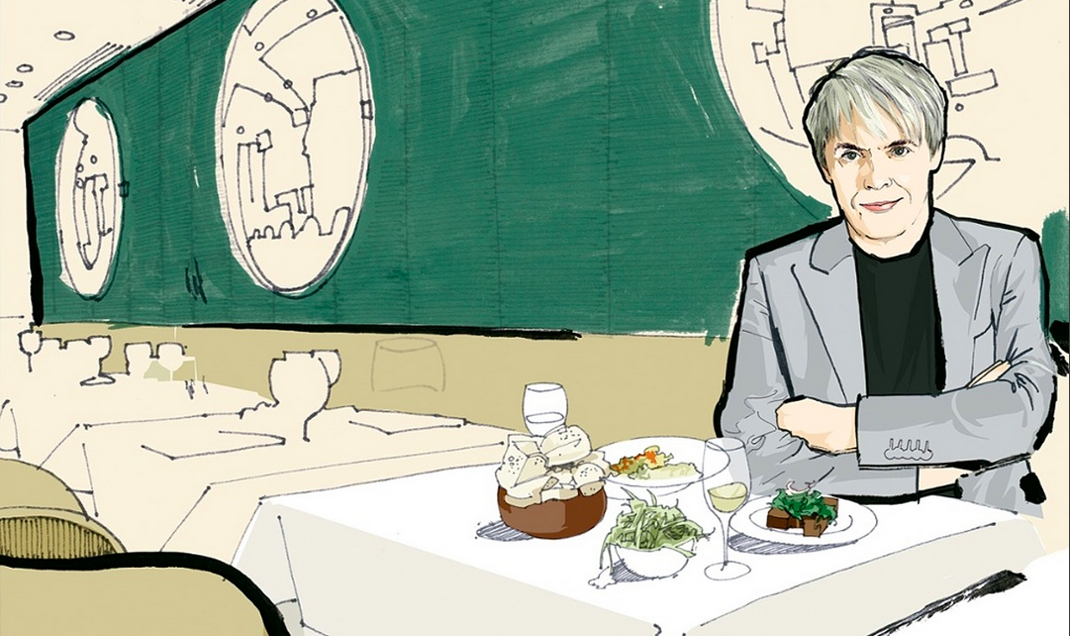 Nick Rhodes arrives at Locanda Locatelli in a black suit and white-blond hair swept to one side of his forehead. Occasionally, he will raise a hand to smooth it down, patting away stray strands with surprisingly delicate fingers.

Rhodes recently read that men who keep their hair into older age will often try to maintain the same haircut they had when they were most successful.

“I laughed and thought: ‘Christ! Does my hair still look like it did in 1980-whatever?”

I maintain a diplomatic silence, but I’m thinking: yes, Nick, yes it does.

Rhodes, the keyboardist for Duran Duran since the band’s formation in 1978, is now 53 and the group released their 14th album, Paper Gods, this month. Throughout it all, Rhodes’s hair has stayed more or less the same: a beacon of follicular stability in an ever-changing world.

So what conclusion did he draw about his own barnet after reading the article?

“It prompted me to get a haircut,” he replies.

To be fair to Rhodes, the hair is an integral part of his identity. It would be hard to imagine him any other way than the foppish, cheek-boned, blond one sporting eyeliner and a pastel blue suit in the 1982 video for Rio, posing on board a speeding yacht as Simon Le Bon sings about cherry ice-cream and dancing on the sand.

Rhodes has always had a keen eye for the aesthetic detail and enjoys a side career as a photographer. On his first trip to New York with the band in 1981, he had lunch with Andy Warhol who became a friend and mentor until his death six years later.

“I learned a lot from him, to be sure. He was so much smarter and hipper than anyone my age that I knew outside my band. He was so switched on and eternally curious.”

When the sommelier arrives with our wine to accompany a bowl of zucchine fritte, I mention it’s got a nice label. Rhodes nods enthusiastically as if I’ve said something terribly profound.

“Yes, doesn’t it? I always judge a bottle of wine by its label because it shows that it’s made by people who care about the tiniest details.” He pauses. “I’m sure other people would say, ‘Oh, you’re as shallow as a puddle.’”

He giggles like a small boy. We order our starters – both opting for the tuna and borlotti bean salad.

You can see Rhodes making a mental effort to choose the most healthy thing on the menu, but then being overwhelmed by choice. For his main course, he asks for a tasting selection of three pastas, even though he feels guilty about the carbs.

“I’m going to the studio after this, I can’t!” he protests, as another glass of wine is poured. The wine continues its progress. Rhodes proceeds to drink it.

He enjoys food, especially Italian, and this is one of his favourite restaurants in London. He has a Sicilian girlfriend, Nefer, which helps too: “It’s like someone stuck a pin in the map and said, ‘Let’s put all the greatest food in the world here. And it’s in Sicily.”

Nefer does most of the cooking at the couple’s home in Chelsea. His favourite dish is penne alla norma, made with tomatoes, fried aubergine, grated ricotta salata cheese and basil.

“When you have a Sicilian girlfriend, there’s no point in pretending I can cook,” Rhodes concedes. “She can cook everything. I’ll say, ‘How do you know how to do that?’ And she shrugs and says: ‘I don’t know. I never made it before.’ It’s in the DNA.”

Growing up in Birmingham in the 1960s didn’t afford many opportunities for gastronomic adventure. His mother once gave him a sip of tea as a baby and he spat it out with such vehemence that he has never drunk tea or coffee since.

“It seems so complicated having to have so many cups of tea and coffee every day,” he says. His father, Roger, was an engineer and his mother, Sylvia, ran a toy shop. Rhodes helped out at weekends – the most popular toys were the Six Million Dollar Man doll and “this ghastly thing called Stretch Armstrong” – and even won a national prize for window-dressing when he was 12.

“It tells you all you need to know, doesn’t it?” he says. “I started life as a window dresser and I never really changed, I guess.”
Advertisement

Indeed. When Duran Duran were at the height of their fame, Rhodes gained a reputation as a dandy. He invested in designer menswear – everything from Jean Paul Gaultier to Yohji Yamamoto and revelled in the individualism of the 80s, whereas now he worries everyone just wants to look the same.

Yet throughout those years of heady excess, Rhodes more or less kept his level-headedness (he admits to once having bought a Picasso on his AmEx but it was “just a little one”).

His indulgences were never dangerous but Rhodes watched his childhood best friend and the band’s bass guitarist, John Taylor, spiral out of control with drug and alcohol addiction. Rhodes’s eyes become sad. It was, he says with some understatement, “enormously worrying”. Eventually, Taylor got clean. They are still best friends: both are only children and Rhodes describes Taylor as his adopted brother. The band just about stayed together and along the way they all got married and had children – Rhodes has a 29-year-old daughter from his marriage to American heiress Julie Anne Friedman. All of them, bar Le Bon, got divorced.

Rhodes describes the relationship with his bandmates as being like a marriage that has gone the distance: the key is to allow everyone to follow their own interests while pursuing their shared creative goals. “I don’t think we’ve ever forgotten our beginnings,” he says. “I think it’s important to understand where you’ve come from, what you’re roots are – both socially and musically.”

He worries that modern fame is a vacuum: “I struggle with what it is and why it exists … The people who were famous when I was a kid were people who invented penicillin and world leaders. Now you’re famous because you’re screaming at someone living in a house while being watched on television. It doesn’t make any sense.”

What does he make of television talent programmes like the X Factor?“What I think is a shame is that there are now whole generations that don’t have anything their parents don’t like, to [be able to] say: ‘That’s us. We’re mods or rockers or whatever.’ Instead they have The X Factor and say ‘This person won this week’. There’s a lot of good things out there but it just seems they don’t have as much impact.”

He takes a sip of wine.

“Who was the last British band to come up of interest? Arctic Monkeys?” he asks rhetorically. “Before that, Radiohead? I think the format of the band has lived out its most precious days. Music’s changed. It’s much more computers, hip hop and EDM.”

EDM? I rack my brains. A parliamentary Early Day Motion?

Rhodes guffaws. “Oh, I like that! No, electronic dance music.”

Unexpectedly, he reveals he loves watching Prime Minister’s Questions because “it’s damn funny. It’s like Monty Python and Private Eye all rolled together.”

Was he surprised by the Tories winning an outright majority?

“I think the Labour position was untenable this time so, no, I was not surprised at all. If you look at what’s happened to the economy and the disastrous state we were in, we’re in a better state now and that’s just a fact.”

We decline pudding, but the ever-attentive maitre d’ brings us a selection of petits fours. I wonder whether, looking back over the 36 years Duran Duran have been in the business, Rhodes feels any of them has fundamentally changed?

“I think we’re more exaggerated versions of whatever we were,” he answers after a moment’s reflection. “John is ambitious and proud and anxious and sweet. Simon has attention deficit and really cares about people. Roger [Taylor] is charming, balanced, measured and reliable.”

And what about Rhodes? He gives an impish grin.

He reaches for a chocolate truffle. “You’d have to ask them. And I’d dread to think what they’d say.”

Previous Article
Monday, September 07, 2015 Fashion How Duran Duran’s Simon Le Bon Got His Signature Look
Next Article
All Access Review of iHeartRadio Festival
News
Back to all news