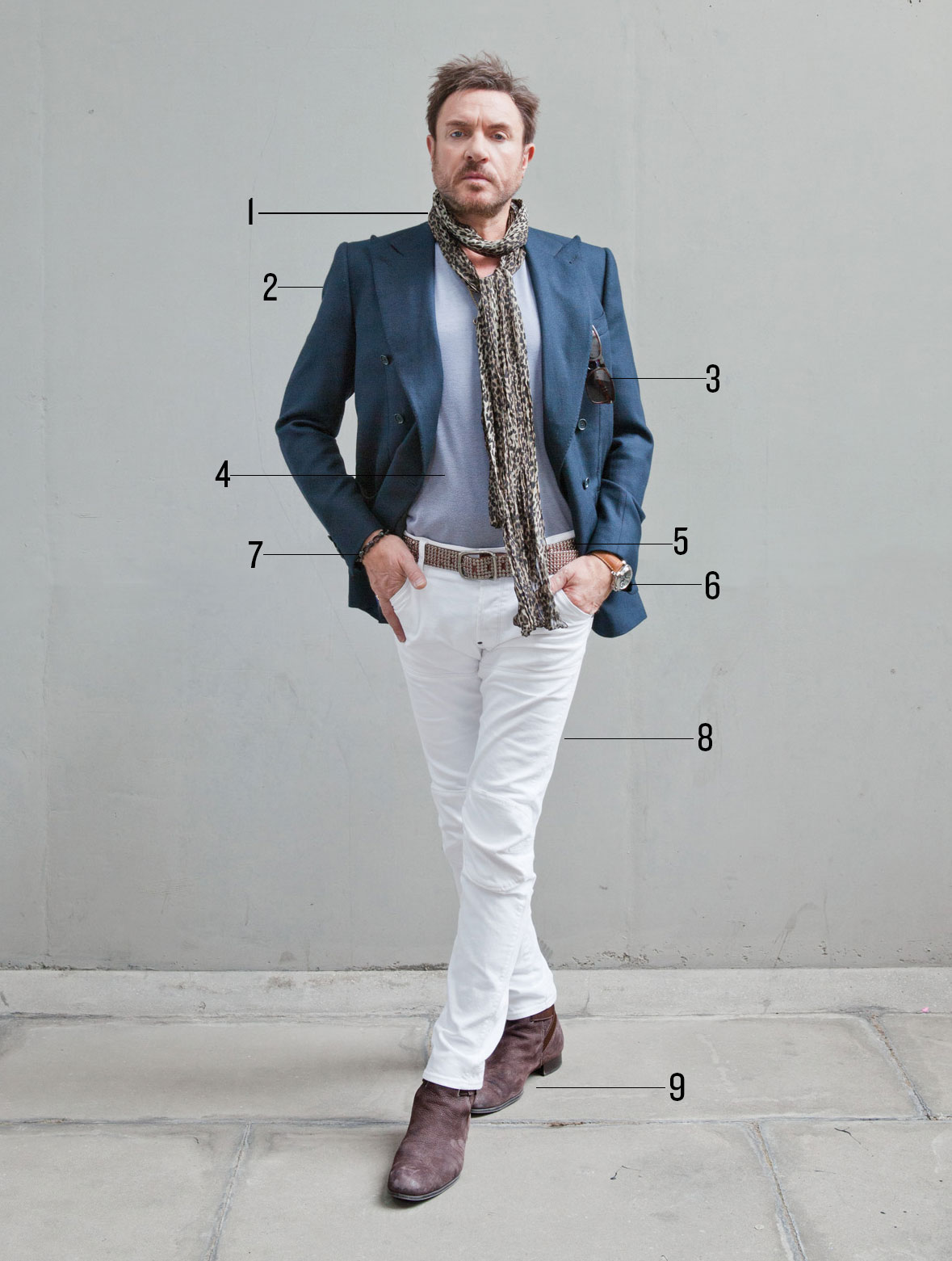 The rocker breaks down his off-stage style.
BY Dean Mayo Davies

Best known for making headbands and frosted locks safe for the masses in the eighties, Le Bon has a history of being dressed by punk fashion's greatest, from Stephen Sprouse to Vivienne Westwood. With Duran Duran's 14th album, Paper Gods, out this month—and a run of U.S. shows to follow—we caught up with the frontman to find out what he's wearing these days when he's not on stage.

1. The Scarf
"Shirts with collars tend to de-rock-and-roll me, so I wear T-shirts and scarves. This Saint Laurent ['Babycat' print, from its permanent collection] is fabulous. John [Taylor, Duran Duran's bassist] and his wife, Gela, gave me one in gray as a present, but this classic leopard is ideal."

2. The Jacket
"This jacket is by a company called Cifonelli, a Parisian tailor since 1880. I did a car race, the Tour Auto Optic 2000, and they offered to put me in one of their jackets, and I said, 'Yes, I'll have that one, please.' It's really soft and really comfortable and very double-breasted. I like double-breasted jackets with great big lapels—it's a look that might take over for me."

3. The Sunglasses
"They're prescription Persol, from David Clulow Opticians on Wigmore Street in London. They're very sweet to me there. One lens is for distance vision, the other is for reading. It's quite a weird experience when you put them on, but you get used to it."

4. The T-shirt
"I'm in a lovely silvery-gray V-neck because it went with my look today, but I usually wear Punk Masters. Patty Palazzo has by far the best logos and pictures in her designs. She's got a real sense of humor. I like T-shirts with a story, but it's got to be clever—there's a lot who try and it doesn't come off. Punk Masters do it better than anyone."

5. The Belt
"I got this belt in New York. It's Moroccan leather with hammered metal rivets. It sets all the alarms off at the airport."

6. The Watch
"I'm wearing a Panerai watch—they actually own the boat that we filmed the video for 'Rio' on. I've got six watches, and I usually get one out and keep it on all day. They're all quite big. I don't really have 'evening' watches that I swap into. My others are by Rolex, Omega, and Bulgari."

7. The Jewelry
"Jewelry has to be sentimental. I prefer to be given it rather than buy. I also believe in mixing metals—it looks a bit contrived if I wear all gold or all silver. My chain is by Zara Simon; it has labradorite and crab's-claw charms on it. She gave it to me for my birthday. My signet ring is a blue glass intaglio of the Medusa, which you can use as a stamp seal. I did once and spent an hour and a half picking the solidified wax out of it. I wouldn't recommend that. The bracelet is by Stephen Webster; there are thorns hidden in each link."

8. The Jeans
"I like skinny jeans. I tend to buy a lot at once, put them into storage, and forget. Then I buy more. These are G-Star. I'm going to wear white pants on the next tour, definitely—I like the way white shows up on stage."

9. The Boots
"I acquired these at a shoot. They're old Louis Vuitton. They were slightly the wrong size for me and quite tight when I got them, but I've worn them so much, now they're fantastic. They have the ideal toe shape. I was thinking of taking them to a bespoke shoemaker. Without a doubt, these are my favorite boots."

Previous Article
Duran Duran Paper Gods
Next Article
Lunch with … Nick Rhodes: “I Started Life as a Window Dresser – and I Never Changed”
News
Back to all news