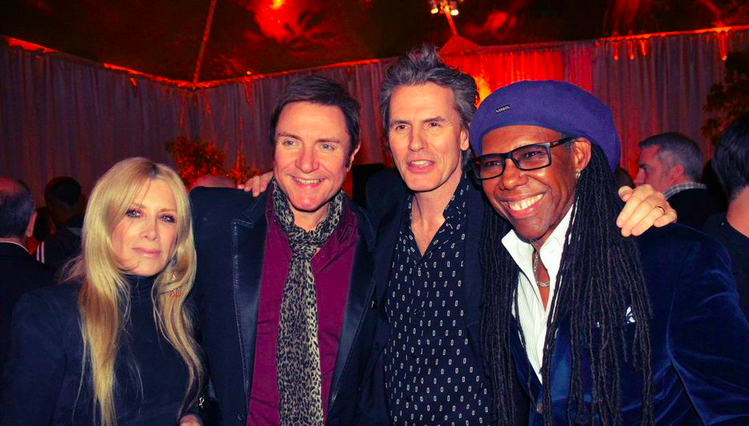 Two members of Duran Duran shared the love for musician and longtime collaborator Nile Rodgers at pre-Grammy festivities honoring the Chic star and producer, according to a post on the British band's official Facebook page Feb. 8.

Also on hand for the events preceding music's biggest awards ceremony were fellow Duran Duran producer Mark Ronson who, much like Rodgers with Daft Punk's "Get Lucky," has scored a huge hit with "Uptown Funk" featuring Bruno Mars. Both Rodgers and Ronson's names are attached to the forthcoming Duran album, due out this year.

Ronson and Rodgers were photographed together at the Pre-Grammy Gala and Salute to Industry Icons on Feb. 7 at The Beverly Hilton Hotel in Beverly Hills, Calif. Earlier, Rodgers was spotted with singer Le Bon and bassist Taylor.

The honors kept pouring in, as Rodgers also was the recipient of the Vanguard Award from the MOJAMOJA Innovation Fund. In addition to his recent work with Duran and Daft Punk, Rodgers is readying a new Chic album for release this year.

Rodgers has produced Duran Duran numerous times through the years, including hit songs "The Reflex"and "Wild Boys" and on the albums "Notorious" and "Astronaut." Ronson produced Duran's 2011 album "All You Need Is Now."