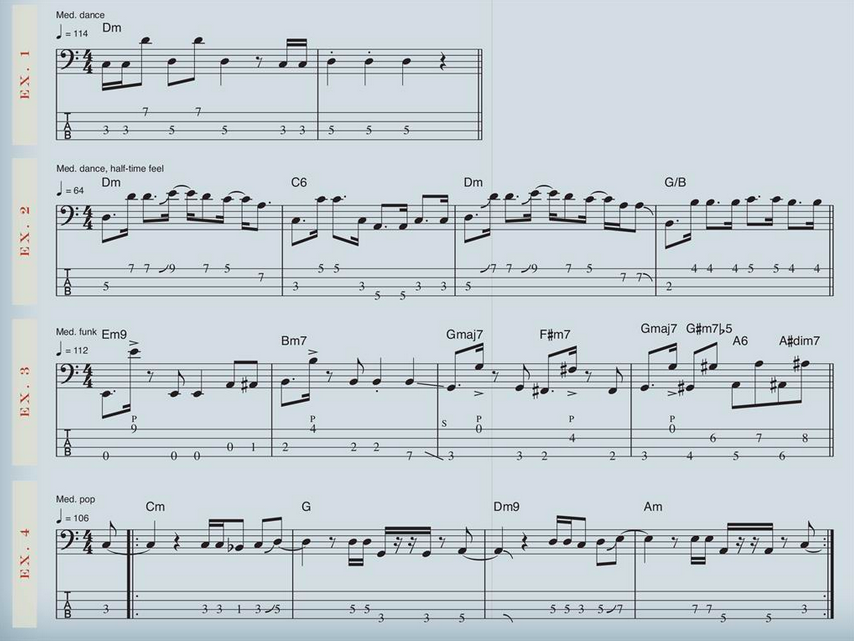 Three-and-a-half decades after john taylor’s energetic bass lines made Duran Duran household names and MTV stars, the natives of Birmingham, England are still crankin’ out the goods. Their latest album, Paper Gods—brought to life with help from the legendary Nile Rodgers, contemporary hitmaker Mark Ronson, and acclaimed producer Mr. Hudson—is sprinkled with cameos from stars like Lindsay Lohan, John Frusciante, and Janelle Monáe. And although the sound of ’80s classics such as “Rio” and “Hungry Like the Wolf ” seems all the rage in these nostalgic times, the pop outfit (whose mainstay members also include drummer Roger Taylor, keyboardist Nick Rhodes, and frontman Simon Le Bon) has updated its slick, stylish sound for today’s ears. Paper Gods, which carries a distinct EDM vibe that’s heavy on programming and production, places the band firmly in the 21st century.

For his part, Taylor made it his mission to keep his Peavey, Aria, Sei, and Fender 4- and 5-strings in the fold for that signature “JT sound.” Fans of the punchy midrange that has been Taylor’s calling card with Duran Duran, Power Station, and Neurotic Outsiders will find much to enjoy on tracks like “Pressure Off,” “Only in Dreams,” and the title track. In keeping with the band’s overall vision, however, Taylor also spent plenty of time on a Moog Voyager synth, adding depth and width to his lean, muscular lines.

Taylor, 55, keeps things fresh by exploring new tones and testing his ability to pull off his old tricks onstage. His most impressive feat, however, might be remaining relevant in an industry that changes idols more frequently than most players change bass strings.

How do you feel about keyboard bass?

My mentality is to keep my “enemies” close: We should understand technology and why it’s being used. If synth bass is required, do it yourself, and you’ll never be obsolete. The bottom line is that people always need bass; we all might have to go from being bass players to being bass experts.

Do you think synth and programmed bass have taken over pop music?

Absolutely. When you look at the iTunes Top Ten, there’s no electric bass whatsoever. The kids are listening to music that is all electronic, and everything is moved out of the range of a regular bass guitar. Many times during the sessions, I just wanted to play electric bass, but I also wanted the new album to be contemporary.

What inspired you to double your lines with a synth?

Quite often, I’d have an old-school bass thing going, and then we’d go back to thicken it up. On “Paper Gods,” for instance, I had a bass guitar line, but I felt that I needed to go down into a lower register. With “Last Night in the City,” we went with an EDM-type of thing, and I ended up replacing my bass guitar parts entirely.

Do your synth lines overlap with Nick Rhodes’ parts?

We can step on each other’s toes if we’re not careful, so Nick and I confer on the keyboard side of things. As a bass player, I don’t always want keyboard coming into my territory; if he moves down too low, I’ll tell him to stop. It has to be very collaborative for it to work. He likes it when I play synth bass, and I do, too.

Were you tempted to use only synth bass on this album?

I knew I wanted big sounds, but I wouldn’t give up my musical identity, which is the bass guitar. When we started this process, “Get Lucky” by Daft Punk and “Uptown Funk” by Mark [Ronson] were the two biggest songs out there, and they both had real electric bass on them. So I thought, screw this— if you’re going to score a big song like that, it has to have electric bass on it. So I knew that on the biggest songs on the album, I would have to get my signature sound the way I always have.

How would you describe the “JT sound”?

Not too bright, with a full low end. I like reggae tone, but I need a lot of clarity, too. And it can’t take up too much room because there’s a lot going on in the Duran Duran sound.

What gear helps you get your sound?

My Peavey Cirrus through the Peavey Pro 500 head has a narrow, tight bandwidth that sits between the guitars, drums, and keyboards. I’ve tried Gibson and Gretsch basses with Ampeg heads, and it’s just too big of a sound for my playing. The Cirrus is like my comfy pair of shoes—when I’m under a little pressure, I always go back to that.

Which other basses did you use on this album?

Our engineer loved the sound of my Aria SB1000 from the early ’80s, so I used that for a lot of things. I also used a ’70s Fender Precision. I had a London company called Sei Basses make me 4- and 5-strings that I used here and there; they have a muscular tone with fantastic dynamic range.

How important is your tone during the writing process?

I try not to get hung up on the sounds when I’m writing my lines. In the studio, I had my bass running through lots of plug-ins, and as I worked on my parts, the producers would be playing with the sounds in the control room. It’s easy to get stuck in your own style, but you have to push it forward.

How do you choose the best part and sound for each song?

I have to find the line that best expresses my feelings. There’s a song called “Face for Today,” for example, that had a classic JT sound and a great line that I felt good about. Then we started asking questions about the sonic atmosphere, and we cut up the bass line and changed it altogether.

How did Nile Rodgers help shape your approach?

When you’re working with Nile Rodgers, everybody raises their game. It’s like there’s royalty in the house: Every engineer is on point, we’re playing our best, and the guy whose job it is to make coffee is going to make the best pot he’s made in months. It’s just the effect that Nile has on people. And Nile doesn’t make judgments about my bass sound; he is so enthusiastic about me doing what I do.

What are your favorite lines on the record?

I love playing “Paper Gods” because it’s a good mix of electronic and electric bass, and it’s a fun song to play. “Pressure Off” is also a standout for me because it’s all about feel. I spent three days writing it while sitting just inches away from Nile, and by the end of my session, my fingers were in shreds. In the end, it really raised my game, and it made me promise myself I would keep my chops up.

Do you avoid writing lines you might not be able to pull off onstage?

There’s always a way to replicate things live. You might just have to explore some possibilities to find it.

Did you ever formally study bass?

I’ve never been one to study scales or be very disciplined—I was fortunate when I was young, because I made a lot out of not a lot. I developed a style that worked, but I was never much more than a punk rocker who got into funk.

Who inspired you to begin playing?

Bernard Edwards was the first guy who made me want to play bass. Right around that time, I was also listening to George Murray with David Bowie’s band. James Jamerson and Paul McCartney, of course, were huge influences on my playing.

Have you ever tried to change your style?

I went through a period when I felt like I needed to calm down and be less obtrusive, and I followed that idea until the bass became almost invisible. But I learned that you really have to claim your own personal style. I need to be able to do what I was doing in 1981, but I also need to be open to other things. The tendency is that when you get older, you get a little lazy and look for shortcuts, so I make sure I keep exploring.

We play “Rio” every time we walk out onstage, so it’s on my mind often. It takes a lot of energy, and it’s a long song with a very busy bass line. Usually, before we start playing that song, Roger and I look at each other, like, “Good luck, buddy—I hope we make it. I’ll see you on the other end.”

Would you ever consider slowing it down?

We talked about relaxing the tempo, but that’s not what the people want to hear, and that doesn’t honor the song. You have to force yourself to keep doing difficult stuff. It keeps it exciting and dangerous.

Your bass parts are so integral to the songs.

I’ve never liked bands where the bass just sits behind everything. Lots of famous players are entirely uninteresting to me because their bass parts lack musical imagination. I know that not everyone is a James Jamerson, but you have to make the music move—and nothing does that more than bass.

Any words of advice?

Keep playing! It seems like the simplest thing, but just don’t ever stop playing. There’s no reason you can’t be a better bass player next year than you were this year, no matter how old you are.

John Taylor pores over bass guitars, keyboards, effects, tones, and registers in pursuit of the perfect parts on Paper Gods. Example 1 shows the basic groove figure of the title track, for which Taylor’s trademark, barking bass guitar tone is present. Practice making a smooth leap on the figure in beat one. Example 2 summons the bridge of “Sunset Garage,” at 2:53. Following a bass-and-keyboard- bass-doubled verse and chorus, Taylor’s bass steps forward to add melodicism—dig his flirtation with the sus4 (C) in the last measure. In Ex. 3, bass, octaver, and keyboard bass all converge on “Only in Dreams.” Here, in the verse at 2:08, Taylor plucks the low notes but pops the accented notes, adding to the funk core. Finally, Ex. 4—from “The Universe Alone,” at 1:30—is all synth bass, as Taylor adds eighth-note pushes and 5ths on the downbeat to color the subhooky part.