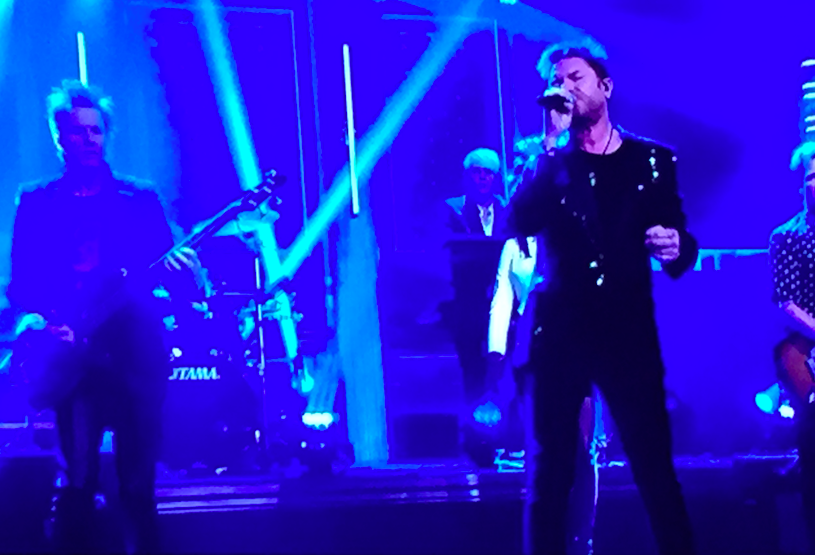 Album of the year - Mark Ronson’s “Uptown Special,” it’s just a great record. “Uptown Funk” was an amazing lead single, and I still hear the song 6 or 7 times a week.

Mark went to make his record half way through working on our record so we sort of saw his progress. He really wanted to make the ‘right’ record and he has. The grooves and melody - it has it all for me.

Movie of the year – “Amy” (Amy Winehouse). I was in New York, without a lot to do, and Davy and I decided to go to the movies. “Amy” was just an incredible film, so intense. I think as an artist, having touched on some of the same issues with regard to fame, it blew me away. The music was amazing as well.

Moment of the year - Playing the O2 in London - I wasn’t expecting it, but it was just one of those nights that everything fell in to place. The music sounded great, we all had a lot of family and friends there, and the audience was incredible. We felt all the work we had done to get there made sense on that night.

At one point, I looked in to the audience and saw my son Julian and was able to wave to him, and that’s so unusual for me to see anyone out in the audience, so that was also a special moment. I loved Red Rocks and Hollywood Bowl too, both amazing nights as well.

Sum up 2015 in one word - The word that comes to mind is “Satisfaction.” It was a satisfying year, our project came to fruition with a lot of positive vibes. We were able to translate “Paper Gods” to a live arena, and that was also very satisfying (because I was a little worried about how that would turn out!).

Thoughts for 2016 - We have a great live show, and we can’t wait for people to see it. On the UK tour we worked it all out, and it all looks great, from the lighting to the screen content, and now we’re playing the new songs better and more confidently. We have a great show to take around the world and I’m excited.

Thanks to everyone for waiting – we must have the most patient fans in the world – and then to come out to see us live in such large numbers, it has been terrific. Happy holidays to you all, we will see you next year!

Album of the year – Julia Holter, “Have You in my Wilderness.” I love her voice, I love the songs on the album. I don’t know that there is anything else that came out this year that I love quite as much. I also liked Bjork’s new album, Beachhouse, Kendrick Lamar… The Weeknd’s “Can’t Feel My Face” was the single of the year, it was just everywhere.

Movie of the year – “Mad Max Fury Road.” I vaguely remember the first one, but I couldn’t compare the two films. This was so modern and so interestingly done. I also liked “Clouds of Sils Maria.”

Television show of the year – I just binged on four seasons of “Scandal.” I do love Kerry Washington. Also, “Saturday Night Live” has been pretty great this year; there is so much material for comedy out there with all the political stuff happening.

Book of the year - I liked Jonathan Franzen’s “Purity,” but then I went back and read his book “Freedom,” which was the book I enjoyed the most this year.

Sum up 2015 in one word - “Complexity” on every level – personally and globally – nothing is black and white, there are no hard and fast answers. It feels like there are a lot of gray areas these days.

Thoughts for 2016 - We have set a touring agenda that will occupy 3 or 4 months of the year so far. I want to get through it peacefully, in the way we got through the tour in 2015. I want everyone to stay healthy and I want all the shows to be great. I feel like we’re in a strong position, but we’re also still growing. I don’t know what the year will bring, but I know there will be opportunities. I just feel so lucky that we do what we do.

Album of the year - "Paper Gods” - It is a splendid album. However, if I cannot choose my own, I will say I am very fond of Maarja Nuut and really liked Tame Impala’s “Currents.”

Movie of the year - “Whiplash," which was last year, but it was this year for me. I actually just watched it again and really loved it. I really want to see the new "Star Wars.”

Book of the year - Without question, it was the "A Brief History of Seven Killings" by Marlon James. It was extraordinary, amazing! I did the audio book, which was read by seven different actors, and it was superb.

Television show of the year - I loved the first “True Detective,” which I know was not this year, but I watched it this year so it counts. I LOVED it even if Matthew McConaughey mumbles too much for my liking. “Broadchurch” is very good. I am also enjoying Season 2 of “Fargo.”

Moment(s) of the year - Walking on the stage at Red Rocks. It was an amazing place - it felt like some ancient alien culture had just left their space ship there. We had some very notable moments this year: the US Ambassador’s house in London over July 4th, the FOLD Festival with Janelle, Nile performing with us at the Hollywood Bowl, Lindsay at the O2. It has been an incredible year and I think 2016 is going to be the same.

Thoughts for 2016 –I would like a little bit more world stability in 2016. I want to express our sympathy and empathy with Eagles of Death Metal and all music lovers who had their bubble popped that night at the Bataclan Theatre, and of course, the families of all the people killed that night. Duran Duran, Eagles of Death Metal and Sony ATV are donating all the funds generated from the sale of EODM’s version of “Save a Prayer” to a fund that will promote tolerance and peace through music. I think the world can use that.

I wish all Duran fans a happy holiday, have a great time, look after each other, spread the love, that's what it is all about. Tell someone you love them, it's a wonderful thing. Make someone happy, make yourself happy. Whooosh

Album of the year - The most popular album with all of Duran Duran was the Tame Impala album, “Currents.” I think most of the albums I like have a ‘mood’ to them, “Transformer” by Lou Reed or “Station to Station” by Bowie…everyone of them have a consistent vibe through out. I also heard a track today by Caribou - a cool, inventive dance song - and I remember how much I liked them. I also liked Lana Del Rey’s “Honeymoon” album.

Exhibit of the year - What was particularly wonderful was the Alexander McQueen show here at the V&A in London. It was spectacular looking at the amount of work he produced in a relatively short life span. It gave you a sense of how creative and inventive he was. He was second to none among designers of the 21st Century. The Exhibit was a moment of true beauty.

My highlights of the year - It is always a highlight when we put out an album but something special we got to do was present Giorgio Moroder an award at GQ Man of the Year Awards. He changed music like very few people have. He was so charming, so filled with energy, so grateful for his career. It was an enormous pleasure to see him be honoured the way he should be. He has been so influential and inspirational to me

Outside of Duran-world, something that was a big highlight for me was visiting Cuba. It is much more than i would have ever imagined. It has old school grandeur, decayed beauty, incredible 1950s candy colored cars driving around, a beach, a forest, tiny villages, music, rhythm, the Tropicana - which was one of the first big shows with dancers and a beautiful, unique culture.

Moment of the year - So many - the release of “Paper Gods” was a triumph after two years, signing to Warners was the right thing for us, and they have been a dream so far. They’re a proper label with old school values and new school smarts. Another big moment was holding the vinyl of our albumand seeing the spot varnish [a personal highlight for me!].

The tour has been great everywhere we have played. We got to perform at the Hollywood Bowl for the first time, and it was a great night. Playing with Nile & Chic was a joy. Hence - we’re coming back next year in America. The British tour was our favorite British tour of our career…this production that we have works really well and a we have a fantastic team, so we’re all feeling really good about that.

Sum up 2015 in one word - "Tumultuous." It is a lot of things. It has been fantastic, busy but also sad …our friends, that we had recently just made when we performed with them on “TFI Friday,” Eagles of Death Metal, were involved in this heartbreaking tragedy. In life you have moments of great joy and then you’re brought back down by incidents that make everything else so trivial. The only good thing to come out of the at all is we have created a fund where all the proceeds - 100% - from EODM's cover of “Save a Prayer” will be going there to help promote tolerance and peace.

Next year we’re playing some concerts, and we’re all looking forward to that. I am going to start the year off the year going back in to the Studio with the Bloom Twins. I really believe in their creativity, their ability as an artist and it’s an inspiration to work with people like that and help them develop a direction….John and I may take look at our musical and get it in to shape. Oh - and my photo book is going to come out in 2016!

Happy Holidays to everyone - thank you once again for all of your support because that’s why we’re still here, and we mean that. We will see you next year….