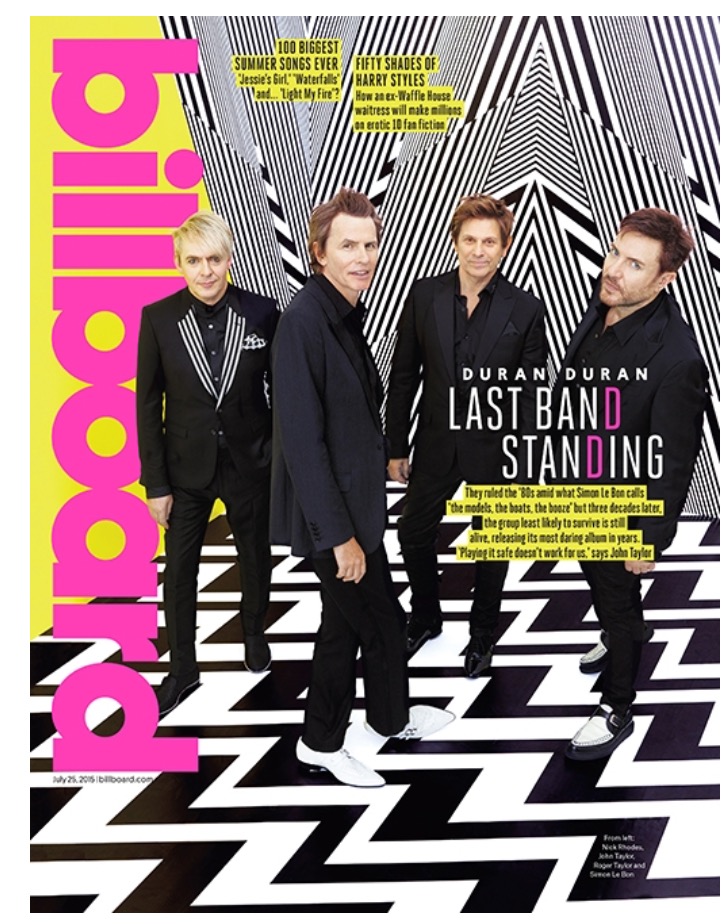 With their slick hooks, suggestive videos and unabashed love of fashion, Duran Duran took MTV, radio and the world by storm in the '80s. Even in that pre-Internet troll era, haters piled on the British pop act, calling them a flash-in-the-pan band with too much eyeliner.

Well, it's been 34 years since the release of their self-titled debut. And minus a little makeup, the boys are still around -- and making new music.

How has Duran Duran managed to flourish without coasting by on mere nostalgia? In Billboard's latest cover story, out Friday, July 17, the band talks about making new music to compete with their old stuff, working with Mark Ronson, and showing the world they're more than just pretty faces (even while they maintain those good looks).

They Stay Current Without Sacrificing Their Sound
Duran Duran's latest album, Paper Gods, is co-produced by "Uptown Funk!" hitmaker Mark Ronson and features a spoken word section from Lindsay Lohan. "We wanted something like Vincent Price on Michael Jackson’s Thriller, but with more of a sexy girl vibe," says keyboardist Nick Rhodes.

They Realize They're Competing Against Their Own Legacy
"There are many artists I’m fond of who will put out a new record, but when I hear it, all I really want to do is listen to their old records," admits bassist John Taylor. "That’s what we’re up against.”

Never Go Out of Style
Even if they're no longer on the forefront of pop fashion, Duran Duran refuses to grow slovenly. During a Billboard cover shoot, lead singer Simon Le Bon paid attention to how the sun fell on his face, Taylor remains slender, and Rhodes refers to blue jeans as "woefully pedestrian."

Hard Work Was Behind All the Partying
Le Bon scoffs at people who referred to them as "shallow" in the '80s. "It was fun hanging out with Princess Margaret, Prince Charles and Diana and Warhol, too," he says. "But that’s all the press ever talked about: the parties, the models, the boats, the booze. But we did work hard.”

They've Never Lost Their Confidence
“We want to make music that stands up in this world,” says Le Bon. “When I walk out onstage, I want to think, ‘We’re f---ing cool, actually -- we’re not bad at all.'"

Previous Article
Duran Duran Singer Simon Le Bon Has “Great Sympathy” for One Direction—Find Out Why!
Next Article
Fan Community Q&A Excerpt with Suzi Digby
News
Back to all news