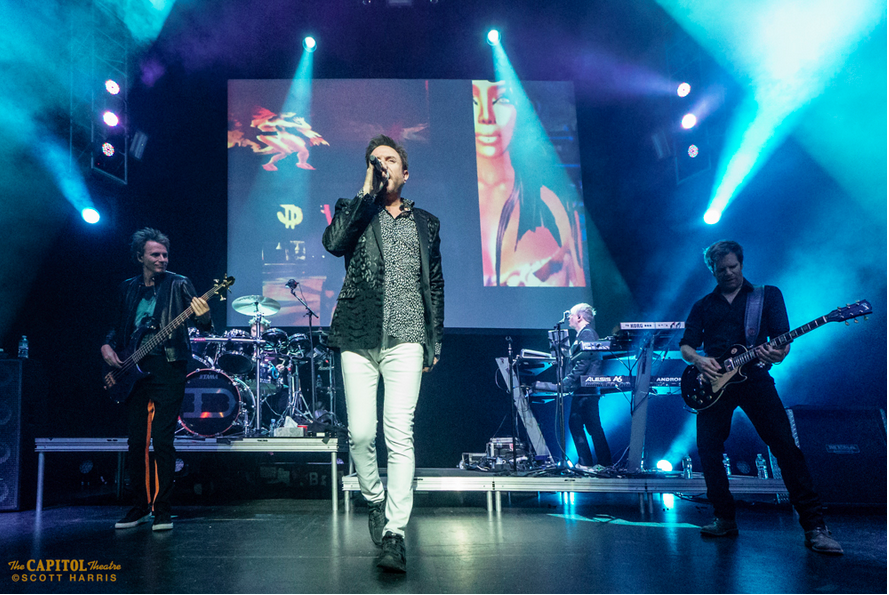 Most bands make you wait for a string of greatest hits to be played. Not Duran Duran. At The Capitol Theatre on Aug. 1 – the first of two nights in Port Chester – the iconic new wavers came out swinging like Ronda Rousey with a one-two punch of mega-fantastic hits “Wild Boys” and “A View to a Kill” followed by the tandem of “Hungry Like the Wolf” and “Come Undone.” In a 17-song-set, the band, who are now in their fourth decade of pop stardom, never let up and the fans – ranging in age from children of the ‘80s to teens– danced and sang along all night long to additional hits like “Notorious,” “Ordinary World,” and a surprise cut of side project Arcadia’s “Election Day” plus classic deep cuts like “The Chauffeur” and “Careless Memories.”

Whatever Simon LeBon is drinking, I want some. The 56-year-old frontman looked as fit and youthful as ever, sexily moving across the stage and teasing the hungry crowd to throw their hands up. The other band members, who have been there from the beginning – give or take a detour or two, seemed just as spry with John Taylor rocking the bass, the always-too-cool-for-school Nick Rhodes playing the keys, and Roger Taylor getting it on and banging a..drum (that’s a Power Station reference by the way).

This fall, Duran Duran will release their 14th studio album entitled Paper Gods, and while they only played one song off of it – “Pressure Off” –the initial takeaway was it fit right in with the Birmingham’s trademark sound. If there was a flaw at all to the night it was the band taking over 20 minutes to get back for an encore, and it would’ve been cool if they played some more from their arsenal of hits. That aside, it was an awesome night of great music and instant nostalgia. Quickly, I’ll add while their old stuff magically transports you to the 1980s and 1990s, this band has never seemed like a novelty. They’ve remained relevant all these years by expanding their sound, and collaborating with contemporary giants ranging from Justin Timberlake to Mark Ronson. (Janelle Monae is just one artist on the upcoming album by the way.) To paraphrase what LeBon said during the opening of the Cap show: “Duran Duran are cool again…I never thought we weren’t cool.” He’s right.