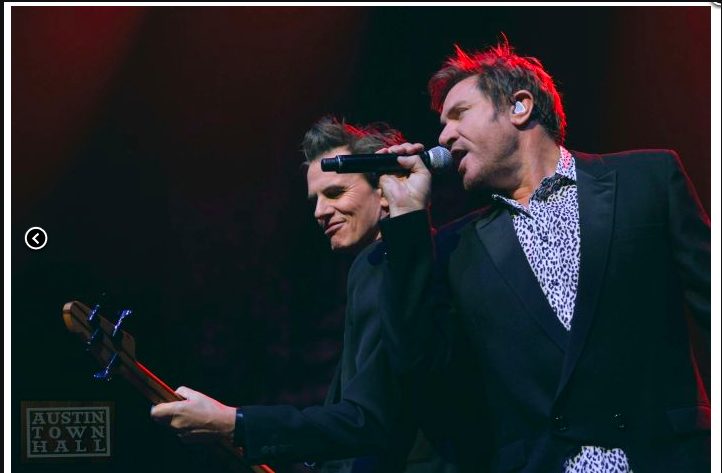 It was Formula One weekend in Austin. If you are oblivious, F1 is the biggest thing to hit Austin from a worldwide awareness perspective, ever. People from everywhere know that Austin is Live Music Capital of the World and has the best BBQ, period.

One other thing F1 brings is a few added festival type events, we’ll get into Fan Fest in a later post, but a special event like Duran Duran at ACL Live? I gotta go. I have proclaimed my love of DD before when they came for SxSW a few years back. They have influenced so many of the current crop of indie/pop/dance acts out there, no doubt. Throw in getting to see local boys Knifight open was an added treat.

Click through for pics and more thoughts on the evening from me and +1.

These tickets weren’t cheap. The five bills for floor seats included complimentary drinks and elegant snacks. It was also limited to just 600 people so everyone had elbow room to get their groove on. Definitely an A-List scene. I think I saw famous people.

When I saw that Knifight was opening, I thought one thing; I hope they don’t dial it back. I wanted the abrasive tones and beautifully crafted anger tinged by Sisters of Mercy and Skinny Puppy while still busting dance beats. I got it. The audience got it. Half of which seemed to love their sound, the other half not so much. But at least they had a reaction, something far better than a DJ or cover band. I didn’t get to take photos of the band, but know they made us proud in front of the crowd that had plenty of pinky-raisers and out-of-towners.

Duran Duran are pros. This was an in-between album set that was hit heavy, only a few form the most recent record and running the gamut from “Planet Earth” to “Sunrise”. “Ordinary World” was dedicated to two F1 drivers fighting brain injuries, Michael Schumacher from a skiing accident and Jules Bianchi from a horrifying accident during a race a few weeks back. About the only song missing was “Chauffer” which was amazing during their set at SxSW. It was an expensive ticket, but I think everyone got their money’s worth in hits.

+1 was thrilled with this set. Here are her thoughts:

The band has aged well – aesthetically and musically. Simon looks great, John is as handsome as he was when I had a picture of him on my trapper-keeper in 1984, and Nick is as androgynously striking as ever. Roger is still Roger. Musically, the tunes hold up aside from the telltale 1980’s sax solos. “Hungry Like the Wolf”, “The Reflex”, and “Notorious” were standouts, as was “Save a Prayer” a few songs later. I was a bit sad about the omission of “The Chauffeur” from the setlist, and I thought the decision to start the show with A View to a Kill was a subdued, odd choice. All said, I danced my inner 14 year old girl’s butt off way up in my photo +1 seats in the balcony.

Simon still exudes front man appeal and hits the notes. The ladies in the audience still lose their shit. Surprisingly, the crowd had its pockets of younger fans and not just those dragged to the venue by moms.

Finally, thanks to Circuit of the Americas for stepping up their game to make F1 an event and not just a race. #austinistexanforfestival