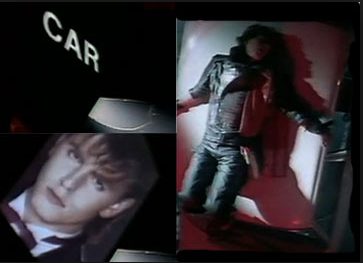 Chances are, if you turned on MTV in the early 1980s, you watched dozens of videos directed by Russell Mulcahy. He's the Australian visionary that brought the world more than 80 videos in all, including most of Duran Duran's classic early clips, plus memorable shorts for the likes of Kim Carnes, Billy Joel, Bonnie Tyler, Fleetwood Mac and many more.

"Russell really got us," says Duran Duran's John Taylor, "and we really got him. There was a tremendous kind of mutual addiction that took place. We just kind of glommed onto each other."

Mulcahy lensed more than 10 videos for Duran Duran, including "Hungry Like the Wolf," "Rio," "The Reflex" and "The Wild Boys."

Mulcahy also famously directed the very first video played on MTV back in 1981: The Buggles' "Video Killed the Radio Star." He later won an MTV Video Vanguard Award at the 1985 Video Music Awards (presented to him by Duran Duran's Andy Taylor and John Taylor). Mulcahy's music video output slowed in the late 1980s and eventually stopped in the mid-1990s, as he turned his focus to directing features (including the cult classic Highlander).

Below, Mulcahy and John Taylor remember some of their classic early music videos, including a few of their numerous collaborations.

"We shot that video in a day," Mulcahy says. "It was a good song… but no one knew what it all meant and what was going to happen." What was going to happen was that video would kick off a new medium of "visual communication," as Mulcahy puts it, thanks to MTV. "Video Killed the Radio Star" was the first clip aired on the network, shortly after it went live at 12:01 a.m. ET on Aug. 1, 1981.

"I think that 'Planet Earth' was the introduction to the medium [of music video]," Taylor says. "I remember watching some of the painted glass [matte painting] shots and us really being wowed by what was being done. They were little tricks. It was like going to the Lumiere brothers. It was like 'Wow! We had no idea this shit could be done!' It was a one-day shoot, 'Planet Earth.' You know, it was a very exciting day, and by the end of it, we were sold on the medium."

Carnes' haunting single was a smash hit in 1981, spending nine weeks atop the Billboard Hot 100 chart -- marking the singer's only No. 1. The song's visibility was raised greatly by its atmospheric video, with elaborately costumed dancers and a modified slapping dance move. The video opens -- quite dramatically -- with Carnes sheathed in black billowy fabric, hidden from view.

"The first shot we did," Mulcahy recalls, "I had her lying on a black box… and I had a black drape, silk thing over her face [and] head with the wind machine on. And the record company walked in and went …'What the f---?' They didn't quite understand that it was going to come off."

As for the famous slapping in the video? That came to Mulcahy in a vision.

"Usually when I listened [to a song preparing for a video], I didn't necessarily listen to the lyrics so much. I didn't want to become that literal when I made the videos. … I would put the cassette on -- yes, believe it or not, a cassette! -- and close my eyes and let images just hit me. Whether they made sense or not, it didn't really matter. It's how images came to me. I remember the idea of the slapping, because I felt like there was a lot of that in Bette Davis films, so I just stylized that."

"We didn't work with [Mulcahy] again for a year [after 'Planet Earth']," recalls Taylor. "We went back and did 'My Own Way,' which was not a terribly successful song, but the video, it was like 'Planet Earth' part two. It was all about style, it was all about color. And, you know, what could be done on a soundstage in a day."

The big-budget video features a shot of the band's Stevie Nicks dancing on the edge of a cliff, created using a matte painting. A matte painting is where an artist paints a background on glass, and then the camera films action through the glass, creating the illusion that the actors are part of the painted background.

However, Mulcahy says "someone forgot to bring the piece of glass" for the shoot, which he recalls took place at the former A&M Studios (now the Henson Soundstage) in Hollywood. "So … someone took a window pane out of a makeup room and we painted on that, and put the window back, with the painting still on it. I'm not sure whether the paint is still on it [today]. But if it is, I should get it onto eBay."

Billy Joel had told Mulcahy that he wasn't very comfortable acting in videos, unless he was doing something familiar -- like sitting behind a piano. So for "Allentown," Mulcahy says Joel was cast as an Arlo Guthrie-like troubadour, singing the song's story while the cast acted around him. Said story also notably included a number of beefy men portraying steel workers -- a few of whom are seen partially nude in a shower scene.

"We actually showed butt cracks," Mulcahy says. "I had to pay [an actor] $500 extra to show his butt crack."

Joel remarked in 2011 that it only recently had dawned on him that the video's content was particularly racy. He thought at the time of the video's production, Mulcahy's stylistic choices were appropriate, considering the video's storyline.

"[Billy] felt real [in the video]," Mulcahy says. "He felt very comfortable. And I think he felt so comfortable he probably didn't notice all of the guys with muscles…pumping iron around him. [Laughs] The story's about workers, and [those] workers just happened to be young and muscular."

Taylor remembers how Duran Duran's then-manager, Paul Berrow, had a vision of what the band's videos could become during a meeting with MTV executives: "'Listen, you know, if we could have anything, we'd have videos that look like James Bond films.' And who better to interpret that [than] Russell, who always thought like a feature film director? He always had the vision of a feature film director. We had equal measure of grandiosity. But you know what, it was [the] right time, at the time. The videos that we made in Sri Lanka ['Lonely in Your Nightmare,' 'Hungry Like the Wolf' and 'Save a Prayer'] were game-changers. We know that."

Following the exotic location shoots of Duran Duran's previous videos (Taylor says, "It was something that was getting out of control"), the band purposely took a step back for their next clip, "Is There Something I Should Know?" The video was shot on a soundstage with the band in matching uniform-like outfits.

"'Is There Something I Should Know?' was like, 'Think like The Beatles,'" Taylor says. "It was a very conscious decision to put us in uniform, to not have to…come up with an anti-image for that song."

"We shot it all in one long night," Mulcahy says. "And about 3 o'clock in the morning, [Tyler] came up. I think we were shooting some of the boys…in slow motion, and their shirts being blown open. [Laughs] There's a few of those sort of images. And [Tyler's] in the corner, and I'll never forget, in her Welsh accent, she turned to me, and she said '…You are nothing but a prevert (sic).' And basically stormed off for a couple of hours."

"It wasn't meant to be perverted. There was meant to be a certain sexual charge to the video, so to speak. In a dreamlike fashion." (Despite Tyler's displeasure, Mulcahy's vision wasn't compromised. He says no cuts were made to the video.)

Tyler had done "most of her work" on the shoot at that point and soon left the set. Mulcahy said they didn't speak again until it was time to shoot a video for her next single. "She rang and said would I do her [next] video. And I said, 'Of course not.' I mean, you know, she's a lovely lady, and I wish her the best, but it was quite an amusing moment at 3 o'clock in the morning."

Mulcahy filmed this video -- for the band's first No. 1 Hot 100 single -- mostly at a Duran Duran concert in Toronto, Canada, on March 5, 1984. Mulcahy arrived a couple nights before the shoot, aiming to the see band play at another show.

"I'm on the way to the [show] and I see a sign -- I've never been up there before -- and I see a sign saying 'Niagara Falls.' … And I go 'Oh my God, Niagara Falls!'" Mulcahy was enticed by the promise of seeing the famed waterfall in the chilly winter time. "I sort of turned left and didn't go to the concert and went to Niagara Falls instead."

"It was a dreadful thing to do and very unprofessional. However, what resulted, when you watch the video, there's a sequence in the video where they're all looking at the gigantic video screen, and you'll see this gigantic white liquid sort of pouring out of the screen. Which was totally, totally inspired by Niagara Falls. … And so if I hadn't done that U-turn and gone to Niagara Falls, that image wouldn't have been in the video."

Taylor says "The Wild Boys" was "conceived as a cinematic response" to the William S. Burroughs post-apocalyptic book of the same name, and "was grandiose in the most extreme form." According to Mulcahy, the big-budget video (around $1 million) was filmed over 10 days on a wall-to-wall "gigantic set" at Shepperton Studios in England. "That was quite an experience."

"Up until that point," Taylor says, "[It] was probably the most outlandishly conceptual of all videos… I look back on it and I think it was the greatest video we ever made."

"Russell had been developing [a feature] -- he'd optioned the book -- and we'd said, 'Well, when you make it, we'll write the song.' He was in development, it fell through, the song was written, and all of those fantastic ideas that had been developed for the film we got to use in a video.