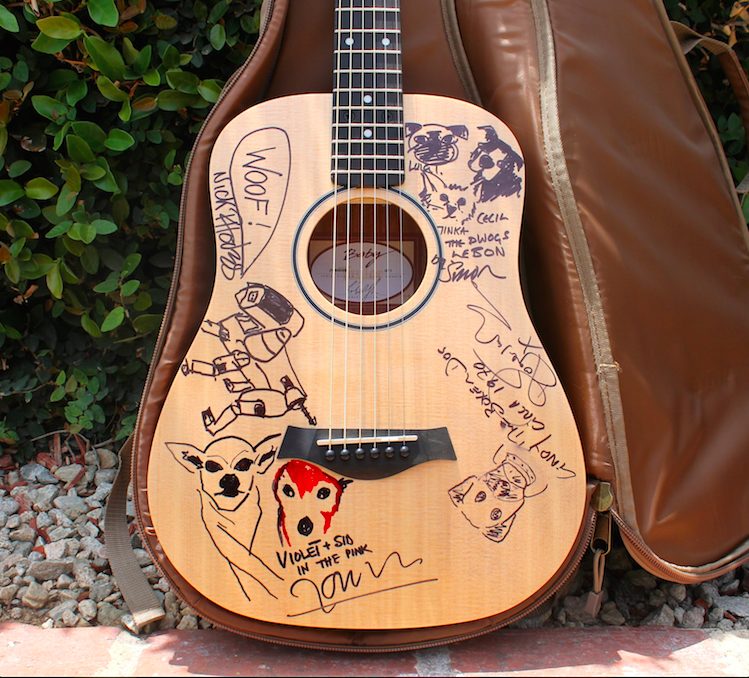 This amazing piece of memorabilia was donated for auction to help Jimi's Angels Dog Rescue continue to save lives by contributing to the medical needs of discarded dogs.

Bark n' Bitches retail & Jimi’s Angels Rescue is dedicated to rescuing homeless and abandoned animals, primarily dogs from high-kill shelters, the city streets and owners who can no longer care for them. These high kill shelters are in Los Angeles, Riverside and San Bernardino counties where the euthanasia rate can be as high as 85%. Many were never taken to the shelter by their owners… they were picked up on the streets as strays by the shelter system. Sadly, many of these pups were on the list to be euthanized.

You will be bidding on a Taylor acoustic guitar lovingly signed and decorated by Duran Duran. Each band member has drawn an image of their own personal dogs to raise awareness and help to raise money for the abandoned and discarded dogs taken in by us. This guitar was signed at the studio in London where they are working on their next album and shipped to in Los Angeles for auction. You will never ever have the opportunity to own such a unique piece of memorabilia signed and created by Simon Le Bon, John Taylor, Roger Taylor and Nick Rhodes. An 8x10 black and white and an 8x10 colour photo included will provide the authenticity of this piece!

Click HERE to bid on this one of a kind item!