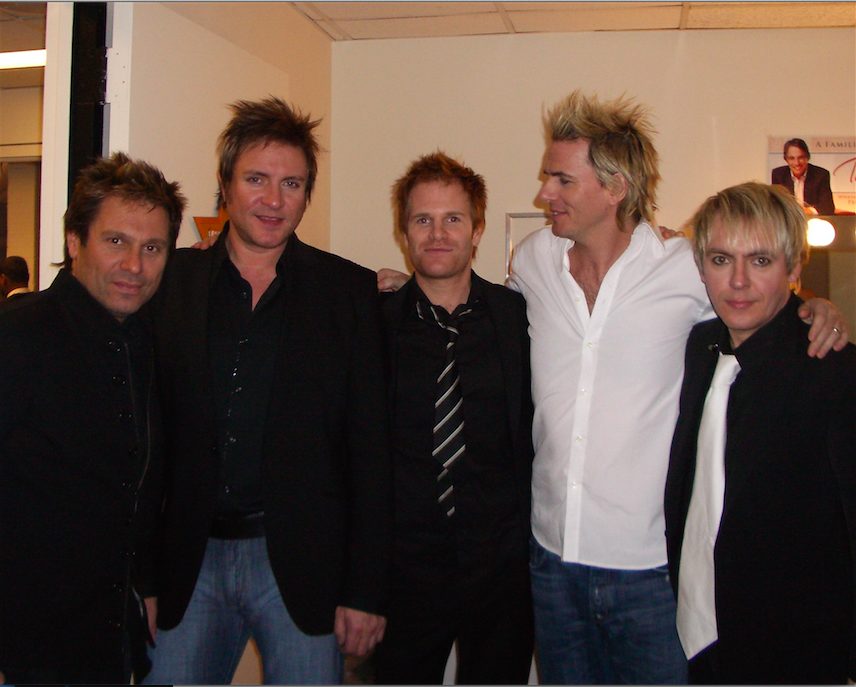 So it's exactly 10 years today since my very first show with Duran Duran... time has flown by so quickly, it seems like half that time!!

I'll never forget my first meeting, and subsequent show, with DD on 19th November 2004. I received a call, out of the blue, first thing on a Wednesday morning from Chris Rowley, who was their tour manager at the time. A friend in the business had given him my contact info.
Chris asked me if I was busy that Friday (yes only two days!) as DD's guitarist, Andy Taylor, had taken ill and would not be able to make the show. I said yes, and asked when will we be rehearsing? Chris replied "there will be no chance to rehearse as Simon and Nick are out of the country, but John and Roger are available to meet and jam with you this evening."

I'd never met any of the band before so, slightly nervously, went that evening to meet JT and RT at Sphere Studios, and immediately liked their vibe and approach. They played some CDs and asked me to pick out a few of the key lines on the spot... luckily my ears were reliable that evening and I jammed along with relative ease.

The guys gave me a pile of their CDs, with a few songs ticked on each, for me to learn before we would meet again the next day... as you can imagine there wasn't a whole lot of time for sleeping as I had about 15 songs to learn for the next afternoon.

I remember my wife Martha coming home from a concert very late that evening and the look on her face as I was blasting out the DD hits. Needless to say she knew all the words!

The next day's jamming went smoothly, and in fact, John gave me the compliment of my life - "it's like having Jeff Beck in the band"!

The next time I saw the guys was at the soundcheck where I first met Nick and Simon, who were obviously a little skeptical that this was all going to work without any rehearsing... Nick watched my back that night as a few times during the show I had to ask him to sing me the guitar intros or parts. He laughs about it still, and reminds me occasionally to this day!!

Anyway, all went well that evening, and the guys told me Andy would not be around for the next few weeks and asked if I would fill in for him. Of course I agreed and over the next couple of weeks we had promotion in Europe and the UK.

Although this gave me time to listen more to the tracks, there was no time to rehearse before the first major show on Dec 2nd 2004 at the Gwinnett Center Arena, Atlanta, Georgia, US in front of 15,000 people! I was actually not that nervous as I figured no one could really blame me if I messed up!

That show, and the rest of the shows on that trip, went well. When Andy had to take a few weeks off in March/April 2005 when his father became very ill, the guys called me asking if I could get to Denver, US for a show the next day. Once again there was no time for rehearsing, and not only that but the set had changed quite a bit so there were several new songs I had to learn from my iPod on the flight... slightly daunting but I was up for the challenge!

Again this run of Arenas went well and the guys must have been happy as they called me in 2006 and asked me if I fancied the job as full time guitarist and the rest is history....

Duran Duran is a very fun and interesting band to work with, and we have had some fantastic experiences and played at some amazing venues/festivals in beautiful countries.

Some of the highlights over these 10 years include: 2 shows at Wembley Stadium in July 2007 for the Concert for Diana and Live Earth;
playing on the Red Carpet Massacre album and seeing how the guys worked in the studio; co-writing and playing on the 2010 album All You Need Is Now and the forthcoming 2015 release. I also really enjoyed playing at the Live Opening Ceremony for 2012 Summer Olympics in Hyde Park, London back in 2012 and Coachella was great as it's somewhere I'd always fancied playing.

Am very much looking forward to the release of the new album and the subsequent tour. We are gelling more than ever now onstage and have a great rapport. A lot has happened over the last 10 years and it's been great getting to know the guys on a personal level.

Previous Article
A View to A Kill Extended Mix
Next Article
Simon Le Bon Says He Was “Flattered and Honored” to Be Chosen to Sing on “The Hunger Games — Mockingjay: Part 1” Soundtrack
News
Back to all news