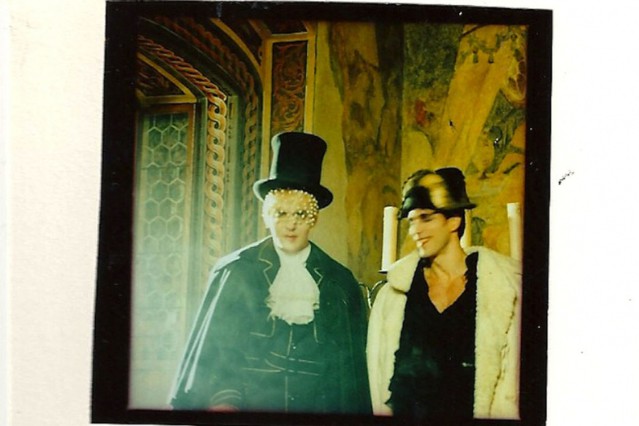 New TV Mania album: Bored With Prozac and The Internet? Out on March 11, 2013

“Music fans will be hard-pressed to find a more relevant record. “-The Huffington Post

In anticipation of the March 11 release of their TV Mania album Bored with Prozac and the Internet? via The Orchard/Beatport, Duran Duran’s keyboardist and founding member Nick Rhodes and former Duran guitarist Warren Cuccurullo premiered the MNDR remix of their new track: “Beautiful Clothes” on SPIN.com today. Fans also now have the opportunity to share what the idea of “Beautiful Clothes” means to them and win prizes through an exclusive competition with Lomography. Click HERE for the full competition details.

Beginning on March 7, Nick Rhodes will exhibit a collection of original photographic works at The Vinyl Factory Chelsea in London. The collection, entitled Bei Incubi – translated as “Beautiful Nightmares” - will feature twenty Polaroids, and more than thirty original photographs and prints that have all been taken and signed by Nick. The work was inspired by the TV Mania album, during a cover artwork photoshoot, and will be open for public viewing and sale from March 8th to April 5th. This is only the second time Nick has exhibited his work in the UK.

TV Mania was created back in the mid-'90s by Rhodes and Cuccurullo as a soundtrack to a bizarre TV cyber soap opera about a family who give away their freedom to scientists in exchange for reality TV show fame. The duo shared a vision (that now seems more like a premonition) of a society where privacy was non-existent and voyeurism was woven into the cultural fabric. In wanting to share this idea, they created an album that blended television samples with looping rhythm tracks, exploring themes of reality TV, virtual shopping, surveillance, pharmaceutical drugs, fashion, fame and faith. The song “Beautiful Clothes” describes the daughter in the family’s obsession with attaining fame at any cost. Other tracks on the album, with song titles like “Yoghurt and Fake Tan,” and “What About God?”, give insight on each of the dysfunctional family members and how they change under the gaze of the public eye.

The Vinyl Factory will release both limited Boxed and Gatefold editions of Bored With Prozac and The Internet?. In addition to the vinyl featured in the gatefold, each limited edition boxed set will also include an exclusive Polaroid photograph shot and signed by Nick Rhodes, screen printed artwork, a personally authored note by Warren Cuccurrullo, and an oversized glossy booklet, featuring exclusive imagery. The album is also available for pre-sale on iTunes now.

Nick and Warren will also visit the Duran Duran Universe in Second Life to give an exclusive preview of Bored with Prozac and the Internet? on Saturday March 2, at 1pm SL time (4 pm EST). The pair will chat with fan community members about the project at the big arena in the middle of all four islands. Visit http://secondlife.com/destination/duran-duran for more information.

Visit www.tvmaniamusic.com for the most up-to-date news on TV Mania.

Previous Article
MNDR Team With Duran Duran’s Nick Rhodes for TV Mania Remix
Next Article
Duran Duran’s Taylor on US Citizenship: ‘I Want to Vote’
News
Back to all news