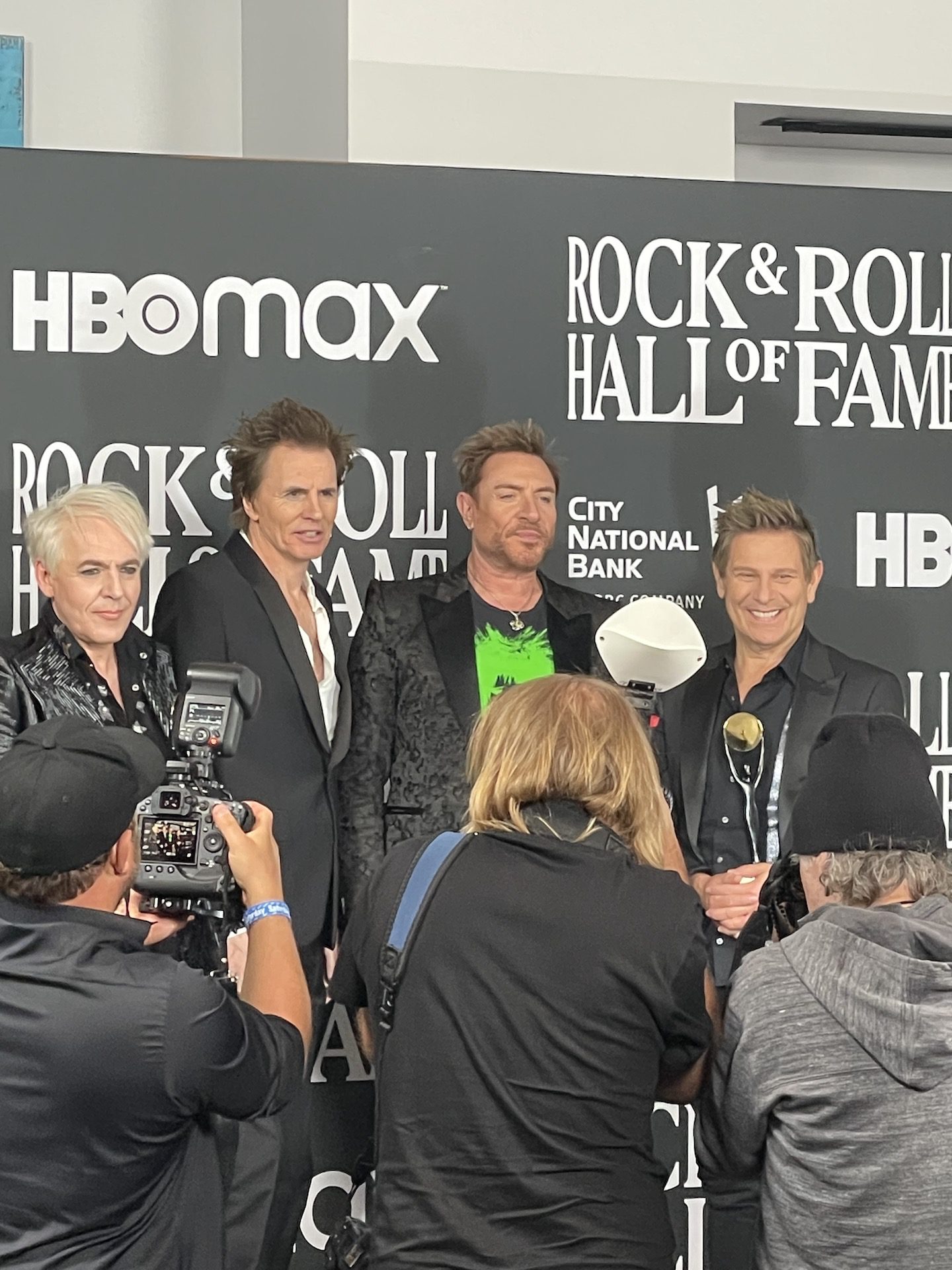 Lionel Richie summed up the theme of the 2022 Rock & Roll Hall of Fame induction ceremony, held at Los Angeles' Microsoft Theater on Saturday, when he said, “Rock & roll isn’t a color; it’s a vibe."

The tables near the stage were packed with a colorful roster of artists and executives, while the rest of the room was filled with a hugely passionate throng of fans who’d bought tickets to cheer on their idols during this milestone moment.

The show began with a stirring opening speech by Hall chief John Sykes, whose ease and charm earned a warm response from the crowd and set a vibrant tone.

“It is devastating news to find out that a colleague—that’s not even the right word—a mate, a friend, one of our family, is not going to be around for very long,” Le Bon said backstage. “It is absolutely devastating. We love Andy dearly. I am not going to stand here and cry, but that’s what I feel like.”

Le Bon gently changed the subject, but the audience soon learned Carly Simon wouldn't be accepting her award in person due to the loss of her two sisters, Joanna and Lucy, who died two weeks ago one day apart. Sara Bareilles and Olivia Rodrigo filled in for her in the performance segment, turning in strong renditions of “Nobody Does It Better” and “You’re So Vain,” respectively. The bittersweetness of the circumstances mixed with the joy provided by the music amid loss, was a reminder of the Hall’s role in acknowledging creators while they’re still around to savor it.

As the show continued, Janet Jackson showed up to induct Jam and Lewis before Sheryl Crow enthusiastically welcomed Benatar and Giraldo ahead of their performance.

Bruce Springsteen was tasked with inducting Iovine, whom he said was "a kid" when he showed up in his orange Mercedes-Benz to mix Born to Run and Darkness on the Edge of Town. The Boss—cannily imitating the exec’s adenoidal voice—retold the classic tale of Iovine's asking if he could have Springsteen’s song “Because the Night” for Patti Smith.

Bolstered by the confidence instilled in him from working with John Lennon, Iovine said, he forged ahead and co-founded Interscope. But amid all his success, he never forgot those who'd helped him down that road. He thanked legendary label boss Doug Morris, Dr. Dre, Trent Reznor, Eddy Cue, Tim Cook, Springsteen and manager/HOF luminary Jon Landau for changing his life.

John Mellencamp, inducting Grubman, delivered a powerful, profanity-laced speech that illustrated the attorney’s impact on behalf of artists—by way of AG’s metaphor of apples that stay on the tree rather than rolling down the hill—and denounced antisemitism and other forms of hate, a not-so-subtle jab at Ye.

“Allen is Jewish, and I bring that up for one reason,” Mellencamp said. “I’m an artist and a gentile whose life has been enriched greatly by my friendship and association with countless Jewish people. I cannot tell you how fucking important it is to speak out if you’re an artist… I don’t give a fuck if you’re Jewish, Black, white, tutti frutti—I don’t care! Here’s the trick: silence is complicity. I’m standing here tonight loudly and proudly and in solidarity with Allen, his family, all of my Jewish friends and the entire Jewish people of the world. Fuck antisemitism and fuck anybody who says anything in that manner.”

Grubman was visibly moved during the tribute. Taking the mic, he noted, “We all sing in our own way. That’s pretty good, isn’t it?” The attorney endeared himself to the crowd of music fans with his haimish delivery and stories of the Hall’s formation (and the spare ribs consumed during the first planning meeting) and how Ahmet Ertegun got I.M. Pei to design the HOF museum in Cleveland.

Backstage, Grubman was nearly moved to tears when talking about Mellencamp’s tribute, calling himself "the luckiest guy in the world" as he reflected on his modest Brooklyn upbringing. “What he was saying is so relevant today,” he affirmed. “It tells you so much about John Mellencamp. I was so proud of him. I was very impressed. What he said was meaningful and important.”

Richie, who was inducted by Lenny Kravitz and joined by the omnipresent Dave Grohl for a rendition of “Easy” prior to his acceptance speech, hit on another prevalent theme—to hell with the doubters—when he said, “The songs I wrote and recorded... I was told by so many people, 'These are the songs that will destroy your career.’” He and The Commodores nonetheless delivered “Sail On” and the Grammy-winning “Three Times a Lady,” bona fide hits for Motown.

U2’s The Edge also gave a moving speech, inducting Annie Lennox and Dave Stewart of Eurythmics, again highlighting the perseverance that sews the music business together, or as he put it, “the crucible of faith and failure.”

The evening began its conclusion with Eminem’s segment. Led by Dr. Dre—who took a risk, he said, signing "a white boy” like Eminem—the 11-minute medley included Steven Tyler joining Em for “Sing for the Moment” and Ed Sheeran on guitar for “Stan.” During his speech, a flustered Slim Shady rattled off the names of his hip-hop heroes—in alphabetical order, no less; from 2Pac to Rakim, he cited dozens of trailblazing artists who'd paved the way for him to take his position as one of the biggest-selling acts of all time and suggested there were plenty of future inductees to be culled from the list.

It was a fitting ending to an evening about the ties that bind rock 'n' roll together—rebellion, disruption and inclusivity. Ultimately, it was indeed all about a vibe—and at the Microsoft, the vibe was strong.