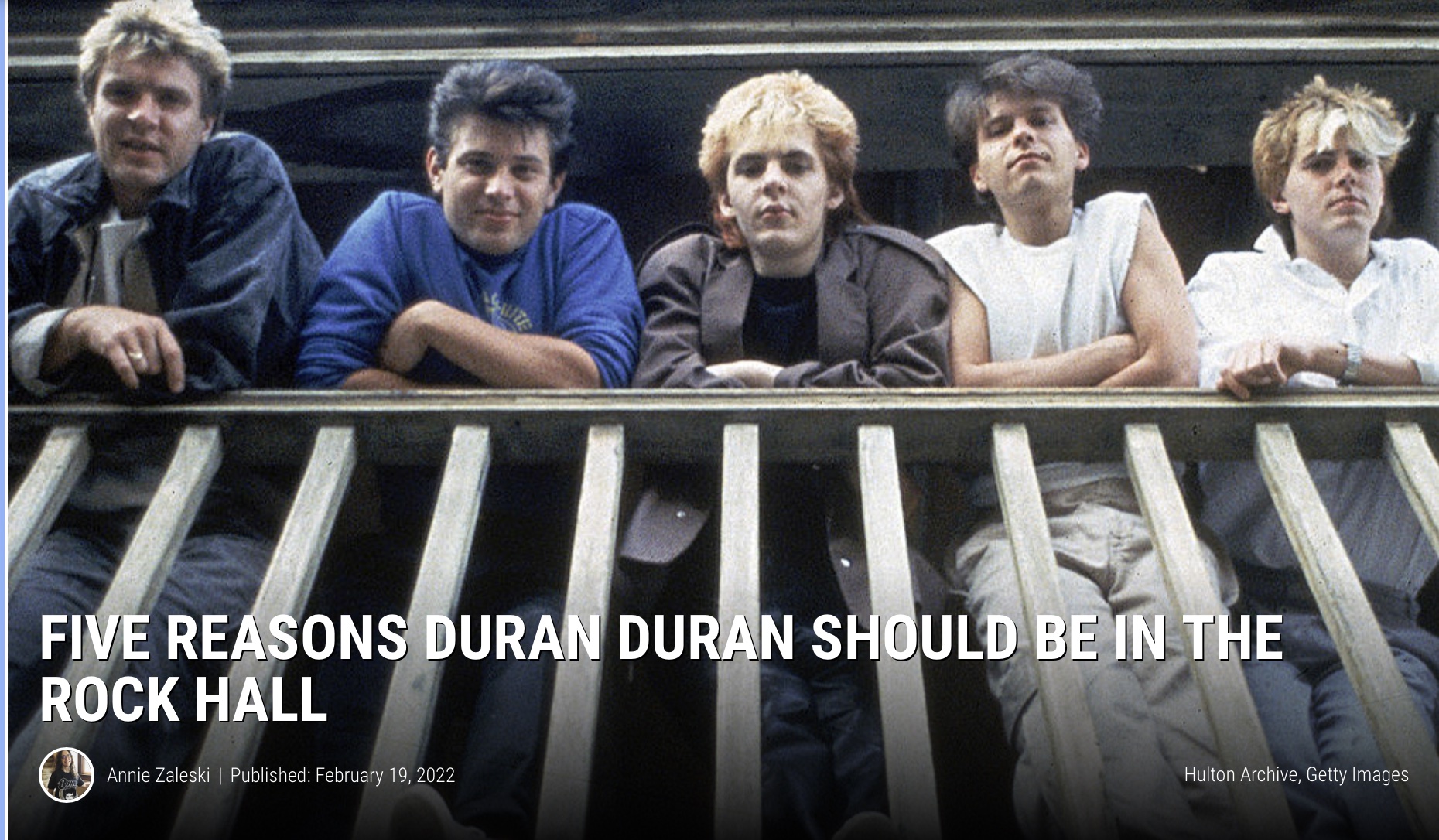 After all, the UK band has sold over 100 million records, won countless awards and have one of the most dedicated fanbases around. They're also still a vibrant creative force making fantastic records, including 2021's futuristic electro-rock fantasia Future Past.

But for Duran Duran, a Rock Hall induction would be the cherry (... ice-cream smile) on top of a 40-plus year career. In fact, many would say the honor is long overdue: The group received their first Rock Hall nomination in 2022, years after they first became eligible.

Future Past stormed into the U.K. Top 5, yet Duran Duran didn't rest on their laurels. Instead, they immediately announced plans for a return to the road. Such staying power is all the more reason the band deserves a Rock Hall induction this year.

So don't cry for yesterday. Instead, get ready to dance on the sand and convince Rock Hall voters to choose wisely. We offer Five Reasons Duran Duran Should Be in the Rock & Roll Hall of Fame.

Their Influences — and Peers — Are Already InductedDuran Duran's major formative influences include Roxy Music, David Bowie, Sex Pistols, Kraftwerk, and Talking Heads — all of whom are Rock Hall inductees. (Their long-time collaborator and influence Nile Rodgers is also inducted.) More notably, the Rock Hall has started embracing music of the '80s, specifically by inducting rock bands (Bon Jovi, Def Leppard) and alternative-rock groups (the Cure, Depeche Mode). The 2021 class even leaned into the MTV generation: Punk-pop icons the Go-Go's received a long-awaited induction. In light of all this, Duran Duran's absence feels like a glaring omission.

Their Musicianship and SongwritingThose who assumed Duran Duran were just pretty faces who couldn't play their instruments is sorely mistaken. Just ask anyone who's attempted John Taylor's fast 'n' furious "Rio" bass line, for starters. Or try and reach the heights of former guitarists Andy Taylor and Warren Cuccurullo, both of whom are top-notch players and arrangers (and Rock Hall nominees too). Or try and replicate Nick Rhodes' atmospheric keyboards, Simon Le Bon's abstract lyrics, and Roger Taylor's steady grooves. From day one, Duran Duran were ambitious, hard-working songwriters who combined disco, funk, punk, glam, art-rock, and post-punk in intriguing ways. Come for dance-floor barnburners such as "Girls on Film" and "The Reflex" — and stay for moody ballads ("The Chauffeur"), sinewy trip-hop ("Come Undone") and unstoppable Bond themes ("A View to a Kill").

They Have a Massive Musical InfluenceInfluence is one qualification for Rock & Roll Hall of Fame induction, and Duran Duran has this on lock. Take a spin through YouTube and marvel at the abundance of cover songs, especially the hit 1993 ballad "Ordinary World." But of the major musical movements of the last few decades — grunge, '90s alternative, Britpop, nu-metal, third-wave ska, '00s punk and emo, progressive metal — chances are good you can find a Duran Duran fan. Their musical influence even continues to show up in surprising places: Hands up if you expected former Ratt vocalist Stephen Pearcy to release an excellent cover of "Girls on Film" in 2021.

Their Music Videos Raised the BarLike Bowie, Duran Duran understood that powerful fashion and visuals could enhance musical endeavors. Naturally, the band and MTV were tailor-made (or is it Taylor-made?) for each other. In the early '80s, as the channel started to grow, they needed more music videos — and more high-quality music videos. Working with director Russell Mulcahy, Duran Duran delivered cinematic Indiana Jones homages ("Hungry Like the Wolf") and gorgeous island scenery ("Rio"), buoying MTV's fortunes and their own burgeoning career. Subsequent videos continued to be ambitious, right up to recent clips such as "Anniversary," which was filmed at Grantham's Belvoir Castle.

Their Quest for Innovation Revolutionized RockIn addition to releasing groundbreaking music videos, Duran Duran have always embraced new technology and innovations. Their 1983 video album, released as VCRs exploded in popularity, won a Grammy Award. The following year's massive Sing Blue Silver Tour boasted video screens, a novelty for concerts of the time. In 1997, Duran Duran were the first band to release a commercial MP3 for download, with the single for "Electric Barbarella." In 2019, the band teamed up with NASA for a show tied to the 50th anniversary of the moon landing. And to support Future Past, Duran Duran launched an AI technology-driven music video for "Invisible" and are also dabbling in immersive 360 reality audio.

Five Reasons Duran Duran Should Be in the Rock Hall , Courtesy UCR/Annie Zaleski