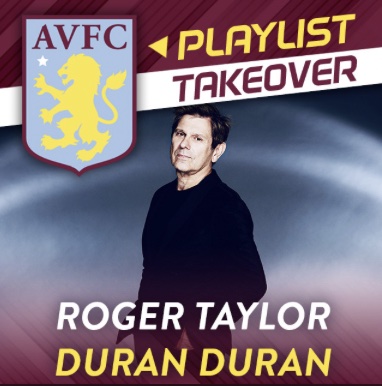 And to mark the occasion, the drummer has been speaking to the club about his love for and affiliation with Villa.

Read our Q&A with Taylor below…

What made you first fall in love with Villa?

My dad Hugh taking me to Villa as a nipper. He always took me to the middle of the Holte End in the days of standing only. Dad would sit me on one of the safety bars and stand behind me so that I didn't get crushed when Villa scored. The colour of the kit and atmosphere in the stands seemed to have a lifelong effect on me.

When you were a kid, which Villa player did you idolize the most?

Colin Withers. I loved the role of the unsung hero in goal. I dreamt of being Villa’s No 1 when I grew up, but I was a small lad and never reached the required height. I took up the drums instead which I guess has a similar status within a band.

If you could choose one of your tracks to be the walk out music at Villa Park for a season, which track would you pick and why?

Probably ‘Wild Boys,’ it has a certain tribal and stirring feel to it.

How do you rate Villa’s season so far? How have their objectives changed since the season started?

It's been absolutely amazing since Steven Gerrard has arrived. I was slightly worried that it was going to be very different for him managing in the Premier League, but he looks like he's made for it. Great signings and a team that looks like it believes again. Our objective now has to be top six.

Steven Gerrard, Tyrone Mings, John McGinn and Ollie Watkins form a band. Who plays what and why?

Steven Gerrard lead vocals - Scousers have singing in their blood. Tyrone on bass as he looks like he has the funk. John McGinn on drums - solid and unassuming. Ollie on keyboard, who could definitely have been in Level 42! Guitar would have to be Matty Cash, as he's really looking the part in the hair department this season.

Tell us about the tracks that you have picked for Villa’s playlist – any stories behind these selections?

I wanted to see if I could pick a whole playlist of music that was conceived in the Midlands over the last few decades. Birmingham has produced some of the most incredible and lauded music in the world and I don't think the city gets enough credit for that.

Roy Hodgson was recently quoted as saying “It was the siren call from the mermaid as the sailor passes by" when talking about how Watford tempted him back.

I think he might need a few lifejackets on board for this one. I see a comfortable 3-1 victory for Villa at home, with the 'Gerrard factor' really kicking in.

Duran Duran's fifteenth studio album ‘FUTURE PAST’ is out now. The official Villa Spotify will feature songs from the new record throughout the season.

You can tune into Aston Villa’s official Spotify playlist online or via the app.