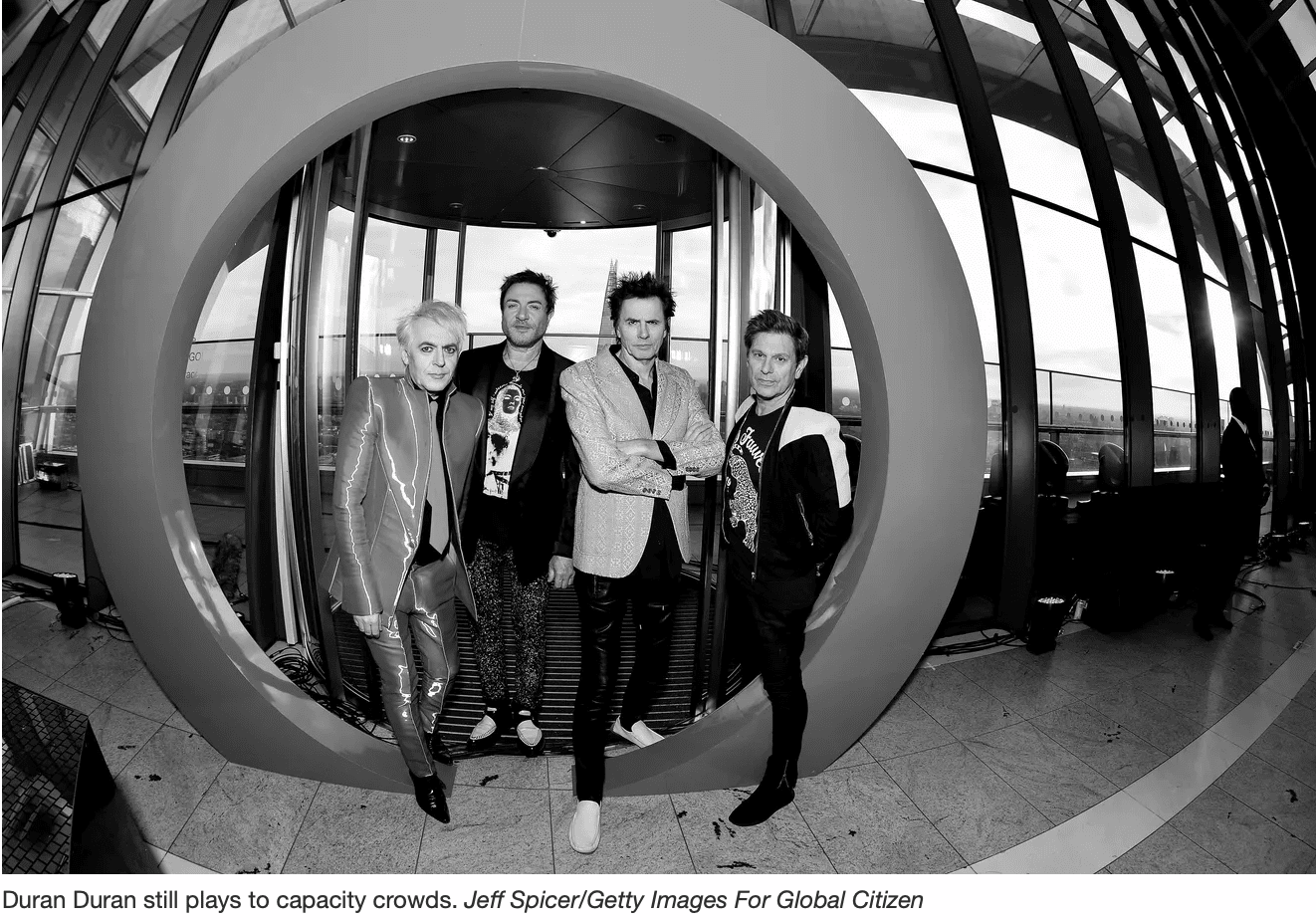 They seem to be having a lot of fun on these shows. "It does feel like that actually," Taylor says.

One reason is how well the "Future Past" songs have been blending with the hits on which their legacy has come to rest, from "Girls on Film" to "Hungry Like the Wolf" and "Rio."

"It's not like we're trying to shoehorn something into the set that's kind of very abstract and not really in keeping with the early material," he says.

In a candid Zoom call from Las Vegas, Taylor talked with The Arizona Republic about keeping the spirit of "Rio" alive while looking to the future in advance of the Phoenix date on a tour where the energy of the fans feels a little like touring the States in the '80s.

My friend who's seen the tour twice says the dance floor-friendly nature of the new songs feels like a bit of link to the earlier records.

We have to thank Erol Alkan, the producer who did most of the record, for that. He wanted to incorporate the earlier kind of grooves into the more contemporary music we're producing. So there was a lot more live playing, a lot more work from John (Taylor) and I in the studio, where we kind of really dug in and created some organic grooves.

Of course, we worked with Giorgio Moroder, who's a real hero of ours. He's very much part of the DNA of those early records. In fact, the first song we ever played live as Duran Duran was "I Feel Love." So to have him come and work on this record has given it that kind of early Duran feel.

Now seems an especially great time for this type of record, coming out of the pandemic.

I think people are ready to party again. The energy coming from the audience is quite like nothing I’ve felt since the early days when we came to America in the early '80s.

Was part of the appeal of titling the album "Future Past" the idea of moving on into the future while also embracing what you like about your past?

I think John and Simon (Le Bon) were describing the sound of the record to somebody. And they said, "Oh, wow, it's kinda like your future past, isn't it? You look into the future, but the record has elements of your past." And John just hooked onto that phrase.

The title has always been so important with Duran Duran. I mean, you think of "Rio." That just tells you almost what's gonna be on the record. "Seven and the Ragged Tiger" was a slightly more complex-sounding record. We were going through a few different avenues. So again, the title kind of tells you that.

This is also a 40th anniversary tour. How does that feel?

It feels great to still be in the building. I can't think of many bands that have been playing together as long as this and still releasing music that's being embraced by the public. We don't kind of sit around saying, "Oh, wow, it's our 40th anniversary." But I think we feel appreciative that we're still recognized, that we can still go out and play, that we can still release new records.

What do you think of those earlier records when you hear them now?

I mean, I'm not one to blow my own trumpet (laughs). I think they sound great. When I hear an early Duran song on the radio, I always think, "Wow, that still sounds great." And I think it's down to amazing production. We've been lucky enough to work with Colin Thurston on the first couple records, Alex Sadkin, Nile Rodgers, Bernard Edwards. It's so important to have the right producer.

I hear Chic records and they still sound amazing. I hear Michael Jackson records. They sound amazing. And I think we're definitely part of that club where the early records sound great. Prince is another one. So it's a great little club to be part of.

Do you recall a point in those early days where it felt like you had really captured what it was that you were going for as the sound of the band?

I do. I remember the exact moment. We'd just finished the "Rio" album and were flying to Sri Lanka to do some videos. Nick (Rhodes) had stayed behind for a few days in London to do more mixing on the record. Nick is such a perfectionist. And he finally finished the mixing.

I got to Sri Lanka and — remember the old cassette Walkmans? — I got a cassette of the album. I sat in my room in Sri Lanka and put on my headphones and I listened to the record all the way through and thought, "Wow, this is quite something. I think we've finally achieved what we've been looking for."

We formed in 1979. But I don't think we really found the blueprint until "Rio." And of course, it's gone on to be regarded as a classic album of the '80s. So I think my instinct was correct.

You took some time away from doing this in 1985. Could you talk about how you arrived at that decision and how it felt to step away from such a huge pop cultural phenomenon?

People couldn't understand why I walked away from this thing that was at the height of its creativity, its fame, its success. I'm a great one for instinct. And my instinct was telling me at that point it was time to take a break. It had been a very intensive five years. And I'd never really had time to experience normal life.

So I said, "I'm gonna take a break. I don't know how long it's gonna be. But I just know I need it." The train was running. And the train was not gonna stop for anybody at that point. It kind of felt like a runaway train. And I needed to get off for a while.

I love to live a normal life outside of work. And I couldn't do that in 1985. It was impossible. So I thought it was time to step away.

Did you miss it?

(Long pause). I think I did after a while. When I heard "The Wedding Album," I thought "Wow, this is a great record and I kind of missing being in that band." So that kind of planted the seed. I did some work with them in '96 around the "Thank You" album. Then eventually, we got together in 2001, which felt great. I'd had a normal life for a while. I'd had kids. I'd moved out of London. And I came back with a freshness.

You'll be taking your place in the Rock & Roll Hall of Fame in November. How does that feel?

It feels incredible. It's such a huge thing to be part of. I really don't know what is not to like about this whole thing. We never got much recognition in the early days from critics or the establishment. And it seems that finally we're getting the recognition that we always thought we deserved. So it feels really great. We're very, very grateful.

Do you have any thoughts on what caused the sort of turning of the tide in how you guys are received by critics and by the establishment?

If we'd have been like a three-album wonder and completely disappeared by 1985, we would've been written off in history as a teen band. Because we'd come out of that kind of teen band experience, if you like. But people have had time to listen and think, "Actually, they've made some great records over the years." We've worked hard at staying together. We've worked hard at making records. And I think in the end we've kind of got our just deserts.

You’ve said you view Duran Duran as something of a work in progress.

We've never been satisfied. Never sat on our laurels and thought, "Wow, we've made three great records and that's it. We've done our thing." There's always been a sense that we've had room for improvement in everything. We always think we can be better. That's very important if you're gonna be around for a long time. You've got to keep looking forward. You can't keep looking over your shoulder.