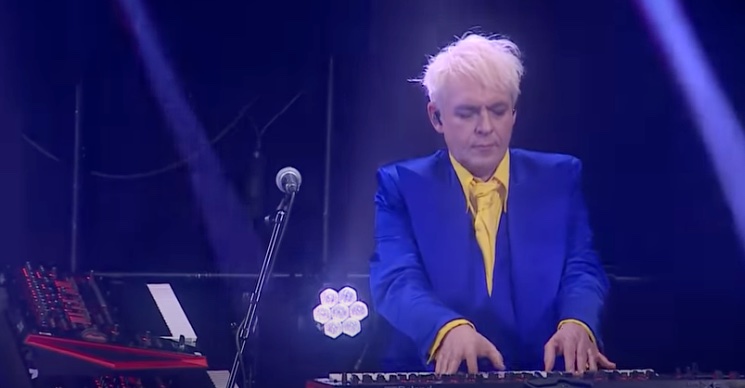 Duran Duran brought their upbeat new song “Tonight United” to the Late Late Show with James Corden. “This song is about the world coming together over music,” said Simon Le Bon as Nick Rhodes, wearing a conspicuous blue-and-yellow suit in honor of Ukraine, ramped up the synths.

The new song, from the band’s new album Future Past, is a reminder of how good these New Wave stalwarts are at updating their sound without letting go of the dance-pop energy we love them for.

Duran Duran begins their North American tour this August at New York’s Madison Square Garden in New York. Nile Rodgers and Chic will open for them on every date.

Earlier this year, Duran Duran was nominated for entrance into the Rock & Roll Hall of Fame’s Class of 2022. All original members of the band are nominated including former guitarist Warren Cuccurullo.“This distinction is due in large part to the fact that we have an army of fans around the world who have unwaveringly supported us for the past four decades,” Le Bon said at the time.

Le Bon’s fellow nominee Dolly Parton didn’t exactly share that enthusiasm. The country music icon made a statement requesting her name be withdrawn from the ballot. Parton later explained her joining the Rock Hall didn’t “feel right,” and likened it to AC/DC getting inducted into the Country Music Hall of Fame.