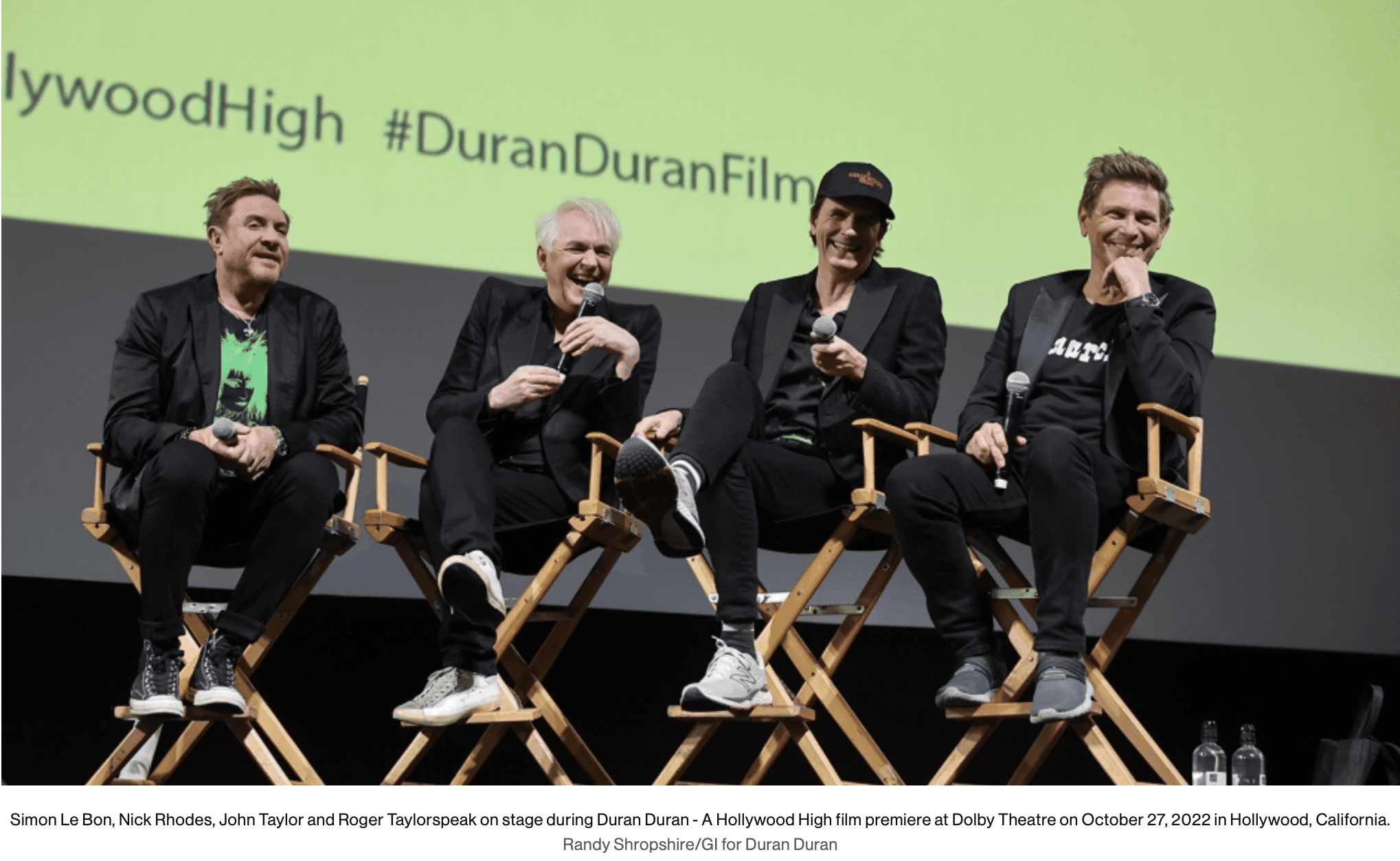 Duran Duran Teases 2023 Tour at ‘A Hollywood High’ Concert Film Premiere in L.A.
The British band may also release its next album in the coming year, keyboardist Nick Rhodes said during the Oct 27 event.

Members of Duran Duran teased a 2023 tour, saying they would return to the U.S. and Europe, and lead singer Simon Le Bon revealed his favorite U.S. venue of all time.
In an onstage chat at Hollywood’s Dolby Theatre on Thursday (Oct. 27), before premiering their docu-concert film, A Hollywood High, the British new wave legends — Le Bon, keyboard player Nick Rhodes, bassist John Taylor and drummer Roger Taylor — confirmed they will be back on the road next year.

Roger Taylor added that the band will hit “all the cities that we didn’t do in the U.S.”

Duran Duran has kept up a busy touring schedule in 2022, playing 35 dates including Midsummer at Skansen near Stockholm and Sommerstemning Lillestrøm near Olso and headliner performances at Tuscany’s famed La Prima Estate Festival near Lido di Camaiore and a special one-night engagement at Caledonian Stadium in Inverness, Scotland.

The band spent August touring U.S. arenas, including a stop at Madison Square Garden in New York on Aug. 25, and an epic three-night run at the Hollywood Bowl for the release of their fifteenth studio album, Future Past.

The band is slated to perform a Halloween show on Monday at the Wynn Las Vegas’ Encore Theatre but would not reveal their costumes — though they did rule out dressing as Santa Claus (Rhodes), an M&M (John Taylor) or a jelly fish (Le Bon). Rhodes said his recent trip to a costume store left him “quite cross” because it was dominated with Christmas wear. “All the fabulous creatures were gone,” Rhodes said.

Responding to an audience member question, Rhodes said the band may also release their album, Reportage, in 2023. “It needs a little work, but it’s possible,” he said.

On Thursday, Duran Duran celebrated Le Bon’s birthday (which is also his father’s) with the movie premiere audience — which sang happy birthday to him before the 75-minute film screened in Dolby Vision-Atomos. The film delves into the band’s early history and connection with Los Angeles to set up a performance earlier this year on the rooftop of the Aster, a private members club in Hollywood. While the group performs at sunset a drone captures sweeping shots in the background of the Hollywood sign and the Capitol Building, which at one point during the show was lit up in the yellow and light blue of Ukraine’s flag in a show of support for the nation’s effort to repel an invading Russia.

The band confirmed that in its four-decade history it had never performed a show on a rooftop, but that it made more sense during pandemic. “We kind of had to be talked into it,” John Taylor said, noting that the band initially planned to perform on a flatbed truck driving along Sunset Boulevard to promote their three-date Los Angeles swing. But that “started getting problematic,” Taylor said. “There was a point where there was a slope. And we were like, ‘How are we going to keep the drums on this?’”

Duran Duran said that the rooftop gig wasn’t intended initially to be turned into a film. “We document a lot of what we do, and it generally just goes into the archive and nobody every sees it,” John Taylor said. The show “was essentially a showcase to launch the American tour. And the fact that we didn’t know we were making a movie, you get an authenticity that you wouldn’t get if we knew we were making a film.”

Roger Taylor said that co-director Gavin Elder “kind of snuck up on us with this film. He didn’t’ really tell us he was making a movie … and [as a result] it’s very real.”

The film hits theaters in the U.S. and around the world on Nov. 3.

While the rooftop was a new special memory for the band, when asked by an audience member what was their favorite U.S. venue of all time, Le Bon enthusiastically endorsed Denver’s Red Rocks Amphitheatre. “You go there, and you look at it and it looks like some ancient alien, space-faring race had just dumped this spaceship there a million years ago,” he said, “and we turned it into a music venue.”