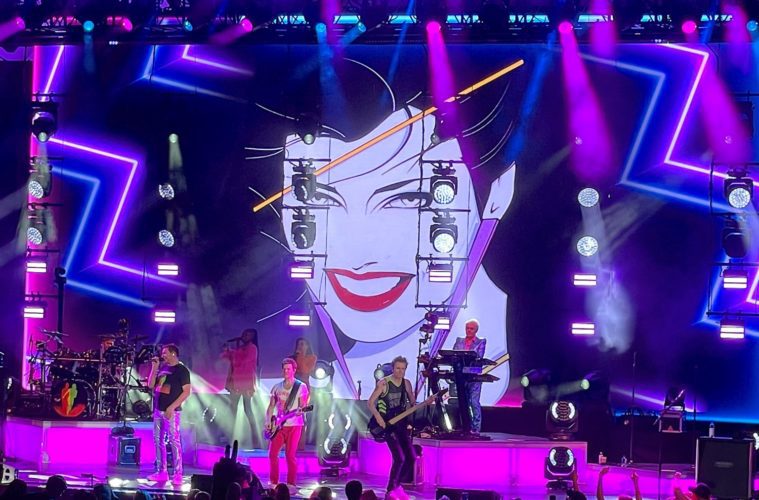 After a sweltering and stressful week, for many in L.A. nothing sounded better than an outdoor flashback track-filled Friday concert from the fine Birmingham, UK fellows known as Duran Duran, especially at the Hollywood Bowl, a venue that never disappoints atmospherically. We didn’t know it’d be quite as, eh, refreshing as it ultimately was though.

We’d never experienced a full music show under an actual rain storm (beyond a few sprinkles anyway) before Friday’s show. We know not everyone felt this way, but thanks to a trusty windbreaker hoodie we were happy as a wet clam watching one of our favorite childhood bands play their hearts out as the clouds above periodically broke open and showered us during multiple well-timed numbers. No less than four songs from the set happened to mention rain [see below for italicized lyric refs] though their most obvious, “Hold Back the Rain” never came.

Things were dry when Nile Rodgers & Chic opened up the Friday show, performing hits from their dance floor days and Rodgers’ collabs with Diana Ross, Sister Sledge, Daft Punk and David Bowie. Rodgers made for a perfect opening act, not only because he’s worked with DD on “Notorious” –which he later returned to the stage with them to play– but because the prolific producer has been enjoying a cultural resurgence as of late, first with his DiscOasis rollerskating events (read our cover story about it here) and just last week as the opening performer at the Taylor Hawkins Tribute at Wembley Stadium, which was also streamed to the world.

Speaking of the world, some of the best Duran tracks happen to be about this big complicated sphere we all inhabit: “Ordinary World,” [came in from a rainy Thursday on the avenue]— an ethereal-style pop ballad about trying to find the comfort of normalcy after a break up, and “Planet Earth,“ [only came outside to watch the nightfall with the rain / I heard them making patterns rhyme]— which has always felt like a subtle ode to David Bowie’s star-dusted aesthetic; he clearly influenced the band heavily when they emerged as the most versatile and viable group from the British New Romantic and New Wave scenes.

With their multi-colored hair and guy-linered glamour, Duran Duran were the literal poster boys for the androgynous 80’s. Girls especially couldn’t resist their good looks, catchy dancey tracks and stylish videos, to the point of obsession and self-proclaimed “Duranee” devotion. On this “Future Past 40th Anniversary Tour,” as it’s called, the band and their fans have obviously matured (we admire Nick Rhodes’ still-edgy haircuts and makeup at 60 years of age, though). Still, their energy has not been diminished with age, even during torrential downpour.

Beyond “Planet Earth,” we were most excited to hear “Friends of Mine” and “Careless Memories” off their self-titled debut. Yes the Nagel girl covered classic Rio is the record most fans treasure, but we love the first LP just as much. “Memories” in particular was delivered with urgency and vibrant visuals that made it feel fresh yet still dramatically retro in tone.

“Reflex” and “Wild Boys” [And your telephone’s been ringing while you’re dancing in the rain] had similarly revved up rhythms. John Taylor’s sexy bass lines, as always, did most of the heavy lifting and we loved every minute. Simon Le Bon’s unique croon hasn’t changed much. He did go slightly off key a couple times during some sustained choruses, but the richness and layers of DD’s music and the Bowl’s stellar acoustics, made everything blend together beautifully regardless, especially during covers of “White Lines” and Bowie’s “Five Years” [it was cold and it rained so I felt like an actor] which saw a surprise sit-in from pianist Mike Garson.

After the week’s crazy weather and harrowing headlines (there was a brief moment and projection honoring the queen of England, who died the day before), and as we all struggle to enjoy music in a communal setting post-COVID, nostalgic concerts such as this one feel more life-affirming than ever. The rain, which subsided for their shows the next two nights, added to the momentousness Friday night. Even if they didn’t play gems like the gothy glider “The Chaffeur” or the sexy stomp “My Own Way,” it was an all-encompassing experience. Duran Duran didn’t just shower L.A. with the soundtrack to many of our pasts, they inspired us to enjoy a unique music moment in the present and feel hopeful for the future, too. Days later, we’re still thinking about it and still soaking in it.