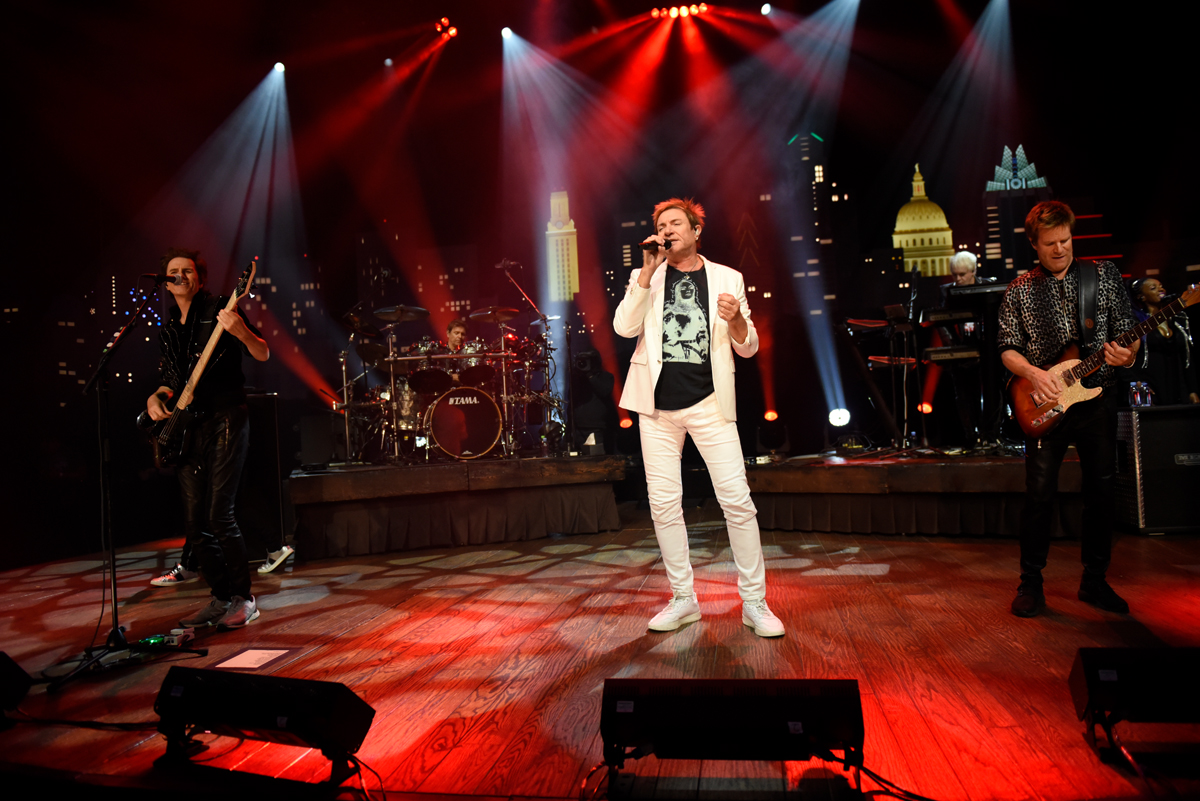 At a time when so many of their early eighties peers have succumbed to nostalgia tours and the revival circuit, Duran Duran has remained on top, not only popular but relevant. That’s partly because the Birmingham superstars still clearly enjoy what they do – no paycheck-cashing cynicism here. But it’s also because the band acknowledges its past while continuing to move forward, making new music with the same interest and passion as it has since its eighties beginnings. As they proved with their debut taping for Austin City Limits, and with new album Future Past imminent, Duran Duran still has the fire.

When Terry Lickona introduced the band, the crowd gave a roar like a tidal wave, the likes of which we rarely hear. Following a couple of minutes of funky instrumental groove building anticipation, the superstar act took the stage and the roar returned, singer Simon Le Bon, keyboardist Nick Rhodes, bassist John Taylor, drummer Roger Taylor, joined by guitarist Dom Brown, saxophonist Simon Willescroft and singers Anna Ross and Erin Stevenson, reveling in the kind of attention a group that’s thrived for decades deserves. The Durans opened with new song “Invisible,” a minimalist synth funker from the upcoming record that bodes well for the new music to come. Bona fides thus established, the band went right into one of its biggest hits: the 1985 #1 smash “A View to a Kill,” the theme song for the James Bond film of the same name. The energy level went up even higher with “Notorious,” the song’s funk beat clearly galvanizing Le Bon and John Taylor, to the audience’s delight. “Anybody celebrating a birthday tonight?” the perpetually smiling singer asked. “We celebrate our birthday every night!” That was the lead-in to new single “Anniversary,” a pop banger that doubles as a nod to the forty years that have passed since the release of the Durans’ first album.

Backup vocalist Ross joined Le Bon at the front of the stage to duet on the melodic 1993 top ten hit “Come Undone,” from the group’s second self-titled album (AKA “The Wedding Album”). Doffing his white jacket, Le Bon got his groove on for “Pressure Off,” a late-career high point from the 2015 LP Paper Gods that reminded everybody that this band has never forgotten how to be danceable, the vocalist leading the eager crowd into a disco clap-along. The Durans then dug deep into their catalog for the cheeky rocker “Friends of Mine,” a highlight of the band’s very first album, and a song Le Bon seemed to particularly enjoy singing. “This is one of the best little shows we’ve played all year!” he claimed after the song finished. The band then got serious for a minute, with Le Bon dedicating the next song to everyone struggling in the past eighteen months. That song was, of course, “Ordinary World,” the band’s massive, ice-melting ballad from 1993, given new resonance in 2020s reality. From that undeniable classic the Durans offered up another new song, another upbeat dance rocker entitled “Tonight United,” driven by John’s grooving bass.

The band kept the energy level high with “(Reach Up For the) Sunrise,” a vibrant, guitar-heavy rock anthem from their 2004 album Astronaut. “Put your hands up,” the song demanded, and the audience eagerly acquiesced. Ross and Stevenson returned to the front of the stage to assist the band for their outside-the-box cover of Grandmaster Flash’s anti-cocaine protest tune “White Lines (Don’t Do It),” just in case anyone had forgotten Duran Duran’s essential eclecticism. The group then boomeranged back to the beginning, with the distinctive synth intro and new wave groove to the band’s first hit, the still-thrilling “Planet Earth.” The audience went wild, but really upped their game when Le Bon asked, “Did you drink your champagne and eat your caviar…or is anybody hungry?” That led, of course, into “Hungry Like the Wolf,” the band’s hit of all hits, and one that turned the Moody into a monster dance party. The band wasted no time going right into “Girls On Film,” taking the performance and the crowd straight up to nirvana. The song segued into an appropriate cover of Calvin Harris’ “Acceptable in the 80s,” the groove of which Le Bon used to introduce the band, before going into the song’s chorus of “shooting star” – as appropriate a send-off to the set as could be hoped. The Durans quit the stage to wild cheers and applause.

They returned, of course, as Le Bon extolled the crowd to raise their cell phones and turn the lights on. Sea of lights thus established, the band performed “Save a Prayer,” letting the fans sing the chorus and taking them out on a wave of beauty instead of the expected bombast. “Austin City Limits, thanks for having us!” John Taylor said, with firm agreement from Le Bon, and Duran Duran left the stage for the final time. It was a terrific show, one for the ACL ages, and we can’t wait for you to see it when it airs early next year as part of our Season 47 on your local PBS station.

Previous Article
Duran Duran Keep Their Feet on the Dance Floor With “Future Past”
Next Article
ACL Fest Day 3: Duran Duran Soars
News
Back to all news