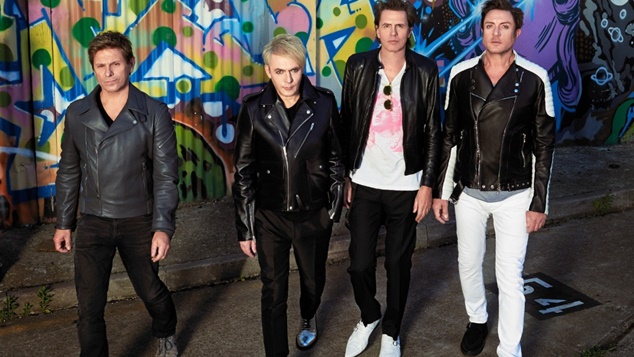 Duran Duran have a new album, Future Past, it’s the fifteenth album of their career, a journey that began forty years ago.

This time round their continuing their collaboration with Producer Mark Ronson, who they worked with on their previous two records, but they have also forged new alliances with Erol Alkan and legendary producer Giorgio Moroder. Blur guitarist Graham Coxton plays on the entire album, and has been involved in writing six of the 12 tracks on the standard version of the album. Plus there are guest appearances from Tove Lo, Ivorian Doll, Japanese band Chai, and pianist Mike Garson.

The album kicks off with Invisible, the single which came out back in May, it’s a laid back and moody number and while similar to many songs in Duran Duran’s long career, it’s not the thing they normally choose for a single. Things quickly pick up with All of You which combines crunchy synths with a solid rock sound, Simon Le Bon’s vocals soaring over the mix.

Give It All Up is a collaboration with Tove Lo, and the combination of vocals is delightful, Anniversary is a thumping tune capturing a classic Duran Duran sound, Future Past is a bid of a dud album filler track, but things pick up again with Beautiful Lies the first of their collaborations with Giorgio Moroder – it’s a tune that builds to a crescendo and time travels back to an 80’s disco.

The second Moroder collaboration Tonight United has some great synth sounds and John Taylor’s bass is front and centre. Hammerhead which sees the band teaming up with Ivorian Doll is a moody tunes with the sound of space lasers firing in the background and possibly the first rap sequence in the band’s career, while More Joy! featuring Japanese band Chai is a catchy song that sounds like Miss Pacman was a collaborator – in a good way.

The album closes with Falling, it opens with a melancholy piano sequence before exploring a jazz and ambient soundscape. It’s a musical adventure. The latest release from the band holds up against the previous work, and if you’ve followed them through their long career, you’ll enjoy another slice of what Duran Duran serves up.

Courtesy Out in Perth