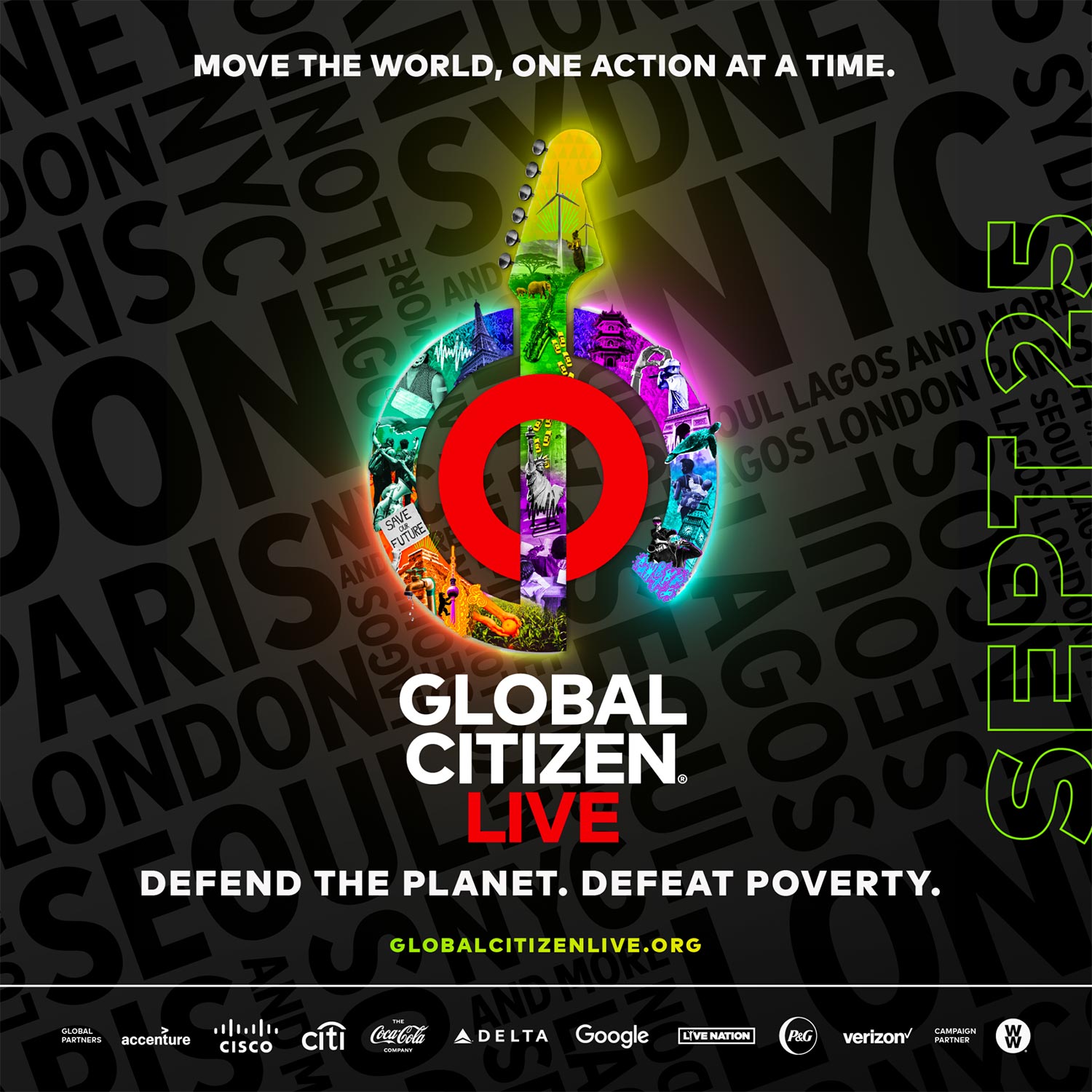 The 24-hour live broadcast event will feature artists, activists, and world leaders taking the stage at iconic locations across the globe, including: live events in Central Park in New York City, and the Champ de Mars in Paris; live-crosses from Dubai, London, and Los Angeles; and performances and hosted segments from Lagos, Rio de Janeiro, Seoul and Sydney. Additional locations and location-specific details will be announced in August.

“COVID-19 has drastically reversed the progress toward achieving the United Nations Global Goals, pushing upwards of 160 million people back into extreme poverty and more than 40 million to the brink of starvation. Progress on climate change has halted, as many in the Fortune 500 fail to set science-based carbon reduction targets. We must rectify the damage done and hold world leaders accountable for ensuring that the entire world recovers from this pandemic together. ‘Equitable recovery’ is not an act of charity - it is the only way we can ensure a fighting chance at achieving the Global Goals.” - Hugh Evans, CEO, Global Citizen

Global Citizen LIVE is part of Global Citizen’s overarching Recovery Plan for the World, a year-long campaign to help end COVID-19 by calling on governments, philanthropists and the private sector for financial commitments to kickstart a global recovery. Ahead of October’s G20 Summit, and COP26, the Global Citizen LIVE campaign will call on world leaders, major corporations and foundations to defend the planet and defeat poverty by:

*Helping end the pandemic by donating at least 1 billion doses to those most in need by September. With the growth of infections in sub-Saharan Africa now the fastest in the world, and still less than 3% of Africans receiving a dose compared to over 50% in the United States, world leaders must finally act with the energy and urgency needed to stave off further catastrophe.

*Reverting the Hunger Crisis facing the 41 million people on the brink of starvation by contributing at least $6 billion to famine relief efforts. This is less than 1% of the $1 trillion currently sitting idle in private foundations in the US alone, yet new figures released showhunger has risen more in the last year compared to the last 5 years combined.

*Resuming education by getting 4.5 million kids most in need back to learning by contributing $400M towards education. With only one in three children globally able to access remote learning during COVID-19 and the pandemic causing more than a 50% increase in the number of children worldwide who have had their learning disrupted by crisis, millions of children may never return to school unless leaders act now.

*Combating climate change by getting the world’s largest companies to join the Race to Zero and commit to science-based targets to reach net 0 emissions by 2030, in line with The Paris Agreement which aims to prevent global temperatures from rising beyond 1.5ºC above pre-industrial levels. Only a quarter of Fortune Global 500 companies have made a public commitment to become carbon neutral, use 100% renewable power, or meet a science-based emission reduction target by 2030.

“I am happy, once again, to join forces with Global Citizen for this important event – both as Italy and as this year’s G20 Presidency. The challenges ahead of us call for concerted efforts by Governments, civil society and the private sector. We need to act together to overcome the pandemic, recover better, and address the key issues of our time, including climate change, enduring inequalities and the need for sustainable and inclusive growth.” - Mario Draghi, Prime Minister of Italy and G20 Chair

“The COVID-19 pandemic once again reminds us: Global crises require global solutions. We must act together to end the pandemic. And we must not forget those who are affected by extreme poverty and hunger. The UN Sustainable Development Goals are and will remain our compass for a better world. This is why, in 2021, Germany will continue to actively work towards the achievement of the Global Goals.” - Angela Merkel, German chancellor

“The COVID-19 pandemic has exacerbated many of the challenges we are facing. Global health, climate change, education, inclusion and food security require us all to work together and step up our efforts. Let us commit to building back better from this crisis, guided by the Sustainable Development Goals.” - Erna Solberg, Prime Minister of Norway

"At this defining moment, we must reignite our efforts to keep the promise of the Sustainable Development Goals (SDGs). Global Citizen LIVE demonstrates how we can come together to build a world where everyone thrives in prosperity on a healthy planet." – Amina J. Mohammed, Deputy Secretary-General of the United Nations

“I’m delighted to support Global Citizen Live. COVID-19 has emphasized the importance of international collective action. At the same time we should not forget about the many other challenges of our time, some of which have increased due to the pandemic. While we engage on the path of recovery, let’s join forces and innovate to make our world more fair, sustainable and inclusive.” - Alexander De Croo, Prime Minister of Belgium

"Through more frequent and intense floods, droughts, and storms, climate change is already pushing millions to the brink of starvation. A failure to support farmers and communities to adapt to this crisis is also a failure to guarantee individuals and families can feed themselves and thrive. This is why I am supporting Global Citizen Live, to ensure there is an inclusive, global, and collective action for climate adaptation in agriculture, - leaving no one behind." - Ban Ki-moon, 8th Secretary General of the United Nations and Founder of Ban Ki-moon Center for Global Citizens

Global Citizen LIVE and the organization’s Recovery Plan for the World are supported by a coalition of many of the world’s leading corporations including its Global Partners: Accenture, Cisco, Citi, The Coca-Cola Company, Delta Air Lines, Google, Live Nation, P&G, Verizon, and campaign partner WW International, who will work together to engage support from the private sector in driving new commitments toward the campaign’s policy objectives. Access Bank, will also support the Global Citizen LIVE campaign as a local partner in Nigeria.

Over the past decade, Global Citizen has championed the most pressing social and environmental issues and joined the fight to end COVID-19, most recently with VAX LIVE: The Concert To Reunite The World in May, which mobilized more than 26 million COVID-19 vaccine doses and $302 million to the ACT-Accelerator for equitable health access to countries most in need. Global Citizen's VAX LIVE was a bookend to two campaigns Global Citizen produced during the height of the pandemic in 2020 -- One World: Together: At Home, in April 2020, in support of healthcare workers in their fight against COVID-19, and Global Goal: Unite for Our Future, in June 2020, in partnership with the European Commission, which secured funding and global political support to ensure COVID-19 testing, treatments and vaccines were available to all. Since March 2020, Global Citizen has mobilized $2 billion in cash grants to fund global pandemic relief efforts, and over 26 million COVID-19 vaccine doses.

ABOUT GLOBAL CITIZEN:
Global Citizen is the world's largest movement of action takers and impact makers dedicated to ending extreme poverty by 2030. With over 10 million monthly advocates, our voices have the power to drive lasting change around sustainability, equality, and humanity. We post, tweet, message, vote, sign, and call to inspire those who can make things happen to act — government leaders, businesses, philanthropists, artists, and citizens — together improving lives. By downloading our app, Global Citizens learn about the systemic causes of extreme poverty, take action on those issues, and earn rewards with tickets to concerts, events, and experiences all over the world. Global Citizens have taken over 28.4 million actions since 2009. Today, these actions, in combination with high-level advocacy work, have led to over $35.4 billion being distributed to our partners around the world, impacting 1.09 billion lives in the fight to end extreme poverty. For more information, visit GlobalCitizen.org.