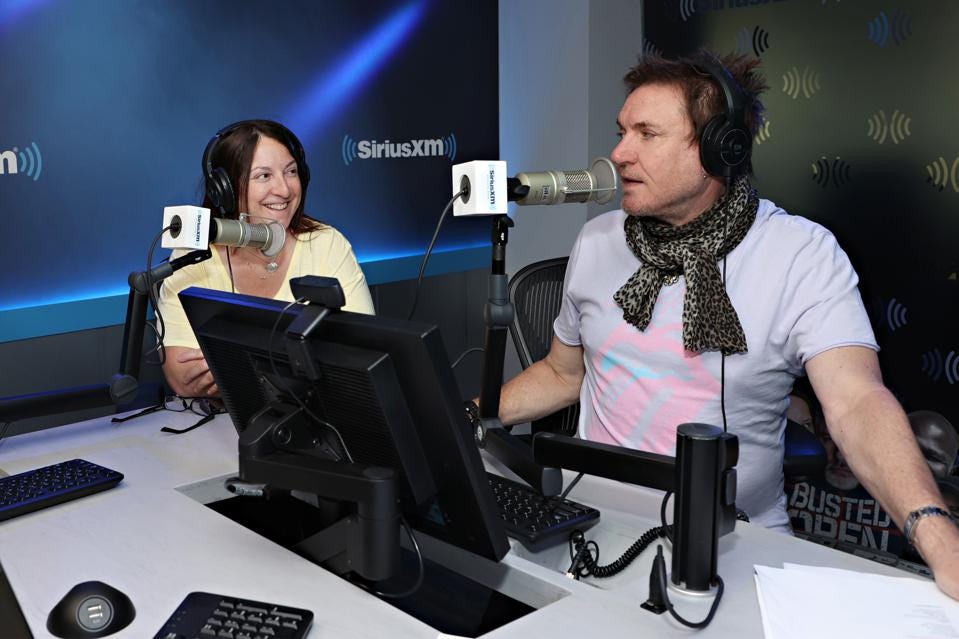 Before the pandemic lockdown in March 2020, the British rock band Duran Duran were in the process of completing work on their 15th studio album Future Past. When the world did shut down, it resulted in the postponement of the album's release by a year. During that long hiatus between studio work and touring, the band members looked to other ways to stay engaged with the public via online: bassist John Taylor did a bass tutorial and also chatted with his bandmate, keyboardist Nick Rhodes, on Instagram Live, while drummer Roger Taylor recorded a series of videos highlighting his desert island discs.

For his part, Duran Duran singer Simon Le Bon eased into an unexpected role: that of a deejay for his weekly music radio show WHOOOSH!, which co-hosts with Katy Krassner, a longtime associate of the band. WHOOOSH! has been airing on SiriusXM since January after it first launched as a podcast on DuranDuran.com over a year ago.

"It all began as a lockdown thing," Le Bon said in a press statement. "It dawned on me that the only music I was listening to was what I was working on, and the stuff that got me into a band in the first place. So I switched on my ears, and went on a trip down a sonic rabbit hole. What a revelation—there is so much great new talent, so much music out there. Katy is the foil that makes it all work. And so a radio show is born. WHOOOSH!—it's the sound of your mind expanding to take on a new idea."

“I've known him forever,” Krassner says of Le Bon, “and I've never known him to be this excited about something week after week. It's really nice for both of us. He's become a tastemaker whereas maybe people thought of John or Nick in that way and not necessarily him. Now people talk about Simon that way, and artists that are played tag the show in social posts. It's really been rewarding for him.”

Krassner recalls the conversation she had with Le Bon about doing a music podcast during the band's period of inactivity. “He said, 'Alright, you wanna do it with me? 'We'll just talk and play a bunch of songs,’ and I'm like, 'Okay.' We joked that the very first song we ever played was [America's] “A Horse With No Name”—that was the first single Simon ever bought as a kid. That was like how off-the-cuff the show was. [We] put it on YouTube and it got a lot of reaction. We're thinking, ‘Should we do this every week?’ The band's management was encouraging, and then we started doing it every week.”

Each show episode focuses on new music curated by Le Bon from emerging artists, while Krassner provides the backstory about them. Among the musicians are Twin Shadow, Rolling Blackouts Coastal Fever, Mike Kota, deep tan, Matthew E. White, Sinead O'Brien, and the Japanese female rock band CHAI who appeared on Future Past. “That's one of the bands that I personally discovered in the course of putting together playlists for the radio show,” Le Bon told Newsweek this past summer. “And I love CHAI. I think they're so great.”

Before America caught up with hot British indie act Wet Leg, WHOOOSH! was one of the first non-U.K.-based outlets to play the duo’s music. “I recently saw a friend's top 10 singles of 2021 posted online and [Wet Leg’s] “Chaise Longue” was their number one song. I asked, 'Did you first hear that on WHOOOSH!?' And she said, 'Yes.' I feel like we sort of spotlighted them in a big way because Simon talked about the song over many episodes. I saw people that I wouldn't have thought listened to WHOOOSH! say, ‘Oh, I first heard this song on a show on Sirius.’ We weren't exactly name-checked, but I know they were talking about us. And so that was cool.”

Part of what's so [exciting] about this,” says Krassner “and certainly more for Simon than for me, is he gets to hear all this great new music. I think he feels like he's in a position to give back, and say to these lesser-known artists: ‘I have a platform and I want to draw attention to your music.’ For the most part, he does not play bands with huge followings. Of course, every now and again, there's like Tame Impala or a reggae act that has a huge Instagram following. But for the most part, most of the artists he plays don't have big followings. It's really nice for them to get to be promoted by him.”

On past occasions, the program has featured guests—among them actress and Duran Duran fan Wendi McLendon-Covey (Bridesmaids, The Goldbergs). Aside from the music played on the program, a key part of WHOOOSH! has been the spontaneous and witty repartee between Le Bon and Krassner. “A lot of people say to me, 'Oh, you were born to do this,' which is a lovely compliment,” she says. “I couldn't do it with just anybody. This isn't my vocation and I didn't study to do this. Even though I spent many years as a publicist and then in social media, this is not my forte. I could really only do it with someone like Simon, with who I have that sort of a brother-sister relationship. We don't really plan or script anything, so what you hear is just us talking.”

As of this writing, WHOOOSH! is now at over 80 episodes and counting since its launch last year. Even amid a busy schedule involving his band, Le Bon has been consistently taping show episodes every week. “I don't know how it will change when the band goes on tour, to be honest,” Krassner says. “He seems pretty dedicated. Maybe our schedule will be two every other week rather than once a week because it'll get hectic for him with traveling and especially when they tour overseas, but we'll see. We're gonna try to keep it going as long as we can.”

Krassner has officially worked with Duran Duran for over 25 years and oversees their social media presence as well as the popular ‘Ask Katy’ forum on the band's website, in which fans submit questions for the band members to answer. Long before entering Duran Duran's orbit on a professional level, Krassner, who is from New York, grew up as a teenage fan of the band in the early 1980s and saw them play at Nassau Coliseum at the height of Duranmania. “I don't know who wasn't a Duran Duran fan,” she says. “When I was growing up, I definitely had pictures on my wall of Adam Ant, Matt Dillon, Def Leppard, Duran Duran. I was in the right age group and caught up in their mania.”

As Duran Duran experienced a resurgence in popularity during the mid-Nineties with their hit song “Ordinary World,” Krassner joined the band's then-management company Left Bank in America. By that time, the group's lineup consisted of Le Bon, Rhodes, John Taylor and guitarist Warren Cuccurullo. “I remember it very distinctly,” she recalls about meeting them. “I came to their hotel and they were in a huge suite and they were doing a photoshoot with Entertainment Weekly. I think my mother had bought me a suit from SYMS. (laughs) I didn't know anything about being cool. I had a green Kerropi backpack, this gigantic hair and ill-fitting suit from SYMS. And they were like, ‘This is amazing!’ (laughs) And that's how it started. I was traveling with them for the next month, and they took me on. That was it.”

She adds: “They exceeded my expectations a lot, because I worked with a lot of groups when I worked at Left Bank. Some of them were great, and some of them were total divas, total jerks. Duran Duran were never like that.”

This year marked the 40th anniversary of Duran Duran's self-titled debut album, and the band's masterpiece Rio will also hit the big 4-0 in 2022. As indicated by the positive reception to Future Past, Duran Duran has long transcended their teen heartthrob status as the ‘Fab Five’ (Le Bon, Rhodes, John Taylor, Roger Taylor and original guitarist Andy Taylor) to become an influential band for future generations of rock and pop bands. “With Duran Duran, in the beginning, you had five very unique looks and unique personalities,” Krassner says. “They were not at all alike. They each offered something different, and I think that's still true to this day. They each bring something new to the table, they all are still very committed to Duran Duran, making new music, staying current and being true to what they set out to do 40 years ago. I can't think of another band from their era that stayed together the whole time and kept putting out quality music.”

Beyond the professional association, Krassner's relationship with the band members is also personal. “What's also really fulfilling for me as a parent [is] my children sort of coming along for the ride. My son is a drummer, and every time they were rehearsing in New York, John and Roger talk to him about music and they play with him. They're really just encouraging. Nick is my son's godfather. They're all so good to my kids. It's such a family at this point.”

WHOOOSH! can be heard on SiriusXM Volume (channel 106) every Wednesday at 9 PM ET, and rebroadcasts at 3 PM and 10 PM on Saturdays and 2 PM on Sundays.