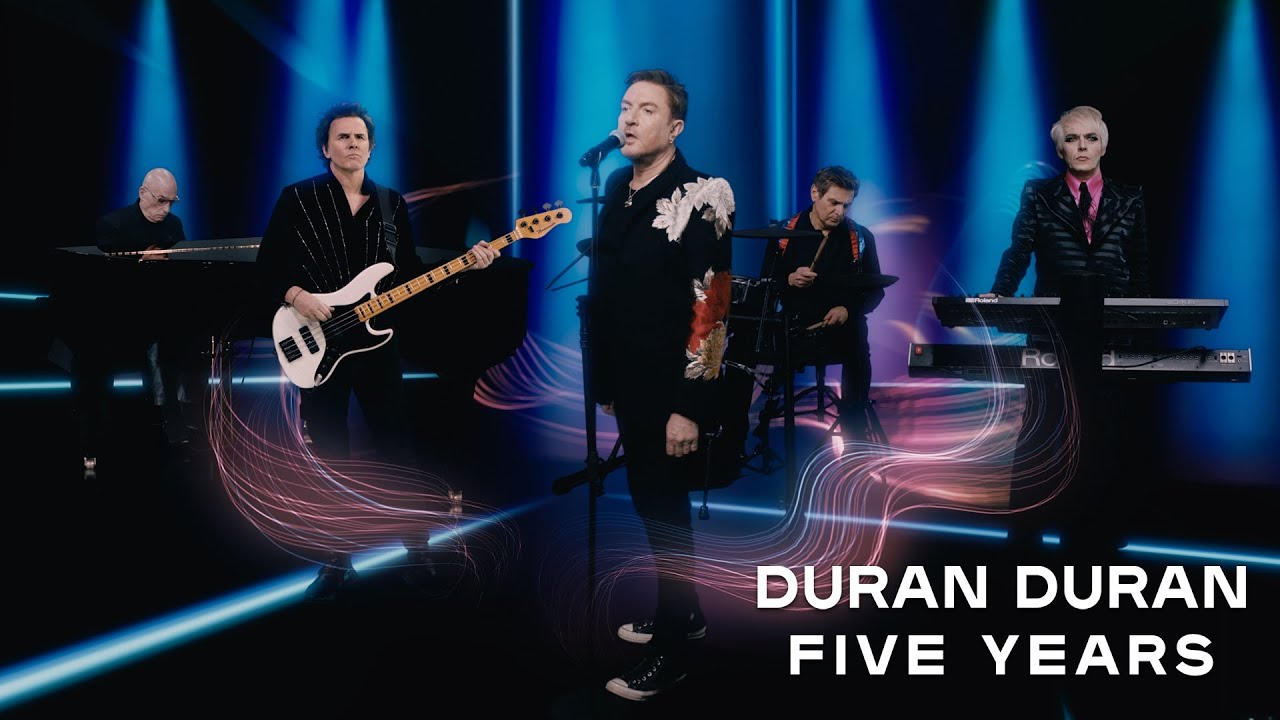 Directed by regular collaborator Gavin Elder, and using state of the art technology and VFX, Elder oversaw the filming of each band member remotely in both London and Los Angeles and incorporated the work of experimental artist Teek Mach – known for capturing the human touch in virtual and digital spaces, using Titlbrush and Unity – collectively creating a truly unique and modern music video, fit for these times, bringing each band member together in one space, virtually.

"Shooting in lockdown was challenging as we had to film the band members one at a time, but this gave each of them the opportunity to deliver a unique and intimate performance,” explains Gavin Elder. Virtual Production Producer Scot Barbour continues: “Not only did we get to work with the megastars in Duran Duran, but also with some unique technical processes. Producing this video was a collaborative effort that certainly stretched across the Pond. The production team shot three of the band members, the two backing singers and the string section separately in London, under Elder’s direction, and then completed the filming with Kerry Brown’s Rolling Live Studios team in Los Angeles, for guest pianist Mike Garson, and Duran bassist John Taylor. I then conformed the edited footage from London and exported the selects to our VFX team at Mercury Studios who handled all of the compositing work in Nuke. Between us, we established a unique pipeline to achieve the desired look and feel of the video." In yet another Duran Duran ‘first’, this marks the first time that Tiltbrush, Unity, Nuke, Premiere and Resolve have been combined in this way to create a music video.

Duran Duran’s touching tribute was first seen and heard as part of Mike Garson’s ground breaking ‘A Bowie Celebration: Just For One Day!,’ the highly anticipated and applauded global virtual concert that took place on January 9th in celebration of what would have been David Bowie’s birthday weekend. Founding member and keyboardist Nick Rhodes shares: "David Bowie’s apocalyptic vision in the song Five Years was written almost half a century ago yet it seems ever more poignant today. Although it is five years since David left Planet Earth, his vast catalogue of songs remain as significant and inspirational as they always have been. Mike Garson’s heartfelt celebration show was a testament to the breadth of influence that David had on other musicians. It was also a display of the deep affection and gratitude for what he gave to us all.”

On the cover and how it came about, Rhode’s also reveals, “When Mike Garson asked if we would consider participating in his show, collaborating on a Bowie song with him, the one that instantly came to my mind was Five Years. Later that same day we received news that Mike had specifically requested we should do Five Years... sometimes things just feel right… nobody in the band even questioned the choice, we all embraced it and channeled the excitement and joy the song brought to us when we listened to it as young kids, spectacularly opening the Ziggy Stardust album."

In other news, SiriusXM and Pandora announced the launch of two new talk and music programs for 2021 that delve into the music, career, and influence of Duran Duran, the iconic, global super band whose work now spans four decades.

Duran 40 on Pandora features the band’s biggest hits and fan favorites from across their career, gathered in a new original format merging music and talk. The collection includes all four band members along with special guests providing commentary on the making of, and inspiration behind the music. Special guests Mark Ronson and Nile Rodgers will join Duran 40 as they share personal memories and stories about Duran Duran’s body of work. Pandora’s Duran 40 will be hosted by the BBC’s Claudia Winkleman; the program will be available exclusively via Pandora starting January 28, with broadcast versions airing on SiriusXM’s Volume (channel 106) and First Wave (channel 33).

Additionally, Duran frontman Simon Le Bon will host WHOOOSH!. The first episode aired this Wednesday, January 27 at 9 PM ET exclusively on SiriusXM’s Volume channel. WHOOOSH! is a weekly music show featuring Le Bon chatting and playing some of his favorite records including new discoveries. Le Bon is joined by Duran insider and band associate Katy Krassner as they discuss their latest song obsessions and new music that excites them. WHOOOSH! first debuted on Duran Duran’s website in 2020, and now moves exclusively to SiriusXM with all new programs in 2021 airing on the Volume channel and as a new podcast.

“It all began as a lockdown thing,” said Simon Le Bon. “It dawned on me that the only music I was listening to was what I was working on, and the stuff that got me into a band in the first place. So I switched on my ears, and went on a trip down a sonic rabbit hole. What a revelation - there is so much great new talent, so much music out there. Katy is the foil that makes it all work. And so a radio show is born. WHOOOSH! - it's the sound of your mind expanding to take on a new idea.”

SiriusXM listeners can find WHOOOSH! on the Volume channel on their SiriusXM radios and can listen to it as a podcast on the SiriusXM app. Streaming access is included for most subscribers. Go to www.siriusxm.com/ways-to-listen to learn more.

Duran 40 joins Pandora’s extensive roster of exclusive programming including Pandora Stories, Wake Up!, Listen In, Game Time, and more. Pandora Premium subscribers can listen to Duran 40 on-demand, and Pandora ad-supported and Plus listeners can do so via Premium Access after watching a 30-second ad. For more information on Pandora Premium, go to www.pandora.com/upgrade/premium.

With 2021 marking 40 years since the release of their eponymous first album, internationally acclaimed, multi-platinum and award-winning pop legends Duran Duran plan to return to the stage in the UK and Europe this summer for a handful of live dates. For more information and tickets go to: http://duranduran.com