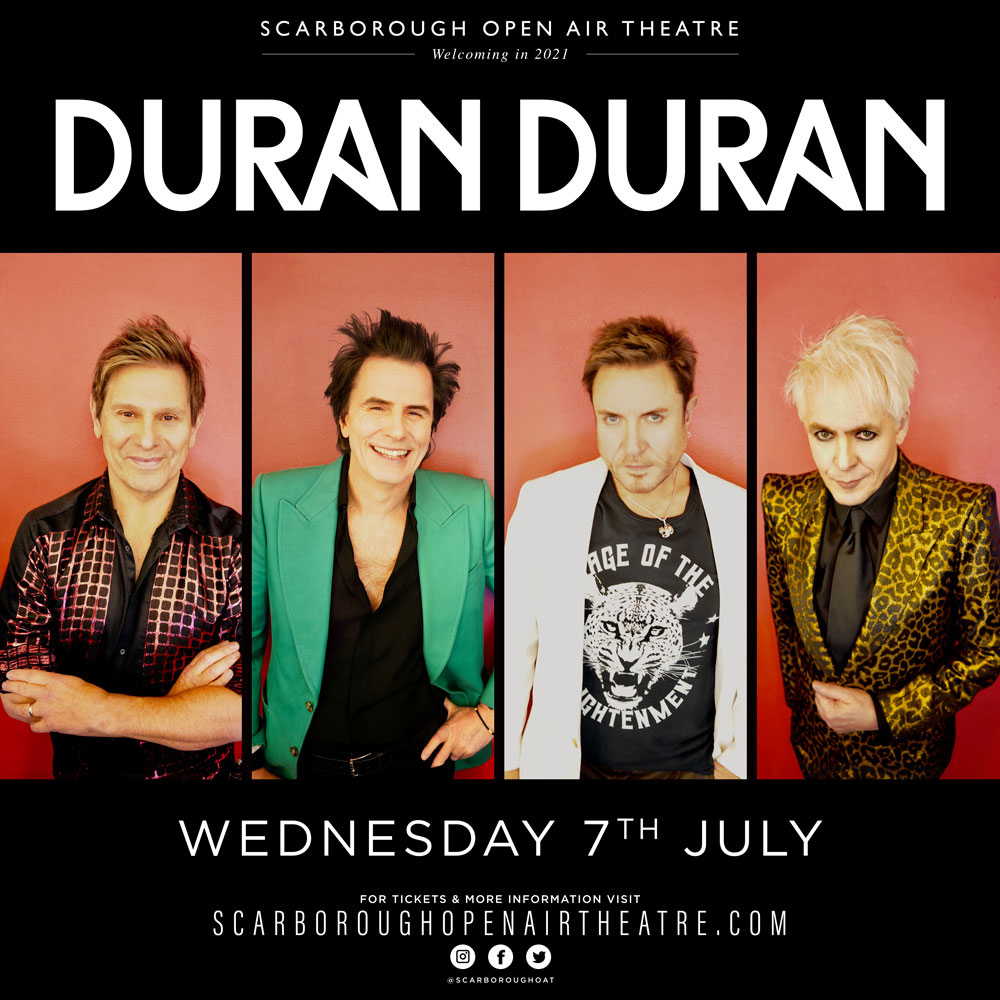 British music icons Duran Duran will delight fans next summer with a momentous outdoor show on the stunning Yorkshire coast.

Duran Duran have sold over 100 million records worldwide, scored 18 American hit singles and 21 UK Top 20 tunes, cementing them as one of the most successful and influential bands of all time.

Tickets go on general sale via scarboroughopenairtheatre.com at 9am on Friday November 6. Duran Duran VIP Fan Community members will have first access to tickets with a pre-sale beginning at 9am on Tuesday November 3 via www.duranduranmusic.com

Consistently fusing art, technology, fashion and a signature sense of style with their unique and infectious brand of music, the band has proven themselves timeless, always innovating and reinventing, to remain ahead of the curve.

Their latest album – 2015’s Paper Gods – was Duran Duran’s highest-charting release in 22 years and was hailed by critics and fans alike as their best body of work in more than two decades. Produced by Mark Ronson and Nile Rodgers, alongside Mr Hudson and Josh Blair, the record featured collaborations with Janelle Monáe, John Frusciante, Kiesza and Jonas Bjerre (of Mew.)

A global, three-year, sold-out arena tour followed where the band brilliantly combined such classics as Girls on Film, The Wild Boys, Ordinary World, The Reflex, Come Undone, (Reach Up For The) Sunrise and Rio with stunning new songs from Paper Gods.

The two-time Grammy, BRIT Award and Ivor Novello winners are currently working on their 15th studio album. It is due for release in 2021 when the band will continue their 40th anniversary celebrations with a number of major live shows and events – including headlining both the Isle of White Festival and Lytham Festival.

Their Scarborough Open Air Theatre show is presented by Cuffe and Taylor. Promoter Peter Taylor said: “Duran Duran are global superstars and we are so excited to be bringing them here to Scarborough next summer.

“Their live shows are simply epic and fans have been asking us for some time now to bring them here to the Yorkshire coast. It is another massive headline show for Scarborough OAT 2021!”

Previous Article
Listen to John on the 500 Podcast
Next Article
Nick’s 2020 Halloween Playlist (and it’s scary!)
News
Back to all news