Duran Duran is the final headliner for American Express presents BST Hyde Park 2020. One of the most iconic and ground-breaking bands to come out of the UK in the past four decades, Duran Duran will close this year’s BST Hyde Park in London’s greatest outdoor venue on Sunday 12th July. They are a group that defined a generation and continue to prove themselves timeless, always innovating and reinventing, while remaining ahead of the curve.

Duran Duran Fan Community members will have access to special tickets for the event that will include EARLY ENTRY! The member-only pre-sale, which includes early entry and packages, will take place on Thursday, March 12 at 10am local venue time. Information can be found on the pre-sale page at http://duranduranmusic.com.]

Duran Duran, comprised of singer Simon Le Bon, keyboardist Nick Rhodes, bassist John Taylor and drummer Roger Taylor, have sold over 100 million records, with 21 UK Top 20 hits and 18 US hit singles. Few bands have celebrated such huge global success and still hold major headlining status. This is their BST Hyde Park debut and their only London show for 2020, so a milestone in itself. Their much-lauded live shows blend the best of new songs and classics including “Hungry Like the Wolf,” “Pressure Off,” “Rio,” “Girls on Film,” “(Reach Up For The) Sunrise” and “A View to a Kill.”

Duran Duran’s last album, 2015’s Paper Gods, was the band’s highest-charting release in 22 years and was hailed by critics and fans alike as their best body of work in more than two decades. Produced by Mark Ronson and Nile Rodgers, alongside Mr Hudson and Josh Blair, the record features collaborations with Janelle Monáe, John Frusciante, Kiesza and Jonas Bjerre (of Mew.)

A global sold-out arena tour over three years followed, including their most recent appearance in London at the O2 Arena. They brought the world’s attention to Hyde Park in 2012 with a special live concert celebrating the start of the London 2012 Olympics. Duran Duran are currently in the studio working on their follow-up to Paper Gods with several collaborators, to be announced soon. This, their fifteenth studio album, is slated for release in late summer this year and Hyde Park could expect a much-anticipated glimpse of new live music.

"I look at film of The Rolling Stones at Hyde Park back in '69 and think of all the great acts who've performed there since. It really is an honour to add the name Duran Duran to that roster, and to play our music at one of the world's greatest inner city locations at BST Hyde Park." - Simon Le Bon

John Taylor says, "On July 16th, 1980 Duran Duran debuted its latest line-up at the Rum Runner club in Birmingham. Locals Nick Rhodes, John Taylor and Roger Taylor, were joined by a pair of new musical friends: Andy Taylor, who had come from Newcastle by train with only a suitcase, guitar and combo amplifier; and Simon Le Bon, from Middlesex, who had been attending drama classes at the University, and now found himself the frontman with a local band of futurist post-punkers.

He adds, “It’s almost unbelievable to us that forty years later we are celebrating this anniversary with a show at BST Hyde Park. Making it all the more special is the presence of our old friend and collaborator Nile Rodgers, and Gwen Stefani, a favourite gal pal of ours since No Doubt. It will be a special day for us, and, hopefully for our audience, who have followed us faithfully for so many years now. Please, come celebrate our long and storied journey!”

Gwen Stefani joins Duran Duran at Hyde Park as a UK exclusive for 2020. A multiple Grammy Award-winner, Stefani has achieved global success as a multi-platinum solo performer, songwriter, and the iconic frontwoman for rock band No Doubt.

The California born artist has sold more than 30 million records worldwide including her work with No Doubt and her four-times-platinum debut solo album Love.Angel.Music.Baby. — a 2004 sensation delivering the hit singles “Rich Girl,” “What You Waiting For?”, and the Pharrell Williams-produced No. 1 hit “Hollaback Girl.” With her 2006 album The Sweet Escape featuring UK top 10 single “Wind It Up,” Stefani released her third solo effort This Is What The Truth Feels Like in 2016 and most recently her first ever Christmas album You Make It Feel Like Christmas in 2017.

Known for her charismatic stage presence, Stefani premiered her exclusive Las Vegas headlining residency “Gwen Stefani – Just A Girl” in 2018. With its setlist comprised of fan favorites and iconic hits, the show unfolds as a visual marvel for fans, putting a fresh twist on classic Vegas theatrics. Now she’s bringing a taste of the spectacular to London for the first time ever!

The legendary Nile Rodgers will bring CHIC back to Hyde Park for first time in 5 years; he has played a formative role in Duran Duran’s career adding his production touch to seminal songs including “The Reflex” in 1983, “Wild Boys” in 1984 and “Notorious” in 1986 straight through to the band’s 2004 album Astronaut and 2015’s Paper Gods.

Among music legends, Nile Rodgers is truly exceptional. He amplifies his legacy as a multiple Grammy-winning composer, producer and guitarist by constantly traversing new musical terrain. As the co-founder of CHIC, and the newly elected Chairman of the Songwriters Hall of Fame, Rodgers pioneered a musical genre with hits like "Le Freak," and "Good Times". Nile Rodgers transcends all styles of music across every generation with a body of work that's garnered him an induction into both the Rock & Roll Hall of Fame and the Songwriters Hall of Fame.

American Express® Cardmembers can take advantage of the presale from 10am Tuesday 10 March until 9.30am Friday 13 March 2020. Visit axs.com/bstamexpresale to book. Terms and Conditions apply.

American Express presents BST Hyde Park 2020 is back for another year of unique shows and unforgettable music moments, for the 8th edition. It has become THE place to be in the London summer, a date in the diary for hundreds of thousands of fans every year.

Last year continued the tradition of must-see experiences that has seen The Rolling Stones return to Hyde Park, Carole King play her classic album Tapestry in full for the first time ever, comebacks for The Strokes and The Libertines and many more.

There was Celine Dion owning it, Stevie Wonder stunning with a greatest hits set, Barbra Streisand charming fans and critics alike in a rare show, Florence + The Machine bringing a host of female performers to their day as well as co-headliners The National and finally, Robbie Williams royally entertaining a sold out Hyde Park.

And of course, Open House will return, the FREE 4 day event between the two weekends of music, offering amazing events and activities for everyone - free vibrant live music & entertainment, sensational open-air cinema nights, live sport showings, street food, pop up bars and loads for the family too, including the delightful Chickenshed Children’s theatre.

Alongside bringing fans the superstar artists they deserve, is a real commitment to Accessibility, Community and Sustainability that American Express presents BST Hyde Park is very proud of and strives to improve year on year. 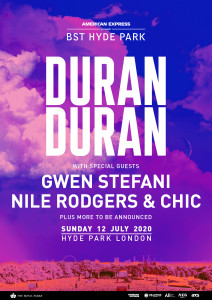 Previous Article
British Summer Time festival reveals final headliner
Next Article
Duran Duran’s A DIAMOND IN THE MIND to air on PBS!
News
Back to all news