Wow...released 35 years ago...to be honest it seems like another lifetime. An album that was recorded in what I call the 'eye of the storm'.

I can't even remember where and when these songs were captured live, but apparently it was 'recorded live around the world'. How they managed to record the shows, I do not know ..in those early days, as the stage curtain went up, the screaming from the audience was almost deafening, and often it was hard to hear what we were playing onstage...let alone in the audience and on the mixing desk. Incredible days of hysteria, all imposing fame, traveling & non-stop shows that had us reeling from the speed of our ascent from our humble beginnings in a Birmingham 'squat' in what seemed like a few moments.

We have never said we would change a thing...we wanted it and got it with two smoking barrels.

This was the beginning of the era where 'live' albums would be filtered through the studio mixing desk before release to make sure they were polished enough for the more and more discerning ears of the listening audience. It was thought that every 'wrinkle' in the sound should be ironed out to provide a smooth mix, which I always felt was detrimental to the live album, and I think ARENA suffered from this in some ways. However, the album went on to sell millions of copies and established us as one of the great live bands of the era..and produced one our career highlights, 'Wild Boys,' when it was suggested that we record a quick bonus track to help market the album. 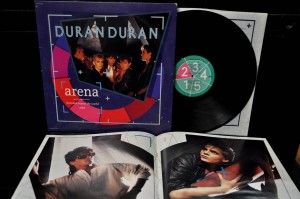