A life-long dream came true for South Tahoe High English teacher Bridey Heidel when she met Simon LeBon of Duran Duran on Friday night during their outdoor concert at Harveys. Not only did see meet him during a personal one-on-one back stage before the concert, she was also brought on stage for hugs, holding hands, a kiss on the cheek, and a song.

"I feel like I'm going to explode," said Bridey after meeting LeBon and waiting to go on stage. She had just spent time with him in the backstage sitting room, getting to chat with the lead singer and others.

"He is incredibly nice," said Bridey. "He was excited by the community energy and said they sold thousands of tickets because of the local connection."

Many have followed her journey to meet Duran Duran and lead singer Simon Le Bon. In August of 2015, we carried her story to gain the notice of comedienne Ellen DeGeneres so she could go to her show and meet Le Bon and the band.

Then in August we caught up with the beloved teacher after the Duran Duran concert in Lake Tahoe was announced and a new campaign was created to help he meet them.

She'd been close to meeting them before. When LeBon would sing "Hungry Like a Wolf" he'd ask the crowd, "Is anybody hungry?" Bridey created a sign that said "Yes" and it went with her to Duran Duran concerts. Simon called her out about the sign several years ago and that same sign went up on stage with her Friday.

Her journey hasn't been one of meeting a schoolgirl crush, its about meeting the people responsible for saving her.

"It is a massive thank you for saving me," said Bridey. "Actually saving my spirit, and even a time or two, my life. It’s a bit cliche, I know, but I think we all have that music that transports us—to good memories and to bad ones. I am sure they’ve heard this kind of thank you hundreds of times, but maybe it still matters to them to hear it again."

While under her mother's care, Heidel grew up in a "very, very violent home."

She said cops were a constant at the door and they moved about every six months. She attended 26 schools before coming to South Tahoe High where she graduated in 1989. Heidel put herself through college and returned to teach at her alma mater.

"The anchor that kept me steady were my Duran Duran records—really the only things that made every move with me," said Heidel. "They were the first things I grabbed as we moved—sometimes with very little notice—like a day or even just an hour."

"Duran’s music was the soundtrack of my young life, and I cranked up the volume so Simon’s voice would drown out the screaming from the other side of my bedroom door," Heidel said. "I wrote to him in my diary, telling him of my goals and dreams and what I would do with my life when I was able to create my own life and own home. I think it worked because I’ve done some good work with kids and created a beautiful, loving, and peaceful home."

Now that she has met Simon LeBon and Duran Duran, what is her next dream?

"I want to be the band whisperer," she said. "I'll be helping kids with their dreams." 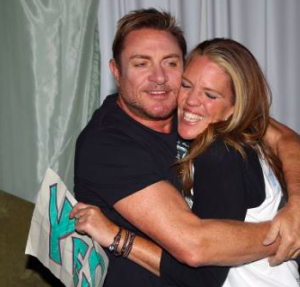