He was well known for his exploits aboard yachts in the 1980s – and today Duran Duran frontman Simon Le Bon sailed into Portsmouth as part of an initiative to give disadvantaged youngsters the chance to join a sailing expedition.

The singer joined teenagers from Tower Hamlets on the final leg of their journey from Cowes on the Isle of Wight. The youngsters had been taking part in the Tall Ships Youth Trust UK Sailing Challenge.

Simon said: ‘I’ve really enjoyed meeting the kids and taking part in the final leg of the challenge. A lot of the youngsters come from deprived backgrounds and are exposed to social problems such as high levels of knife crime. Many of them have never even been on holiday. This venture gives them the chance to get away from the banality of inner-city life. When many of them joined the boat on Monday they hardly spoke a word but after enduring stormy conditions and having to work as a team out at sea the kids really came out of their shell – it’s such a wonderful thing to see.’

Simon, who became an ambassador for the charity 18 months ago, knows from personal experience the benefits of sailing.

‘When I was 11, a local clergyman gave myself and five other children the opportunity to go sailing on the Norfolk Broads. He taught me the skills of sailing and it really changed my life. Being in charge of my own transport gave me a real sense of freedom. I’ve been a keen sailor ever since and am delighted to help this fantastic charity,’ he said.

The challenge sees six groups of 10 children complete relay stages circumnavigating the UK with the final leg sailing from Ipswich to Portsmouth. The youngsters are responsible for all aspects of sailing, from cooking and cleaning to setting the sails and taking the helm.

Aqeel Ahmed, 14, said: ‘This has been a once in a lifetime experience. I feel so much more confident and meeting Simon was brilliant.’

Habibah Taher, 15, added: ‘It has been a really good experience, even if I did get sea sick. I got to meet lots of new people.’

For the charity’s chief executive officer, Richard Leaman, the venture provides an opportunity to make a real difference to children’s lives.

‘Something magical happens out at sea – youngsters really come out of themselves. Our research shows, despite their challenges, 95 per cent of these kids will go on to further education and employment,’ he said.

Simon added: ‘The charity exists on the generosity of others and I would like thank all those who have supported us with their donations.’ 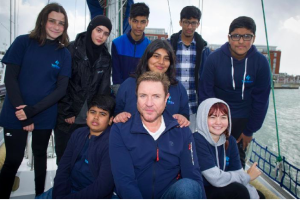