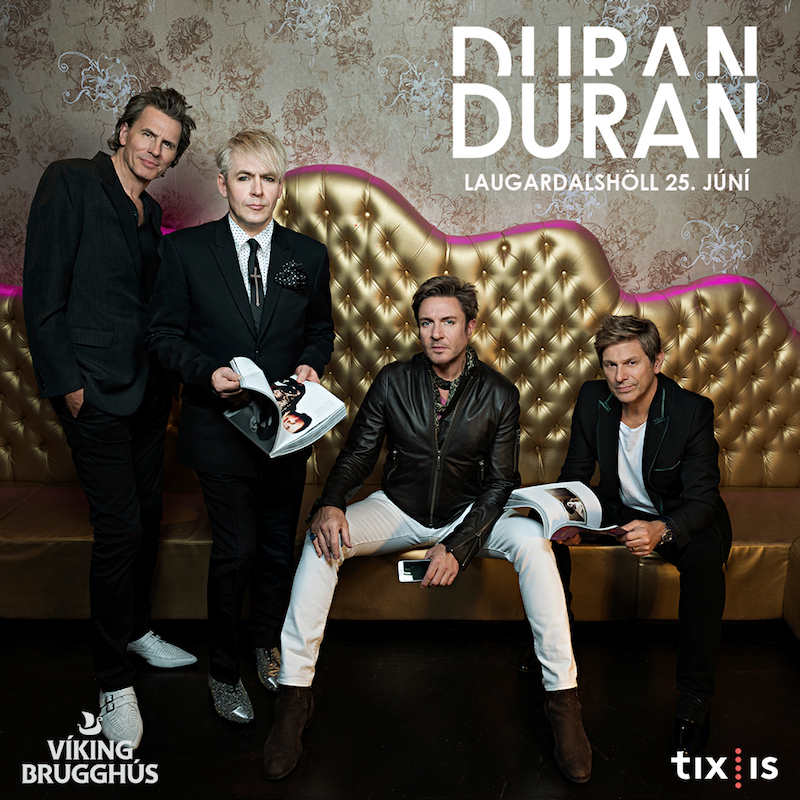 Reykjavik, April 16 - The iconic British rock band Duran Duran will be performing in the Laugardalshöll venue on June 25th in Reykjavik, Iceland. Pre-sale tickets for Duran Duran Fan Community members will begin at 9am on April 23rd followed by a pre-sale for Mono and Tix members starting an hour later at 10am. Tickets for the general public will go on sale on April 24th at 10 am local time here.

This very special performance will see the band returning to Iceland for their first show in the country in fourteen years. To the delight of their many fans, Duran Duran plan to present another memorable live show comprising material from across their extraordinary career.

Simon Le Bon predicts, “If the show Duran Duran played in Iceland in 2005 is anything to go by, our show on June the 25th at Laugardalshöll is set to be a magnificent celebration - a blowout! I look forward to staying up all night like I did last time.”

Duran Duran is without a doubt one of the most iconic bands in modern music history. Their career spans four decades, during which they have sold over 100 million records, won two Grammys, two Brit Awards, seven Lifetime Achievement Awards, as well as, numerous other accolades. They rose to fame quickly and became a household name, seemingly overnight, but have proven themselves timeless, defying the odds by outlasting their contemporaries and never losing the desire to innovate. Their approach—a fusion of art, fashion, technology, and pop—has always been far ahead of its time, and the band shows no signs of slowing down.

In between a number of select live shows this year, the band have already started work on their next studio album, together with a series of very special projects celebrating their 40 years together

Only tickets sold through Tix.is are valid.

Previous Article
6 West Coast Dates in September!
Next Article
Kaaboo Cayman Photos by Elliot Taylor
News
Back to all news