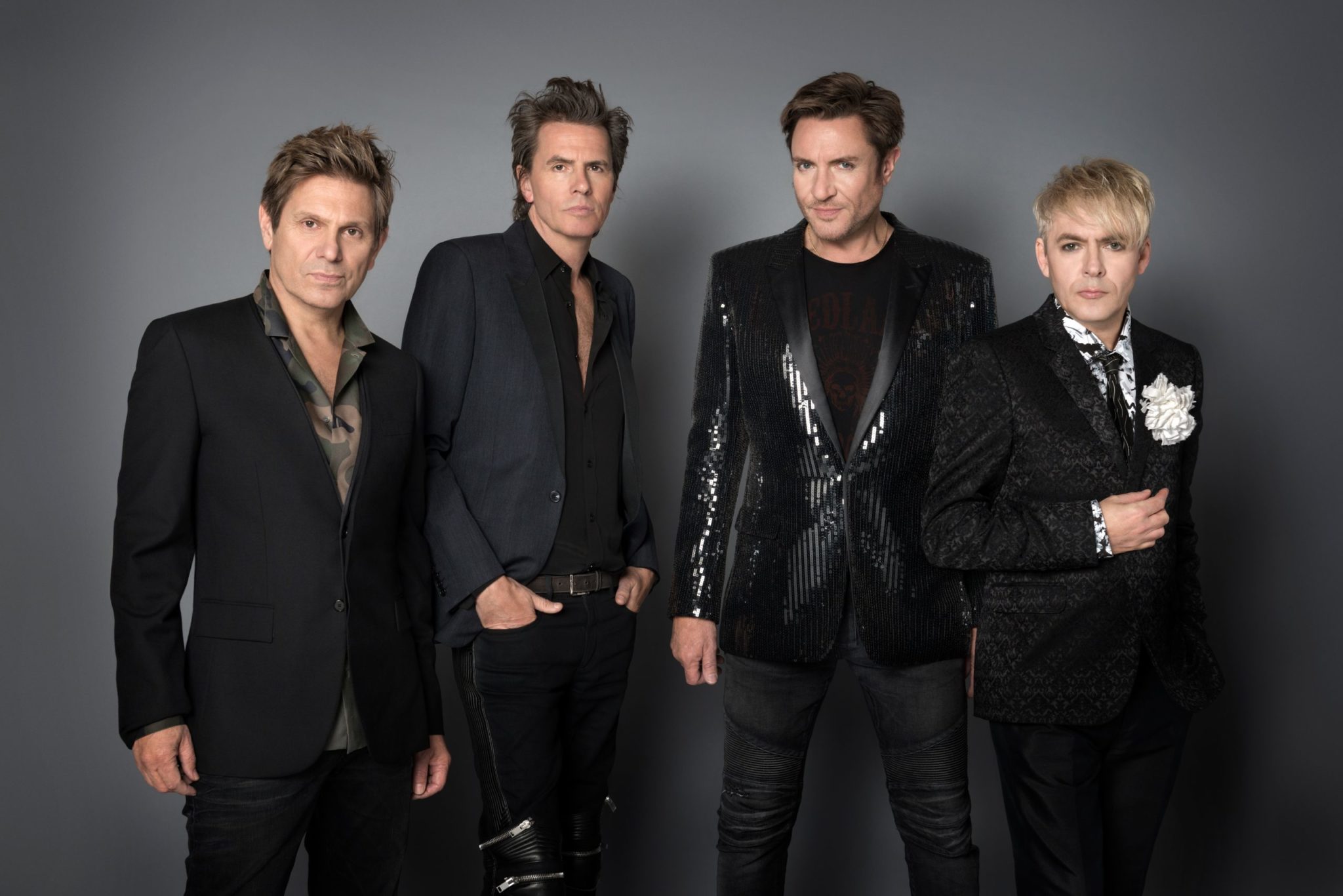 Aston Villa getting back into the premiership! I went with the kids to the game at Wembley and it was an amazing day. We had no real expectation of the team getting through, and we did it after quite a few years of languishing.

I re-visited the movie “Apollo 13” after we did the NASA event and I really loved seeing it again. It was so well done. I also loved “Rocketman,” the Elton John movie. It got me back into Elton.

“When They See Us Now” on Netflix. It captivated me, and I didn’t have any recollection of the event. The series was great and I highly recommended it.

My old friend Mark Ronson’s “Late Night Feelings.” He seems to always be able to reinvigorate music and his own career. He is so talented. Because of the movie mentioned above, I got really in to Elton John’s music. I didn’t “get” him when I was younger and this made me appreciate his music.

Playing in Cape Canaveral was incredible, and what an incredible moment the moon landing was, so to play on the anniversary among the rockets was quite something. We had very little rehearsal time, we turned up the night before with a full string section, and rehearsed for two hours and somehow got it all together. It looked and sounded incredible.

My other moment was being back in the Studio with Mark, Erol Alkan and Giorgio Moroder; that was great. We are hoping to be finished with the album by March, and we’d love to have something out before the Isle of Wight fest. We have an incentive!

Releasing the album. The shows, of course, I am excited to play the Isle of Wight Festival, such great acts have proceeded us – Jimi Hendrix, Fleetwood Mac and more. It has been a long time coming for us to play in the UK, and this is a great place to start.

“Once Upon a Time in Hollywood.”

I found it thrilling. I loved the music, it had a tremendous score, very tender, very funny, great performances. I liked this film a lot more than Q’s quirkier stuff.

“The Crown” has changed the way I think about the Royal Family in a major, major way. It looks so good, it sounds so good, the acting is so good.

BUT on the other end of the scale,“Chernobyl” was amazing! And – oh my god – so was “Top Boy,” a British crime drama and I also liked the HBO show “Euphoria.” Lastly, I couldn’t get enough of “Succession.”

So much of the creative energy is in long form TV right now.

It’s all about Lizzo this year. She was on a different level than anyone else. I can’t remember the last album that gave me as much joy as her album. It’s so great, it’s so much fun. Enjoy her now!

The book I thought was the most extraordinary was MILKMAN by Anna Burns. I just thought it was so moving, different and fresh.

Simon celebrated his 60th birthday with an extravaganza in Ibiza. I don’t do a lot of stuff like that, but he organized a boat trip, which we all took, and it was an amazing, amazing experience. I’ve had some good moments over the years, but wow.

Well, I don’t know if I am going to get it, but I’d like to see freedom from deadlock in both the States and the UK. The political deadlock is so insane. I don’t know how either country gets out of it. Both countries need someone amazing to come along. I feel like the UK deserves more than what’s on offer. I’d like people to start coming together. People are so divided, and people are so emphatic in their division.

My 60th birthday bash with family and close friends. We had lovely dinners, my girls sang to me and on the last day we got on a boat with a disco and danced-danced-danced.

I really enjoyed “Once Upon a Time in Hollywood.” It had a bit of a contentious ending, since there were liberties taken, which made me cry at the end. I liked Kenneth Branagh’s “All Is True,” which imagines Shakespeare’s retirement. I saw “The Hummingbird Project,” with Salma Hayek and Jesse Eisenberg. It was funny, beautiful and sad.

“Chernobyl,” hands down, 100%, the best of the year, closely followed by “Giri/Haji,” about a Tokyo detective sent to London. I will say that I was very disappointed by the end of “Game of Thrones,” , I found it very unsatisfying. I liked “Russian Doll,” really enjoyed that, and so did you, Katy.

You know what is great also? A BBC podcast called “The Missing Crypto Queen” about a woman who fronted a crypto currency that turned out to be a Ponzi scheme.

I am currently reading “MILKMAN,” by Anna Burns, which I am well-into. There’s a book called “The Stopping Places” that I really loved too . Damian Le Bas, he is a fantastic writer and it’s so beautifully written. It will make you a better person by reading it. Oh, also, the Audible original “West Cork” was rather good.

I’ve been in the studio a lot this year, so I haven’t been listening to a lot but I have revisited Amy Winehouse. Something she does with her vibrato brightens the music a little bit. I listened to “Valerie” on the way home today.

Playing at NASA, the choir and the Drones up in the sky. We also had special, special treatment while we were there, it was really nice seeing the behind-the-scenes stuff.

We have a great big show coming up at the Isle of Wight on June 14. That Sunday night we are headlining. And that’s what I am looking forward to!

The 50th Anniversary of the moon landing. I remember being a little kid and watching this on tv and it was just spectacular, magical and otherworldly. It had a massive impact on how I thought about life. It seems a little bizarre, and rather wonderful, that after 50 years that it is still such a significant achievement.

From what I’ve seen so far, the Tarantino movie “Once Upon a Time in Hollywood” is really one of his masterpieces. There wasn’t a minute I didn’t enjoy. The craziness of his style, and the dialogue, transports you to a different world. Leonardo and Brad, I’ve never seen either of them better.

This year’s been a bit of a revelation for me. I don’t watch much TV aside from News or a Documentary, I decided I was out of step with the world since everyone seems to watch fabulous programming on Netflix and Amazon, Apple TV, etc. “Black Mirror” remains one of my favourites.

“The Crown” is glorious. The casting is really spot-on. Everyone plays their part so immaculately, it’s a joy to watch. The dialogue is the best written for a drama that I’ve heard in many, many years. It’s like modern day Billy Wilder.

I love the books by a rather wonderful photographer called Stephen Gill. He releases many books and this years is called “The Pillar.” It’s exquisite. The design, the paper, the concept, the photos, it has a magic to it. Stephen is extraordinarily talented.

It was Billie Eilish this year. I think she’s the most amazing young talent, and very young! A big talent to emerge out of the music world in a long time. She is darkly clever and is more interesting than anything else I’ve heard. I also like Lizzo, she has a proper diva voice.

My favourite things, every year, are the art gallery shows that I try to see wherever I am. I saw some great things, as ever. The Stanley Kubrick exhibit at the London Design Museum was really good. I am a massive fan. Reading the letters back and forth between he and Nabokov, was a revelation.

I went to Paris earlier in the year and I saw a Ren Hang exhibition at the Maison Européenne de la Photographie . He created a language of his own, which is being carried on by Chinese photographers.

On the other end of the spectrum, I was in Milan for a few days and I went to see Leonardo DiVinci’s “The Last Supper.” You really have to make the time to digest this. It was not a let-down. I really enjoyed ticking that box and looking at it for the limited period you have. It is strange seeing something that has been reproduced so many times in person.

For me, of course, there is no possible question: it was when we played at the Kennedy Space Center in July to celebrate the anniversary of the Apollo 11 moon walk. I’ve never done something more surreal. Being there at the very site where they launched the Apollo 11 rocket, in the Rocket Garden, surrounded by these man-made creations.

The full moon, the drones by Studio Drift that danced like birds above us, the chorus… It seemed like it would be impossible, but somehow, we pulled it off. For me, it was my favourite Duran Duran moment of this year but also one of my favourites of my entire career.

I am always excited by what we’re working on. Most of this year has been spent on a Duran Duran album! We worked with Mark Ronson, Erol Alkan and Giorgio Moroder, which was something so special to us. He’s a true master. He didn’t get four Oscars for soundtracks for nothing! That was another highlight of this year 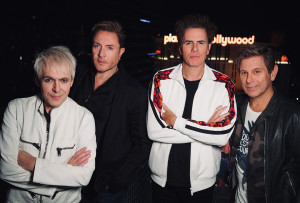 Previous Article
Duran Duran: More mature, but still hungry like the wolf
Next Article
December 2019 D Blast
News
Back to all news