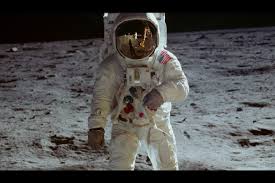 It’s 2019, which means the iconic moments of 1969 are reaching their 50th anniversaries this year. In some cases, commemorating those moments is not going so well (see: Woodstock 50). Here’s hoping — and expecting — that the official moon landing celebration will fare better.

Kennedy Space Center is celebrating 50 years since Apollo 11’s historic mission by throwing a concert. Somewhat surprisingly, the headliners for that concert will not be a space-rock band, or someone who was popular in the summer of ’69, or “Summer Of ’69” singer Bryan Adams. And I guess they couldn’t get R.E.M. back together for a run through “Man On The Moon.”

Instead, ’80s new wave pop idols Duran Duran will blast off in the Rocket Garden at Kennedy Space Center Visitor Complex following an opening set from DJ Evalicious. Duran Duran’s concert will be accompanied by a drone art performance by Studio Drift. I guess Duran Duran’s first single was “Planet Earth” so that’s at least a little bit space-oriented, but if they were going to run with a connection that tenuous they might as well have gotten Vampire Weekend: One small “Step” for man, one giant leap for mankind. Or, like, Jeff Tweedy had breakfast with Neil Armstrong, I’m told. (Please let us know if you have any better ideas.)

Tickets cost $300, which graciously includes the cost of parking; some of those proceeds will benefit the STEAM education programs of the non-profit Aldrin Family Foundation.

So… do you think Simon Le Bon will moonwalk?