Few current artists, even in today’s Instagram-obsessed era, dress as fabulously as Duran Duran themselves. The new wave icons were at the forefront of the late ‘70s/early ‘80s fashion-focused New Romantic movement, and they developed their early style in the legendary dance club that gave the band its start, Birmingham, England’s Rum Runner. And they’ve been pop’s best-dressed boys on film ever since.

In honor of Duran Duran Appreciation Day (yes, that’s a real holiday, look it up), we asked Duran Duran bassist John Taylor to give us some weekend party inspo and share the stylish stories behind some of Duran Duran’s most iconic looks.

“It was this confluence of post-punk people, looking to experiment, to define themselves, to identify themselves through music and clothes,” Taylor tells Yahoo Entertainment, recalling the Rum Runner scene that had such an effect on his early style sense. “I loved walking in there and seeing the way kids were dressing, the way they were bleaching their hair, sweeping their hair back, wearing '40s suits and cocktail dresses and heels. It was very vintage-oriented, but there was also a modern, futurist thing going on. And the soundtrack was the beginning of electro — the end of punk, the end of glam. It was the first time I ever heard Kraftwerk or Japan in a nightclub, and it had a tremendous energy to it. And I think that for me, that’s why clothes and music are always going to be connected.” 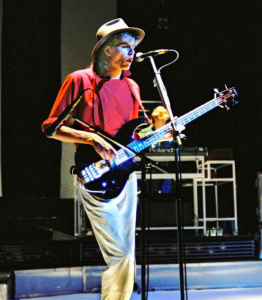 Previous Article
Duran Duran Appreciation Day, 2019
Next Article
Move over, Muse! Duran Duran to fly 300 drones above NASA while performing for astronauts at moon landing anniversary gig
News
Back to all news