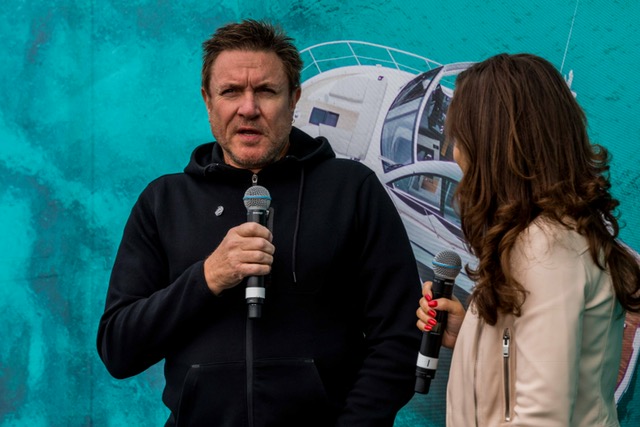 Sunseeker is delighted to announce that lead singer of iconic British band Duran Duran, Simon Le Bon, will be the special guest at this year’s 50th anniversary show starting on Friday September 14.

Simon, a long-serving ambassador of The Blue Marine Foundation (BLUE), will be officially opening the Sunseeker stand and BLUE exhibition space. Sunseeker will be showcasing its commitment to marine conservation at Southampton Boat Show with an immersive exhibition experience that will demonstrate the importance of protecting the marine environment for future generations.

The exhibition, which is located on the stand, will highlight the problems we currently face globally, with increased pressure from unregulated fishing, tourism and pollution.

Since 2017, Sunseeker has partnered with BLUE and has recently launched its first campaign titled ‘Project Menorca’, an exciting marine conservation programme that will focus on improving and protecting the island’s marine environment.

Simon, who will arrive at the show, on board a Sunseeker yacht, is extremely passionate about raising awareness of the damaging effects that overfishing and the destruction of biodiversity can have on the world’s oceans, and took part in the Whitbread Round the World Race in 1985. Since becoming an ambassador for BLUE, Simon has launched fundraising initiatives, including a charity bike ride from London to Monaco, spoken on behalf of the charity at several events and carried out interviews highlighting the work of the charity.

Simon commented: “The sea is a beautiful thing. We all grew up thinking it was perfect, pristine, and it would always stay that way. However, now we’re starting to see the reality of humanity’s impact on the world’s waters. It is a disaster unfolding before our eyes.

“If we want to preserve the living seas, we have a lot of work to do and it heartens me to see brands like Sunseeker working really hard to raise awareness and implement projects that will help us in our endeavour.”

For more information on Sunseeker’s partnership with BLUE, its launch of ‘Project Menorca’ and how you can help the cause, visit: www.sunseeker.com/blue.