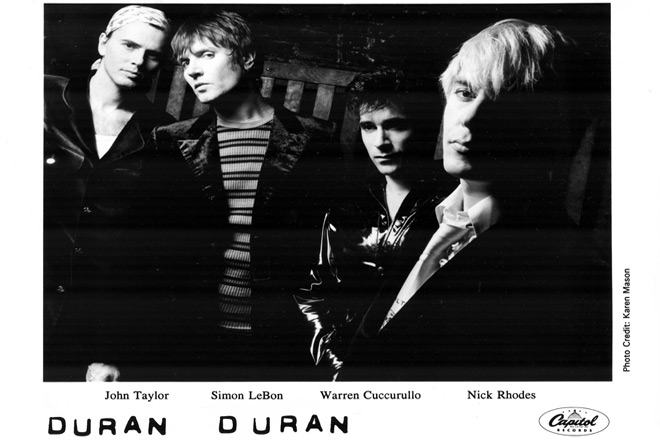 In the 1990s, enthusiasts of New Wave music—the genre illuminated by the commercial spotlight in the decade that preceded it—lamented the shifting of the lenses’ focus onto Grunge, among other edgier and heavier styles of Alternative Rock music. Unfortunately the style shift sideswiped the majority of the New Wave forerunners of the 1980, relegating many into the fringes of the scene, leaving only a few resilient ones to soldier on and continue to wave the genre’s flag. Among these brave bands that continued to wear on their sleeves their New Romantic hearts was Duran Duran.

Formed in 1978, in Birmingham, England, Duran Duran was one of those in the genre that remained consistently prolific during the tough, Hard Rock–oriented ’90s, alongside The Cure (“Friday, I’m in Love”), Depeche Mode (“Walking in My Shoes”), Simple Minds (“See the Lights”), and U2 (“Stay [Faraway, So Close!]”). And amidst the angst-ridden undercurrent of the decade’s music scene, the “Wild Boys” of the New Wave era were able to nudge themselves back once again onto the limelight, with their 1993’s self-titled offering, known also as ‘The Wedding Album.’

Released on February 11, 1993, ‘The Wedding Album’ is Duran Duran’s seventh studio full-length. It soared swiftly onto the charts that were dominated by the likes of Nirvana (“All Apologies”), Pearl Jam (“Daughter”), and Radiohead (“Creep”), which were commercial media’s toasts of the time. Reaching number four in the U.K. Albums Chart, it effectively highlighted Duran Duran’s trademark New Wave / Dance Rock sensibilities, New Romantic lyricism, and idealistic sentiments in contrast to all the hate, cynicism, and apathy of many of their Alternative Rock counterparts in that period.

‘The Wedding Album’ opened with the upbeat, jangly, and guitar-heavy “Too Much Information,” which articulated the natural and understandable reaction of the remaining members of the band to the intensifying air of ruthless and fierce competition in the music industry. This was immediately followed by the wistful “Ordinary World,” which became a phenomenal hit and regarded by many fans as the second of Duran Duran’s trilogy of greatest ballads; the other two being 1982’s “Save a Prayer” and 2000’s “Someone Else Not Me.” In it the listener most likely did not fail to hear the comforting keyboard melodies of Nick Rhodes; the rolling but restrained basslines of John Taylor; the sharp and stellar guitar works of Missing Persons’ Warren Cuccurullo, who was the band’s guitar player at that time; and most importantly, the pained and soulful voice of Simon LeBon. What has happened to it all? / Crazy some would say / Where is the life that I recognize? / Gone away.

The R&B/Trip-Hop-flavored “Love Voodoo” then undulated its way with its funky groove, swelling synth, and Disco beat. This paved the rhythm to the ensuing “Drowning Man,” returning the listener to Duran Duran’s territory of old…where else but the neon-lit, rummy-runny dancefloor. A short prelude of “Shotgun” loops and then Duran Duran launched into the album’s other successful and chart-topping track, the sensuous and sexy midtempo “Come Undone.” Mine, immaculate dream made breath and skin / I’ve been waiting for you….

“Breathe After Breathe” displayed Duran Duran’s excursion to progressive music, in particular, Worldbeat with a glaze of Samba, owing to the song’s being a collaborative composition with the Brazilian singer-songwriter and guitarist Milton Nascimento, who also sang in duet with LeBon. Another foray in Funk Pop came next in the form of “UMF,” which may remind the initiated similarly styled songs by the likes of Michael Jackson (“Wanna Be Startin’ Somethin’”) and Prince (“Kiss”).

After a rocking version of The Velvet Underground’s “Femme Fatale,” the album led the listener back to the dizzying discotheque with “None of the Above”; it predated the Dance Pop sensibilities of the then flourishing teen-oriented vocal groups like Backstreet Boys (“Everybody [Backstreet’s Back]”) and ’N SYNC (“Bye Bye Bye”).

“Shelter” was a subtle throwback to the cinematic vibe and soulful swagger of Duran Duran’s James Bond song, “A View to a Kill.” The penultimate track, “To Whom It May Concern” was an uptempo Pop Rock ballad akin to the likes of Mr. Mister’s “Kyrie,” Vitamin Z’s “Every Time that I See You,” Two Minds Crack’s “The Hunger and the Greed,” and Cutting Crew’s “Everything but My Pride.”

‘The Wedding Album’ concluded with the funk, clap, groove, rap, beat, and rhythm of the Old-School Hip-Hop–inspired seven-minute closer “The Sin of the City,” foreshadowing many of the band’s songs in its latter albums. Finally, Duran Duran adorned the album’s cover art with wedding photos of their respective parents. Sweet.

Duran Duran flew sky high during the pinnacle of New Wave music in the mid-’80s and dwindled for a bit, in a commercial perspective, as the decade came to its end. However, by a streak of luck, or better yet because of the remaining members’ determination, passion, and esprit de corps at a time when they must have felt that the music industry had suddenly turned its back on them: Crazy some would say / Where is my friend when I need you most? Gone away…

LeBon, Rhodes, John Taylor, and Cuccurullo were able to weave an album that had put the name of their band back to where it truly belonged… in the pantheon of New Wave greats.

Duran Duran has to this day remained ubiquitous and relevant, and its music more and more influential and continue to be recognized by many younger bands of the current generation. In fact, only in 2015, the iconic band has released its fourteenth album. In the meantime though, revisit your own album of throwback photographs as you spin ‘The Wedding Album’ and celebrate with the paper gods the silver anniversary of the songs that kept them from ever falling apart.

Previous Article
Nick on the Death of Designer Judy Blame
Next Article
Tribute: Celebrating 25 Years of Duran Duran’s ‘Duran Duran’ (a.k.a. ‘The Wedding Album’)
News
Back to all news