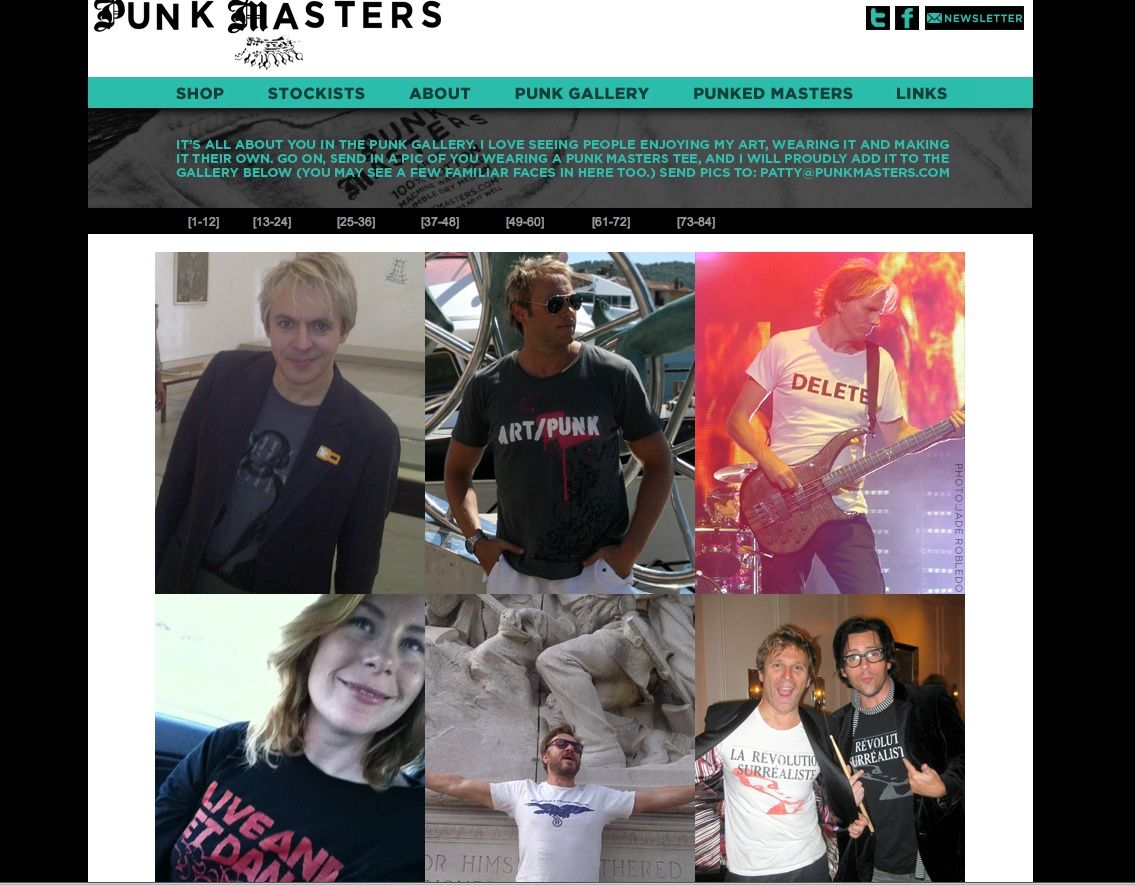 Who doesn't know Patty? If you're a fan of the band, chances are you do. She's helped design a lot of awesome DD things you've seen around for oh, maybe the last 15 years! She worked with John early on with B5, and on Juicy Mens etc etc AND she launched her own totally amazing tee shirt line, Punk Masters. As her newest set goes on sale, here's an excerpt from her fan community Q&A!

When you were high school or college, did you ever design tee shirts for you and your friends, or not so much?

The first time I had the opportunity to try screen printing was in a graphic arts class in the 9th grade where I printed my first tee shirt. Other than that I didn’t really do anything until right after college in 1994 when a friend and I decided to start our own little tee shirt line. We designed everything and worked with a printer to produce them (as I just had a very rudimentary screen printing set up.) We called our company “Orbit” (I can’t remember why we chose that name!) and sold our shirts to small local boutiques as well as a few festivals in the summertime.

A little birdie told us one of your first professional gigs was designing tees for Neurotic Outsiders. True?

Yes! What a fun job that was! It was in 1995 right after I had designed the logo for John’s record label, B5, he asked me if I’d like to design a logo/tee shirt for his band... his band being Neurotic Boy Outsiders. I ended up designing a few different shirts for them (and then modified some of the designs as they eventually dropped the ‘Boy’ from the band name.) 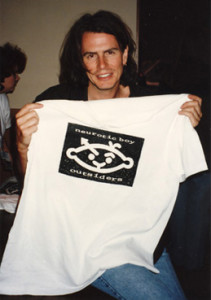 Why the name Punk Masters?

When I was working on my first line of tees, I was also designing my own greeting cards that I gave to friends and family on birthdays, anniversaries, etc. The concept was I would take a panting from a great master (Raphael, Jan van Eyk, Hans Holbein, Anthony Van Dyck, etc) and then “punk” it up playing with the colors, adding bright colored spray paint, adding pop art textures, etc. I had made one in particular for John and Gela’s wedding anniversary using a Thomas Gainsborough painting, and when John saw it he said it was like a punk master. And that was the “ah ha!” moment as I was still figuring out the name for my tee line, and the aesthetic of those cards were very much in line with the designs I was doing for the tees. Thanks, John! 😉

John seemed way more involved in this line than the others. Tell us how he added to the collection?

I’m very fortunate to have someone as supportive as John to bounce ideas off of and get feedback and advice, and it’s a two way street as I think he also like to exercise his art and design side. With this latest line I consulted with him a lot as I felt a little “stuck” creatively. He had me re-thinking some of the designs, which I ended up scrapping, and came up with better, stronger ones. He also helped me to think of it as an entire collection, where each piece is different yet they all sort of go together. Plus, he gave me two of my favorite logos in the collection: when he was in the UK one day he texted me saying he was thinking about logos combining DD and Bowie titles, then he texts me, “hunky dory like the wolf”. We were both like, YES! With the other one, John showed me this very cool Russian typographic design from the early 1900s, and thought the phrase “music and revolution” would work perfectly in that style... well, he was right!

Also, I had the idea to put together a couple of promo videos to post on social media for when I launched my new line. One day at John’s he was playing some music he had just created (he’s always toying around playing and creating music!), and I mentioned that it would make a great soundtrack for the promo videos I was going to put together. And just like that he told me to hit the record button while he played me a few ideas to work with!

Have any Duran Duran songs (beside “Hungry”) inspired part or all of the collection?

I’ve used a lot of song titles and lyric snippets from various artists over the years, but “hunky dory like the wolf” is actually the first time I’ve used a DD song (outside of the custom “Hungry” tee I did for JT and SLB.) However, as a long time DD fan, they are always a constant inspiration throughout my work.

Where can we get one of your totally rad tees btw?