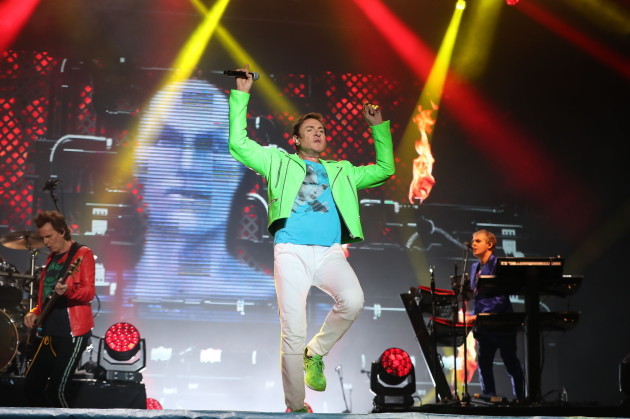 It’s always a sad state of affairs when your once snaked- hipped idols turn into bloated dead beats – the crypt keepers of your past. Can teen dreams ever transform into a reality? From the screams that greet the Bohemian Rhapsody-style visuals, Duran Duran attempt to put that to the test.

Worryingly, it initially looks like we’ve got Normo le Bon in a nondescript leather jacket and sensible slacks but then the lights flash on to reveal the coat in question is a patriotic green. As the full line up troops onstage, things are still perfectly in their right place, just like we left them with Nick Rhodes in a sapphire shoulder-padded frock coat hunched over the keys observing the crowd like a gin-swigging Joan Collins. Heartthrob John Taylor then takes to the slap bass bringing Stradbally back to the Top of the Pops studio and Blu-Tacked posters with a pumped up Wild Boys. A View to a Kill follows closely with the screens a-blaze with red stilettos and Bond silhouettes.

After a weekend of bizarre-low par Lidl nostalgia for a too recent past, Duran Duran breeze in – a stylish cruise ship with all crew members remarkably tight in the face and the crotch. Notorious blitzes into life the full Nile Rogers production thrumming into the open air, making sure there’s definitely no monkey business.

They then send the surging crowd spiralling through a wormhole to times spent in the backseat of parents cars with the melancholy hymn to survival, Ordinary World.
Ultimately though the Duran boys are a pop act completely comfortable with the blatant exploitation of the 1980s. Their videos were always flooded with barely clothed models while they preened in front of the camera, which is why the soft-core bop of Girls on Film is such a joy with the band fully aware that they are still the ones actually being objectified.

This is only reinforced as Simon Le Bon slowly introduces every member of the band, doing an almost vocal strip tease until finally razor cheek-boned glamour boy John Taylor gets his moment in the spotlight to white-noise piercing screams.

Having been around the block a few lifetimes, they understand implicitly what the crowd wants and don’t make you feel ashamed for those halcyon adolescent desires.
As the bewitching tropical coo of Save a Prayer bleeds into an unforgettable rendition of Rio (replete with the iconic album visuals) it could only be the bitterly cynical whose hearts wouldn’t be flooded with the dizzy thrill of these pop songs.

These seemingly inconsequential chart hits are the foundations of memories, of weddings, birthdays, parties, of celebrating living life to the full. They are not just the misty dreams of our youth, they are the soundtracks of our lives – a glorious reality shared under the starry sky for one night only.