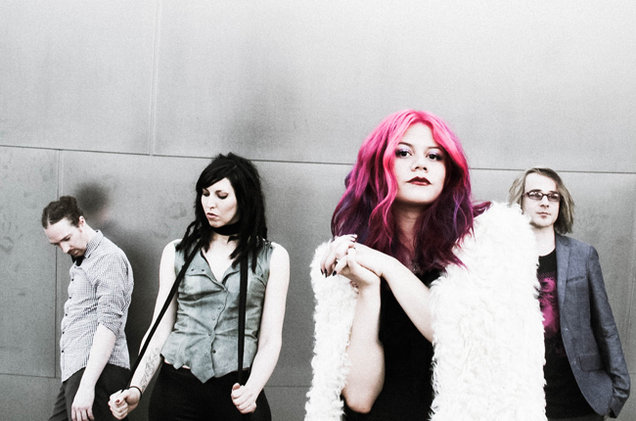 We excerpt some of our Fan Community Q&A's on the duranduran.com website each month - here's some of our recent chat with Allison and Matthew from Halo Circus:

So, Halo Circus…who are all of you?

Hello, my name is Allison Iraheta and I am the lead singer and main writer of the band. Matthew Hager is the bassist, keyboardist and writer in the band, who, before Halo Circus, was a multi platinum music producer. Veronica Bellino is our incredible drummer that has played with Jeff Beck and DMC of Run DMC, and Brian Stead is the guitarist and sonic guru of the band.

What year did Halo Circus get together?

We started writing for my second solo album in 2012. Within a few months it became apparent that the material we were writing felt like a band. Halo circus got together in 2013 and we debuted the band for the first time at the Troubadour.

Of course Allison, we have to ask – what was the Idol Finale like (and tell us a little bit about your experience on Season #8)?

It was incredible, scary, fun,and exhausting. haha. There were a lot of rehearsals and changes at the last minute, which is normal. Seeing everyone was amazing. All of us on season 8 got along so well, so when I saw Danny and Kris again, it was like seeing family I hadn't seen for a very long time. Also seeing the other Idols and meeting them for the first time made me realize how much of an affect this show had on all of us...it changed so many lives... The finale was a blast, and a perfect way to say goodbye to that part of my life. I was 16 years old when I was on Idol, so it was kind of like a big high school reunion for me.

Matthew, you’ve worked with John. What have you done together?

In the late 90's we wrote a lot and I produced a handful of his solo albums. My favorite songs that we did together from around that time would have to be "6000 Miles" and "Immortal." It was a really creative time for both of us. I don't know if many people know this or not, but a lot of those records were recorded at Scott Weiland's studio. He was a big Duran Duran fan. I think he let us use the studio just so he could meet John. I also had a lot of fun working on Red Carpet Massacre.

Most people became familiar with Halo Circus after hearing your cover of “Do You Believe in Shame.” How did that come about?

We were asked to be on the Duran Duran tribute album, Making Patterns Rhyme, and of course leapt at the chance to contribute. Matthew had actually been wanting us to do a version of this song because of its captivating lyrics and melody, so when the opportunity came up we knew exactly what song we were going to do and were honored to do it.

What’s next for Halo Circus?

We are about to release our debut album, BUNNY, on June 24th and are starting a pretty cool and unique pre-order on HaloCircus.com. Many Duran fans know Patty Palazzo, who did a beautiful job designing all the artwork for the album, and all the photography was shot by the great Nick Egan. I'm really excited to share it with everyone. It's kind of a return to the album format, which seems to be missing in today's musical landscape. We will soon be leaving for our very first US summer tour!! We had no way of getting on the road so we asked our fans for help and they crowdfunded an entire 30 City US tour called The Follow The Rabbit 2016 US Tour.

Previous Article
Dance into the fire: A close look at Duran Duran’s low-key red-hot tour of the summer
Next Article
Duran Duran Says No to Nostalgia with Paper Gods
News
Back to all news