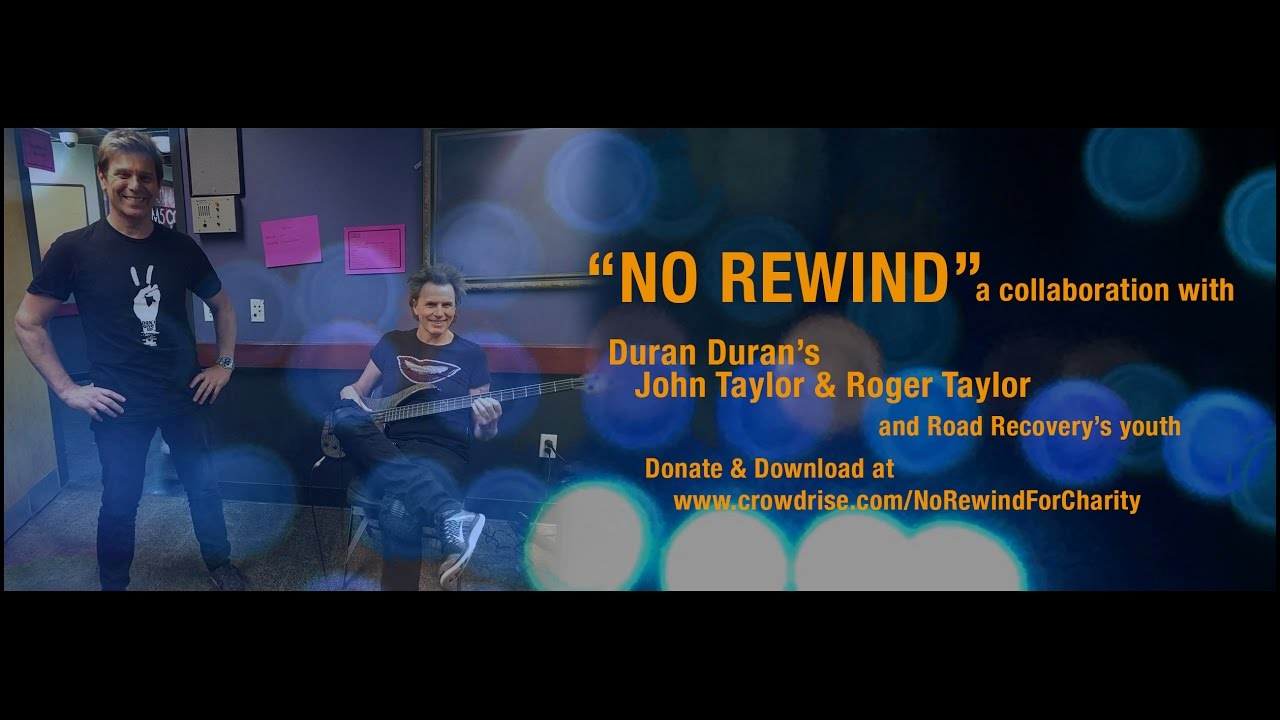 "Road Recovery offers a safe, drug and alcohol-free place for young people to learn and work, and with professional guidance, introduces them to all aspects of the music business - from songwriting and performance, to the delivery of their music to fans, either live or via recordings," says John Taylor. "'No Rewind' itself says a lot about Road Recovery's work and philosophy. Lyrically and thematically, it's an expression of the real concerns of sober kids."

In between Duran Duran's New York City-area stops on the band's tour in support of their most recent album Paper Gods, John Taylor and Roger Taylor took time out to work with youth from Road Recovery's RecoveryTrax program, meeting backstage and rolling up their sleeves at Threshold Recording Studios NYC, home to the charity's youth programs. Over the past nine months, Road Recovery's youth exchanged demo recordings and sonic ideas with John and Roger. The result, "No Rewind," is an original, energetic, dance-rock tinged song that was produced, mixed, and arranged by the band members, along with Duran Duran producer/engineer Joshua Blair.

Through Road Recovery's CrowdRise website, music fans have an opportunity to make tax-deductible donations of $10 dollars or more, in exchange for this exclusive track, unavailable elsewhere. For larger donations, Duran Duran are generously making a number of gifts available including DVDs, posters, and signed promotional materials from the Paper Gods tour. A Grand Prize of a Duran Duran meet & greet will be awarded to the fan who makes the largest donation.

In other Duran Duran news, the band were recently honored with ASCAP's Golden Note Award, one of the top acknowledgments that ASCAP bestows upon songwriters, composers, and artists who have achieved extraordinary career milestones. Recognizing the global success and body of work of the band, ASCAP President Paul Williams affirmed, "Duran Duran revolutionized popular music. They are the pioneers of the synthpop and new wave movement and have reached a stratospheric level of success that is rarely seen in the industry." Prior to that, the band were presented with the first-ever Video Visionary Award at the 2015 MTV Europe Music Awards, honoring their "strong visual presence" and for influencing a generation of musicians with some of the best pioneering music videos of all time.

Duran Duran will release a limited-edition deluxe vinyl box set of Paper Gods through Vinyl Factory later this month, featuring previously unreleased material from the Paper Gods recording sessions. The band will perform three shows at the end of the year. Please see below for dates. Ticket info can be found HERE.