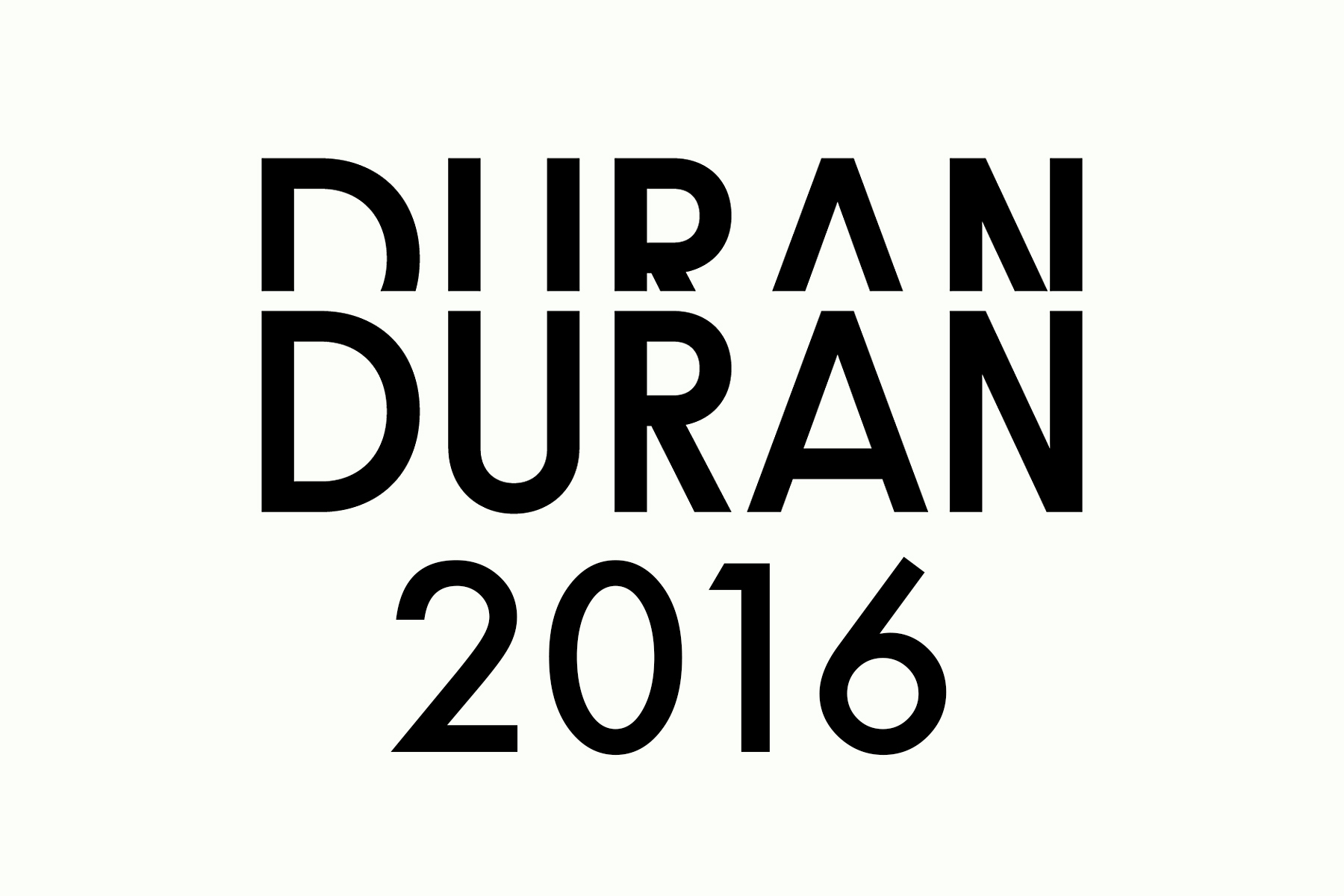 How did 2016 shake out for the members of Duran Duran? Read below!

Event of the Year – Brexit in the UK and the US Presidential Election (tie).

Album(s) of 2016 – Bob Marley’s LEGEND. I re-discovered the album this year, and it brought me back to my youth. I also loved David Bowie’s BLACKSTAR album.

Concert of 2016 - Seeing Stevie Wonder play live at Snowmass in Aspen was a big moment, as was meeting him. He’s a legend!

Favourite Duran Duran Moments of 2016 - Playing at the Festival d'été de Québec was really memorable for all of us, I think we were taken aback by how much Canada supports Duran Duran! And of course, playing at the Apollo Theatre in Harlem, NYC.

Personal Highlight of 2016 – Performing with John on the “No Rewind” track with the kids who are part of Road Recovery. I loved being a producer for a day!

Event of the Year – For me, it was David Bowie’s passing. David leaving the planet was truly momentous and I am still wrapping my mind around it. He was a giant to me, his death shook me up the most.

Album of 2016 – I am surprised at how much I love/loved the album A SEAT AT THE TABLE by Solange. It’s groovy but it doesn’t try too hard, it’s compelling, I love it. I love it.

Movie of 2016 – “Arrival” starring Amy Adams. I loved it. Amy is fantastic in it. The music, the sound, the design, it was incredible.

Book(s) of 2016 – I am almost done with “Lonely Boy” by Steve Jones. It’s so funny and so real. He had an interesting childhood, it was cool to read about the Sex Pistols experience from his point of view, and Steve has an amazing bullshit detector, I never tire of that period in time anyway. My New Year’s resolution last year was to not start a new book until I finished the one I was reading, and it was hard!

Favourite Duran Duran Moments of 2016 – Signing the petition against HB2 at our show in North Carolina in April. We don’t usually do things like that; it was a pull from the U2 playbook! I was really proud of my band in that moment. It felt really good.

Personal Highlight of 2016 – Doing a picture with Stevie Wonder right before he went on stage at the Aspen Snowmass Festival in September. There are so few ‘giants’ left for me, and he’s one of them. I am getting to the age that I really appreciate those things. Also, I voted twice in the States, and both times I lost!

Looking Forward to in 2017 – At this point, I haven’t made that many plans. I am looking forward to not having my “reading resolution” to deal with!

I am hoping the band gets to go back to Japan, I love that country. I always want to do a better job - being a better friend, a better husband. I am looking forward to more Duran Duran shows, and I just want to keep on keeping on.

Event of the Year –On a personal level, it is all the people we’ve lost, including David Bowie, which was a great shock to all of us, and was the artist who had the most impact on Duran Duran. Three of my heroes – David Bowie, Prince and Leonard Cohen, died this year.

Album(s) of 2016 – BLACKSTAR by David Bowie was a strong swan song, although I find it hard to listen to. I liked the Leonard Cohen album, YOU WANT IT DARKER, another sad album was Nick Cave’s SKELETON TREE and, more uplifting, was The Weeknd’s STARBOY album.

Movie(s) of 2016 – “Nocturnal Animals,” Tom Ford’s movie, was great – the acting, styling, performances, the look. I also liked Tim Burton’s “Miss Peregrine’s Home for Peculiar Children” and “The First Monday in May” a great and fascinating documentary about the Met Ball.

Book(s) of 2016 – I have a pretty severe photography book collection habit as some may know. Two that have stood out to me this year: “Night City” by Anthony Cannes; he makes this handmade limited edition books, it is an object of art as well as a photography book, and it is quite exquisite. There is also a Japanese photographer I like, Daisuke Yokota, who has a book called Matter / Burn Out, again exquisitely beautiful.

(Some) Gallery Shows of 2016 - I saw a small show in February at Michael Hoppen by a photographer called Fukase that showed all the images from the book “The Ravens,” which is beautiful. This ties in to the “My V&A” short film I did for the V&A. I love The Victoria & Albert Museum, it has so much history. So tying it together, I chose a set of the Fukase photographs as one of the things I mention in my film. I liked Elton John’s photo collection at the Tate Modern, and I hugely recommend that. He has put together the best of the best. I saw Beyond Caravaggio at the National Gallery in London. It was one of the best things I’ve ever seen.

Live Show(s) of 2016 – I saw The Cure, who I’ve seen lots of times, at Wembley, I always find them incredibly uplifting. I also saw Bjork at Royal Albert Hall, which was remarkable. I also saw “Lazarus,” the Bowie musical, the last thing he gifted to us all before he left.

Favourite Duran Duran Moments of 2016 – We had lots of highlights this year: I particularly liked The Barclay Center, the show in North Carolina where we signed the petition, the Italian tour was divine, as always. On my birthday we played in Verona, which is a startling gorgeous arena, and the band organized a tenor to come on stage and sing “Happy Birthday” to me. I was quite touched. Of course, the Eden Project in Cornwall was great. Oh and finally – Buckingham Palace in March – that was fabulous.

Personal Highlight of 2016 – I loved playing shows on the tour, I very much enjoyed all the museums I visited this year, I’ve also been working with Bloom Twins album, which is close to completion, and has been an absolute pleasure for me.

Looking Forward to in 2017 – Finishing the musical John & I are working on, the photo book I had intended to put out in 2016 (!) and Duran Duran stuff – heading toward the band’s 40th anniversary – and maybe working on some more Duran Duran music.

Event of the Year - 2016 has had some huge, huge events in it – magnificent and tragic as well. Brexit was a very big event, which was an amazing world-changing political happening. It was amazing because people were allowed to voice their opinion, it was momentous. The ongoing war in Syria is so sad and tragic.

In America - your vote for an extraordinary candidate, President Elect Trump. I wasn’t a big fan of either Hillary Clinton or Donald Trump, but at least Trump came to a Duran Duran show! And it’s important to remember that if he breaks rules, he won’t stay in power. Also, the Olympics were incredible AND we had Andy Murray winning not only Wimbledon but he is also the world’s number one tennis player!

Movie of 2016 – I am deferring until next year. I haven’t seen much this year. I am waiting to see “Nocturnal Animals,” which is supposed to be brilliant.

Book(s) of 2016 – “The Essex Serpent” by Sarah Perry. It’s a love story, sort of, about the Victorian era, and the struggle between religion and science. It was so well written. It’s as good as a book could get.

Also, “A Brief History of Seven Killings” by Marlon James. It was amazing, I listened to it as an audiobook and it was spoken in Jamaican patois. It made the experience incredible, though it takes awhile to get used to how they’re speaking. “One Big Damn Puzzler” by John Harding was also quite good, very funny.

TV Show(s) of 2016 - I just watched “The Missing,” a fantastic show in the UK. I love “Vikings, that’s brilliant, lurid, sexy. “Penny Dreadful” is pretty good too. The UK re-make of the Swedish thriller “The Bridge” -in the UK they call it “The Tunnel” - I think it’s brilliant, really good.

Album of 2016 – I like stuff like Plan B and Tame Impala, fun records, and there were a lot of serious albums this year. I will choose Beyonce’s “Lemonade” as an overall project.

Favourite Duran Duran Moment of 2016 – The tour. My head is still IN the tour. There was a real consistency to all our shows on the Paper Gods tour, all the shows were on the level.

Personal Highlight of 2016 – The tour. Nothing compares to being onstage for me.

Looking Forward to in 2017 – The tour! I am looking forward to playing more shows. When I am in this mode, it’s the most important thing in my life. I love it. It is easier for me to make decisions because it’s about the tour – is this productive or counter-productive to the tour? That’s how I make decisions.

Previous Article
From Prince to Bowie to Carrie Fisher, Death Came for Dozens of Pop Culture Icons in 2016
Next Article
2016 Holiday Greetings from Duran Duran
News
Back to all news