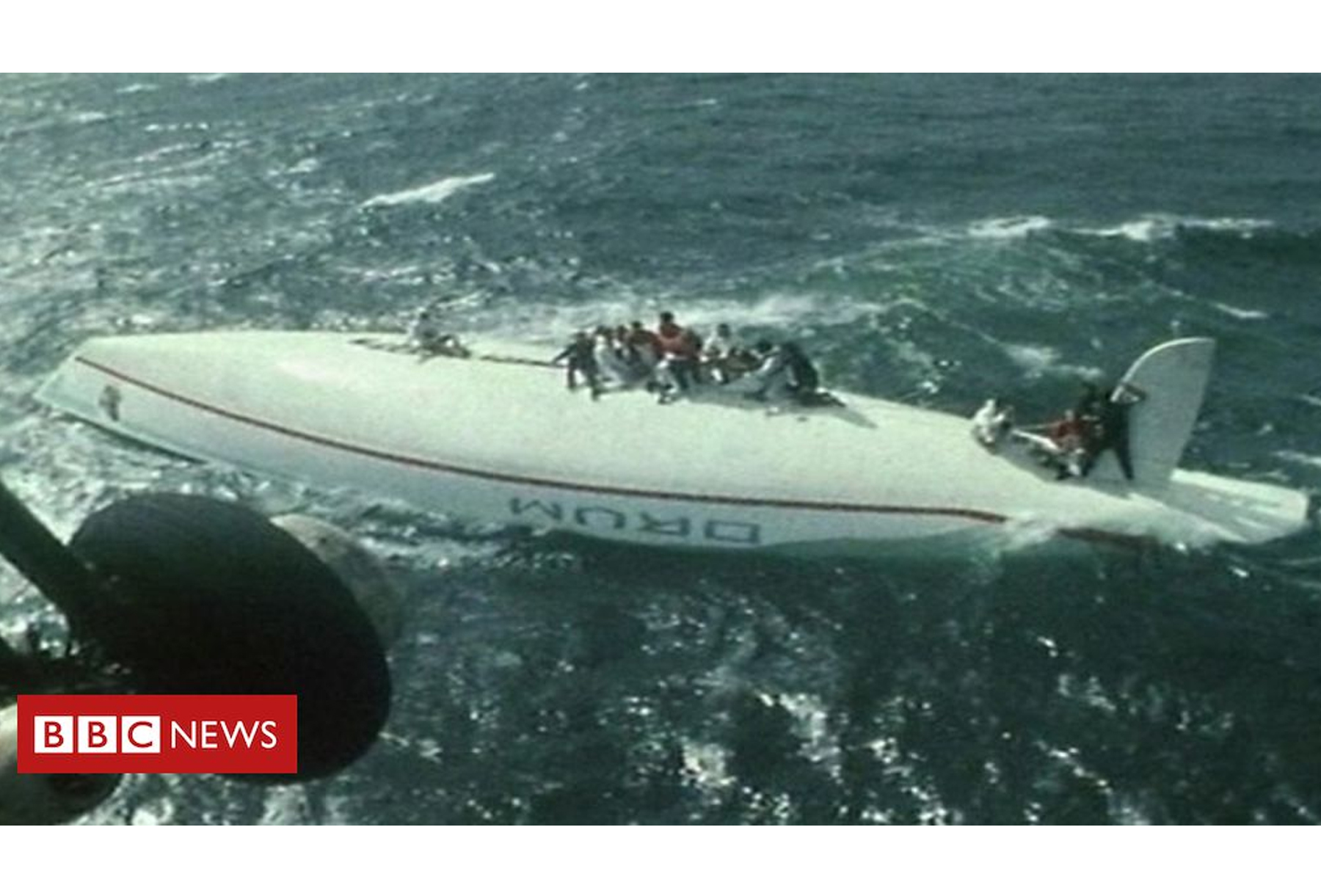 In 1985, pop star Simon Le Bon "looked into the eyes of death" when the yacht he was racing capsized. Thirty-one years later, he watched footage of the dramatic sea rescue for the first time. "It's the most dangerous situation I've ever been in," said the Duran Duran front man.

During the Fastnet race, which Le Bon was using in preparation for an attempt to sail around the world, his 71ft craft Drum ran into difficulty off the Cornish coast. The keel broke and the boat capsized, trapping the crew underneath.

Just three years earlier, keen yachtsman Le Bon and his bandmates had been sailing around the Caribbean filming the video for their Top 10 hit Rio - one of the 80s' most memorable pop promos.

But now he found himself stuck underneath an upturned vessel, a mixture of diesel fumes and battery acid filling his lungs. "That was when I looked into the eyes of death," he said. As the crew lay trapped inside the yacht, they heard the beating sound of a helicopter overhead, as the 771 Royal Naval Air Squadron began its rescue mission.

Le Bon was trapped inside for 40 minutes, with water around his legs before help came, along with five crew members. The rest of the men on board scrambled on top of the upturned boat, managing to communicate with their colleagues through the hull.

"It wasn't completely black because we had the refracted daylight coming through the sea. It was wet, and everything was upside down because you're walking on the ceiling," Le Bon said. The singer's own rescue began when diver Larry Slater from 771 "popped up" inside the boat and began to lead him to safety.

"I had to go down to come up. I dived in and started going up - as I came up the waistband of my long johns got caught and pulled down.

"As I came up to the surface I stopped about 2ft away. I wanted to breathe but if I did I knew that would be the end of me.

"I managed to get them off my feet and came up with a big smile on my face.

"I got winched off into the helicopter and one of the guys called 'Hey Simon, where's your pants?' because I was just stood there in my knickers.

As he watches the footage, a wry smile spreads across the singer's face as he sees himself back on dry land, clad in a white jacket with his bare legs on show.

"There's me, there's a rock star in his underpants."

He said it was "heartening" and "amazing" to see himself and his fellow crew members being plucked to safety. "I [thought about] it a week afterwards and it made me shake. It was very frightening," he said.

The squadron which rescued Le Bon and 26 crew members will be decommissioned this week after 41 years based at Culdrose, Cornwall.

It is thought to have rescued about 15,000 people in that time.

Major rescues include the 1979 Fastnet race disaster, when more than 70 boats capsized and 19 sailors died, and the Boscastle floods in 2004 when dozens of residents were winched to safety. Now, its responsibilities have been handed over to a commercial operator handled by the Coastguard.

"I am grateful to 771 Squadron for saving my life, for saving the lives of the other guys on Drum," he said. "These are guys who face extraordinary danger on a daily basis." He has met diver Mr Slater twice since his ordeal inside Drum. Slater was awarded the George Medal for the rescue, given for acts of great bravery.

"I know they have to look at it as just a job because maybe it would become something they couldn't face. But it's a hell of a job."